According to the report, high school computer science education is on the decline. The number of introductory CS courses offered is down 17% from 2005 figures.

The report also finds that while some states do focus on "technology literacy," this is almost exclusively focused on using computers in other learning activities and not on building the conceptual skills associated with logic and programming. Furthermore, only 10 states allow computer science courses to count towards graduation requirements for either math or science. And no state requires CS courses as part of graduation requirements.

The lack of K-12 computer science education may be one of the factors contributing to the gender disparity in the industry. In 2008, the report says, 17% of AP computer science test takers were women, even though women over half of all AP test-takers. Further, only 784 African American students nationwide took the AP Computer Science exam. Learning CS becomes "privileged knowledge," and unlike other sciences where students can enter college with some background in the major, many of those entering university as CS majors will have had little or no prior academic training.

While there's a lot of talk about promoting science, technology, engineering, and math (STEM) education, there seems to a lot of work necessary to actually bring this to K-12 classrooms in a systematic way. The ACM and CSTA have a list of recommendations in the report, including certification and standards efforts. 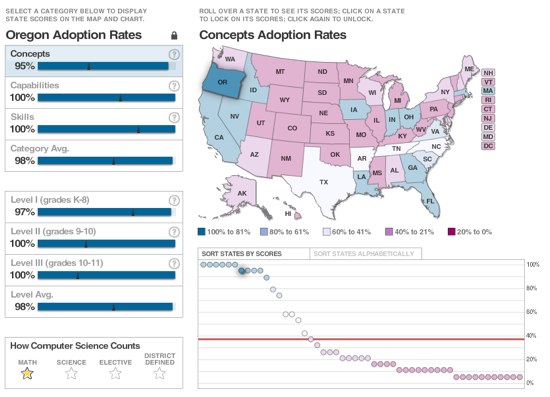