Pew Internet Report Examines the Adoption of Gadgetry By Generation

The Pew Internet and American Life Project has released its latest report, this one detailing Generations and Gadgets (PDF). It's an interesting look at the adoption of various computer devices, which are increasingly popular but whose adoption is still vastly different based on age. Not surprisingly, Millennials lead the way in gadgetry ownership in almost every category in the study.

Among the report's main findings:

Cell phones are by far the most popular device among American adults, particularly for adults under the age of 65. Approximately 85% of adults own cellphones (the report doesn't distinguish between smart- and feature phones). Taking pictures (done by 76% of cellphone owners) and text messaging (done by 72% of cellphone owners) are the two non-voice functions that are the most popular among users.

Millennials (those 18 to 34) are the only generation that is more likely to own a laptop computer or netbook than a desktop: 70% own a laptop, but compared to 57% who own a desktop.

Millennials are also the most likely to have mp3 player. 74% of those age 18-34 own one, compared to 56% of the next oldest generation.

5% of all adults own an e-book reader.

Tablet computers, such as the iPad, are most popular with American adults age 65 and younger, but just 4% of all adults own this device.

About one in 11 (9%) adults do not own any of the devices the survey asked about, but that figure jumps to 43% of adults when surveying those age 75 and older. 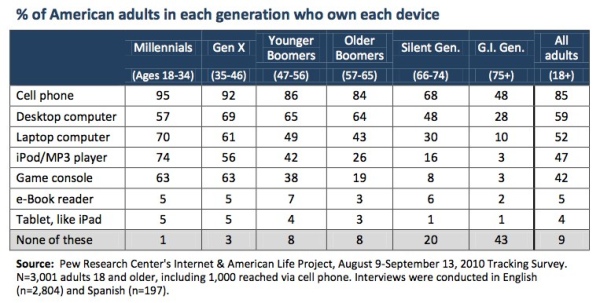 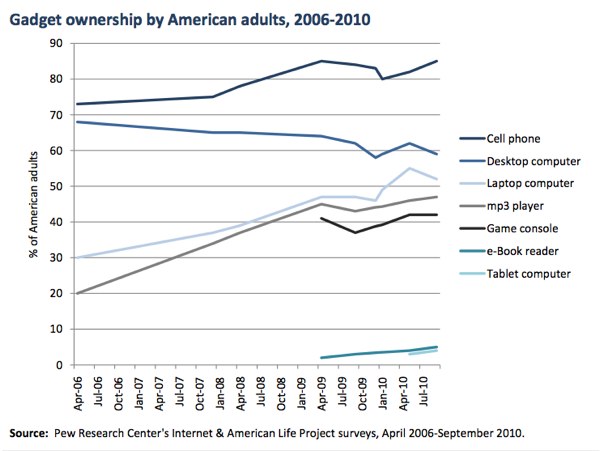