PBS, in conjunction with Grunwald Associates, has just released its 8th annual survey (PDF) on teachers' media and technology usage. Not surprisingly, the survey finds the increasing importance of digital media and Internet technologies in the classroom. Teachers say it helps them do their jobs better and helps students be more engaged with learning.

The survey reveals a number of challenges that teachers face when using digital media in the classroom, including issues with broadband access that can make streaming video virtually impossible. 78% of teachers responding said they experience problems with streaming content at least some of the time (21% saying they often do).

Another challenge is, of course, budgets. And the survey shows teachers are turning to free resources and to their own pocketbooks in order to supply their classrooms with digital media technology. 35% of respondents said they use free resources. 25% said that they spend their own money to provide technology resources for their classrooms. And 40% said that their schools and districts covered the tab. Teachers cited cost as the major barrier to using tech resources in the classroom.

Interactive whiteboards topped the list for technologies teachers said they want, but don't have, well ahead of laptops and computers.

The teachers surveyed cited the following reasons for their preferences for interactive whiteboards: it helps them be more effective and more creative. It helps increase student motivation, discussion, and creativity. And 70% said it is directly related to student achievement.

What About Mobile Technologies?

I'm surprised by the strong affinity for interactive whiteboards, in part, because I see them as a substantial financial investment for districts and something that need not necessarily challenge the traditional teacher-focused classroom (despite the promise of "interactivity").

I also see them to be a very different sort of tech investment than one-to-one and mobile devices. The respondents in the survey, however, saw interactive whiteboards in a much more positive light than mobile devices, and interestingly, saw cellphones as having the least amount of educational potential - a very different take on phones than a recent article in THE Journal where Eliot Soloway argues that phones may be the device that bridges the digital divide. 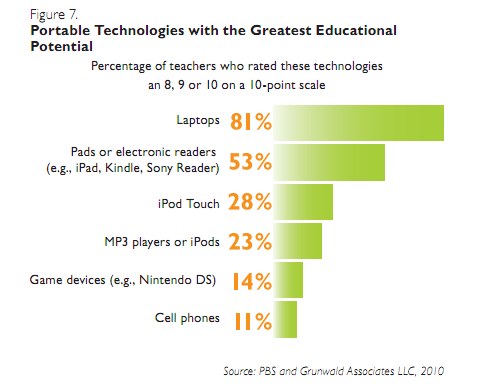 I can't help but balk at the notion that interactive whiteboards will bridge any digital divide, and as the PBS study points to the amount of free tech resources and teacher-funded tech resources that are used in the classroom, there does seem to be a real disconnect between the push for whiteboards and the realities of budgets and mobility.

I'd love to hear others' thoughts.