The new app from Educreations is available in the Apple App Store today (iTunes link). The app is designed to make it easy to create, narrate, and record whiteboard video tutorials on the iPad and to share them with others.

A Web version of the startup's whiteboard app has been available for some time now, but it's the native app for an iPad that makes this sort of tool make sense -- it's so much easier to write on a whiteboard with the finger than it is with a mouse, if nothing else.

Educreations is hardly the only app like this available for the iPad (I covered the very similar app ShowMe over on MindShift this summer, for example). But while Educreations' iPad app might be late to the whiteboard app market, its entry is a solid one.

The app offers several features that set it apart from its competitors: lessons can have multiple pages; you can add images to the tutorials -- from the iPad camera, from its Photo Library, or from Dropbox; you can move and resize images while you record. The ability to create via a Web browser -- any Web browser -- and not just via a tablet is a really important thing to consider too when looking to adopt this tool for a classroom. 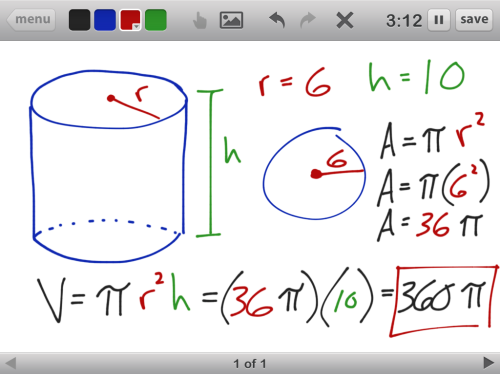 Educreations hosts the video creations themselves on educreations.com (helpful for schools that block YouTube), and teachers using the site can opt to share videos privately with a set group of students or share them publicly so anyone can see them. (You can also embed the videos into blogs or share them on Twitter or Facebook).

Some of the challenges that Educreations (and others) will face: making sure the video content posted there is discoverable, relevant, and high quality.

Teachers do want to be able to contribute to that body of video content, I think. But even with the growing popularity of the idea of "flipping the classroom" (see my recent Khan Academy trends post), there's been little discussion about how labor- and tech-intensive it can actually be to make video lessons. Startups like Educreations hope to be able to tap into this trend, but make the process simpler for teachers to both create and share this content with their students.

Educreations was part of the inaugural class at Imagine K12 this fall. The app is free for now, and the startup isn't clear on how it plans on making money in the future. (As a comparison, its competitor ShowMe has licensed its technology to the Princeton Review). But the entrepreneurs behind Educreations aren't new behind turning a smart app into a lucrative deal. Co-founder Wade Roberts was behind the popular "Pieces of Flair" Facebook app. That company was acquired by RockYou in 2008.