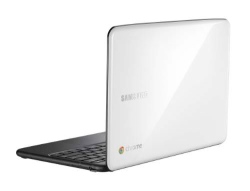 On stage at FETC today, Google announced that "hundreds of schools in 41 states" have adopted Chromebooks in one or more classrooms, and some 27,000 students in 3 states -- Iowa, Illinois and South Carolina -- will soon go 1-to-1 with the devices.

Just one week go, Apple took the stage to boast over 1.5 million iPads in use at educational institutions in the US, with some 1000 schools having 1-to-1 iPad programs. By comparison, the Chromebooks hardly seem to have had much uptake yet.

That's not to say these devices aren't suitable for the classroom. To the contrary, there are a lot of good reasons why schools might opt for these lightweight, Web-centric devices -- particularly those schools that opt for laptops (and/or netbooks) over tablets. Indeed, Google continues to tout all the reasons why schools should consider Chromebooks: they cost less than other laptops; they're easier for teachers and IT to manage; and they're "great for students."

Google says that new updates are pushed out to ChromeOS every six weeks or so (and the laptops are automatically updated, without having to deal with installing new software), and among the changes that the company has added since the Chromebooks launched at Google IO last year are a number of features to make it easier for students to get up and running. Students are actually able to unbox the machines themselves. "Once the device shows up, it's ready to go," says Google Product Mananger Rajen Sheth. "It's already tied in to the school's policy management."

That control is particularly important for schools because even though Google says it wants to show students the power of the open Web, CIPA requires schools restrict students' unfettered access to it. Chromebook administration means that different policies can be set for high school, middle school, and elementary school students in a district, as well as for teachers. And certain sites can be black- or whitelisted.

But none of these features -- great though they are -- are really new (or "news"), and it was clear based on Google's remarks at FETC today that it just wants to remind districts that the devices are still an option. Will the new Samsung models unveiled at CES earlier this month help the cause? Sheth didn't think so, telling me that the current devices have the right battery life, computing power and price tag.

Sheth contends that the adoption, while slow (and certainly less hyped than the iPad craze), is following similar patterns he saw with the move to Google Apps for Education. "It took a few to knock over the barrier," he said, and now that initiative boasts some 15 million users.

While "slow and steady" worked out well for The Tortoise, it remains to be seen if it's going to help The Google win (or place in) this race. (But I am ready to admit that at least one of my 2012 predictions -- that Chromebooks would get the ax -- will be wrong.)