Google+ Opens to Teens: Will Teens Care? Will Schools Use It?

Google+ is finally open to teenagers, according to post today by VP of Product Bradley Horowitz. When G+ launched last year, it was only open to those 18 and older, and even when the social network expanded to Google Apps for Education users, it maintained the age restriction.

With today's announcement, that restriction is no longer in place (as long as you're over 13, that is and in certain countries*).

Google has stated repeatedly that it wanted to "get things right" when it came to opening up the service to teens, and the news today comes with several "safety enhancements" to help teens navigate their connections there. Some of these are akin to warnings that all users received when they first started using the service -- a cautionary note when you try to share content outside your Circles. Google has also made it easier for teens to block other users, and by default, only those in teens' Circles can interact with them (although teens can adjust these preferences).

Google's also beefed up the security around Hangouts, so that if someone outside a teen's Circle joins a Hangout, the teen is temporarily booted and her/his microphone and camera are muted. The teen can then opt to rejoin or leave. (This is something that teens might find a little annoying if they're trying to participate a public hangout.) 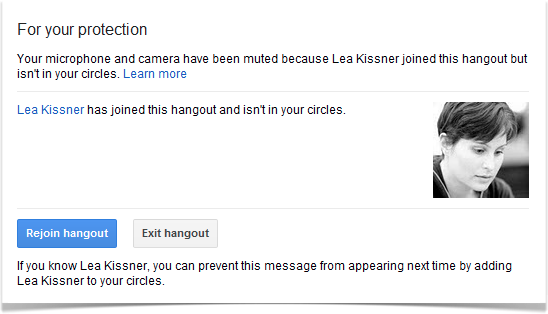 In describing the changes to the age-restrictions on G+, Horowitz makes a not-so-subtle jab at the social network of choice for many teens -- Facebook -- a site that has allowed teens for some time (indeed Facebook was open to high schoolers before it was open to the general public). Horowitz argues that "In life, for instance, teens can share the right things with just the right people (like classmates, parents or close ties). Over time, the nuance and richness of selective sharing even promotes authenticity and accountability. Sadly, today’s most popular online tools are rigid and brittle by comparison, so teens end up over-sharing with all of their so-called 'friends.'"

So will the safety features Google has added help teens learn how to have better control over what they share and with whom? Will G+ be an appealing site for teens? Will they actually want to go there?

And will Google+ now integrate with Google Apps for Education at all tiers, not just at the university level?  (And if it's available, will school IT administrators opt to turn it on?)  There's certainly a lot of potential here, I would argue (an argument I made upon my first perusal of the site back in June of last year). As Google+ has rolled out new features -- better integration with Google Docs, for example -- there are a lot of reasons why a Google Apps for Edu school might find G+ incredibly useful for communication and collaboration -- among classes, among students, across campuses, and with the rest of the G+ community.

But that last piece remains scary -- to many schools and plenty of parents.  You can see the comments on Bradley Horowitz's post for plenty of examples of the arguments that we need to keep kids away from the open Web, away from social interactions, away from stranger-danger (which is I guess what happens when the two combine).

And in light of the newly updated privacy policies from Google, there are probably additional concerns too about how young we're entering into the world of the Google ecosystem.  In terms of "social," it's now not just adults who can get "plussed."