It's hardly surprising to see Pearson launch a new website today -- Alleyoop -- that will promote both college preparation and career readiness. Indeed, the high rate of dropouts and low rate of college completion are causing a fair amount of hand-wringing by politicians, parents, educators and businesses. Anything that helps students become more prepared to compete in the global economy seems eminently timely and important.

Interestingly, I've watched Kalimah Priforce work on a similar idea for over six months now. I first saw him pitch the concept of Qeyno -- what he describes as "career spotting for kids" -- back at a Startup Weekend EDU in San Francisco last June. Looking back at my notes from that event, this is what I wrote: "expanding social networks so that students can have social mobility, connecting their interest with careers. Gamification - 'missions' [confusing]" When Startup Weekend EDU returned to San Francisco in October, Priforce was there again, still pushing Qeyno forward. His pitch was better the second time around -- much better, I thought. (Again, from my notes: "focuses on helping girls learn about and prepare for STEM careers.") But as he noted in a follow-up blog post to that event, the judging panel seemed uninterested and unimpressed.

All of this is neither here nor there, I suppose you could argue, when it comes to Pearson's new product. Lots of people are working on lots of ideas simultaneously. Big corporations. Little startups. There shouldn't be just one way, just one product, just one company addressing a problem. May the best product win, et cetera et cetera.

And no doubt, what Pearson has built for Alleyoop looks fairly slick. With it, teens can enroll for a service that assesses their skill level and topic interests and helps match them to level appropriate exercises, as well as videos and live tutors. The site is just focused on math content for now, and as such pulls from Pearson's MyMathLab curriculum (which means in turn it's integrated with Knewton's adaptive learning engine).

Alleyoop has a number of game mechanics too, geared to move kids through "missions" -- earning points (or "Yoops" -- a virtual currency) to spend on unlocking more features and lessons and on getting one-on-one tutoring help. 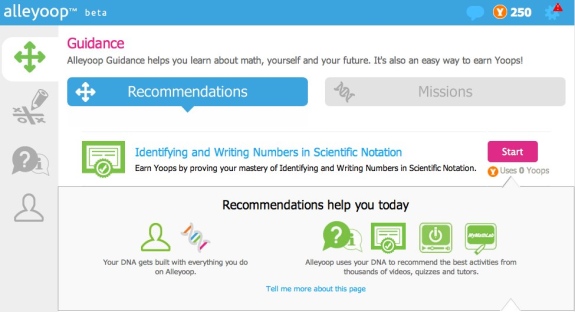 But none of this comes for free. The basic Alleyoop plan starts at $29 per month -- that gets you 2500 Yoops, 2 tutoring sessions and "unlimited math activities." There are two higher-priced tiers -- $59 and $99 per month -- that come with more Yoops and more tutoring.

Which brings me back to Kalimah Priforce's startup Qeyno. What he's built thus far is nowhere near as polished as Alleyoop, but I'd say that it aims at a deeper core of the problem of college readiness and career prep. In his pitch last fall, he noted that 26% of high school seniors paid private college and career consultants anywhere from $8000 to $40,000 for counseling and tutoring services. (On its pricing page, Alleyoop rates itself against some of the big names in that industry: Sylvan Learning, Tutor.com, and the Kumon Learning Centers.) For the other 74% of high school students... well, there's the Web, the library, (maybe) a school career counselor.

Qeyno wants to address that opportunity gap -- in part by off-loading the subscription fee for the site to businesses who'd sponsor "missions" and career challenges on the site as well as by offering the teens mentorship opportunities. Mentors, not just tutors.

I'm sure some folks will object to the comparison here between a small (2 person?) startup and one incubated by a giant education company. But in light of the recent partnership between Pearson and Startup Weekend EDU, the comparison strikes me as particularly important. I can't help but wonder if I'll hear Kalimah Priforce pitch Qeyno the next time Startup Weekend EDU rolls around to the Bay Area. (If he does, I hope he gives 'em hell). If nothing else, the launch of Alleyoop by Pearson shows that others think game-based career counseling project is a good idea. And the price tag for Alleyoop suggests that there's still opportunity here to "get it right" -- this isn't going to solve the problem for the kids who might benefit the most. If Priforce pitches Qeyno again, I'll be watching to see how the investors on the judging panel (and those Pearson mentors on the sidelines) respond.