I first covered ClassConnect last fall, as the startup was part of the ImagineK12 education incubator program. At the time, ClassConnect was building a pseudo-LMS -- I say "pseudo" as while it contained some features of an LMS (a calendar, for example), the emphasis was always the course's content (and collaboration and communication around the content), rather than on its administration.

ClassConnect founder Eric Simons has gone back to the drawing board with the latest version of his startup's product, scrapping the LMS features (yay!) and focusing instead on lesson-building and lesson-sharing.

GitHub is a repository for open source code (based on the distributed version control system Git). Version control means that multiple copies -- changed or duplicates can be maintained and tracked. Because of the open source nature of Git, you can also "fork" a project -- that is, you can take the base-line code and then take the original down an altogether different branch. It's a branch that always recognizes and is traceable to the source. But it's one that makes this sort of rapid transformation -- and attribution -- possible.

GitHub also lets coders built out rather powerful profiles built on how much they contribute code back to the original (or branched) repository. You can see what developers and companies are working on. You can "follow" their repositories. You get notifications when code changes in the projects or people you follow. And you can participate with your own code.

Create. Replicate. Fork. Give back. 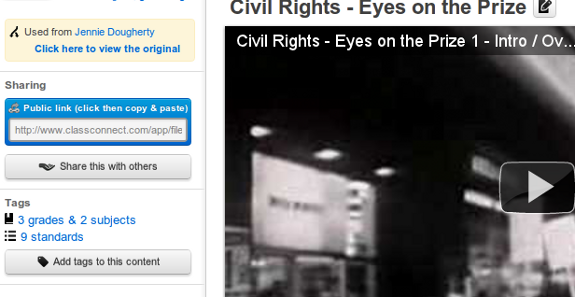 So that's what Eric Simons hopes to create here with the latest version of ClassConnect. There are plenty of other lesson-sharing platforms that rely on teachers simply buying lessons from other teachers. But if ClassConnect can really build upon the GitHub model, then it might really be onto something: create your lessons plans. License it openly. Allow it to be downloaded and replicated. Allow others to fork your content. Encourage people to give back their "code." Let people monitor the changes. Let them contribute.

ClassConnect is free -- for now and for always, says Simons. He adds that the focus of his startup is to save teachers time, "because by essentially crowdsourcing lessons, they have more time to focus on 'teaching and inspiring their students'." It's an effort that taps in to the whole "more eyes on the code" model that has helped open source blossom. Frankly, I'd love to see more of that same ethos and technology infrastructure blossom in education.