Over the course of the past month, I've been working on a research project for Mozilla, asking a bunch of smart folks -- technologists and teachers -- whether or not the organization should build a tool to help boost Web literacy and help create more Web builders (and if yes, Mozilla should build a tool, what should it look like). 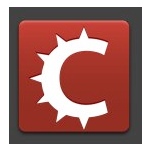 The following interview is an interview with Joe Dolivo, developer relations and education lead for the startup Stencyl.

It's been almost a year since I covered the Stencyl's launch, back when I was still writing for ReadWriteWeb. After I blogged about the idea of a Mozilla-made "Scratch for HTML5," Dolivo contacted me reminding me "that's where we're headed." Indeed, that was what interested me in the startup's pitch when I first heard it last year -- when I saw that its game-creation tool was so Scratch-inspired, emphasizing building blocks rather than code.

It's hardly the only other Scratch-inspired project, of course. The Android App Inventor, for example, also uses this sort of drag-and-drop interface. Stencyl has also modeled itself on Scratch with its "StencylForce," its own game development community. This will allow users to get support and ideas from one another, as well as share and download openly-licensed resources.

What's new with Stencyl: Note to self: do a better job following up on edu startups. Although in fairness, I should note, Stencyl didn't really intend to be an education company, but a DIY game development one. Nonetheless Dolivo says there's been a lot of interest from educators, and the startup has responded in kind, offering an educational discount and plans in the works for more teacher-tailored and school-oriented products as well as curriculum.

When Stencyl first launched, you could just make Flash-based games. (You still can) Now, you can make iOS apps too. There's a free version of the software to do so, allowing you to build apps for your own device; for $149/yr ($99 for the educational license) you can publish what you create to the App Store.

Redesigning an intimidating interface: Even with its Scratch-like building blocks, Stencyl's still got a fairly steep learning curve and the interface can be rather intimidating -- that's been the feedback from a number of uses, says Dolivo, who says that the forthcoming Stencyl 2.0 will address this. It'll do so in part with a UI redesign to hide some of the building block components that you'd otherwise see at once, streamlining the way the logic appears (See image). 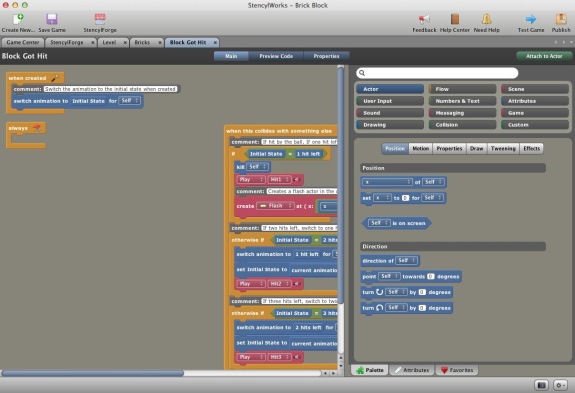 Interest in mobile game development: Stencyl's move into iOS games certainly indicates the strong interest in mobile game development. As Dolivo pointed out, "apps are cool." Where once the goal might've been to put your game up on a Flash portal, now it's getting your mobile app in the app store. Kaching. People want to be able to monetize what they build too, and Stencyl can help them integrate adds.

Games are an important entry point for CS. The "stigma associated with being a gamer and game creator really gone down," says Dolivo. It's particularly important then, he adds, that the company can "democratize game creation."

"Marrying the idea of block and code": There's interest in game creation, sure, but also easy game creation. People want a quick way to prototype things. Stencyl does so, according to Dolivo, by "marrying the ideas of block and code." You can rely on the GUI, something that "lowers the barriers to entry." More advanced users can import their own code, toggle back and forth between the block-building GUI and code. There are also special blocks in which you can enter your own code. Stencyl compiles all the blocks down to native code. Coming soon: a full programming IDE.

A tool for learners and a tool for indie-pros: Stencyl is a tool for hobbyists, programmers, indie-developers, students -- it's a "real" tool. Dolivo points to some of the limitations Scratch -- its limited performance, and perhaps the age-appropriateness/appeal. "We want to be the Unity of 2D games."

What about the Web?: When I covered Stencyl upon its launch last year, the startup said that HTML5 was in the works. It's still in the works, says Dolivo but admits that Android is the next priority as "the big opportunity is in the mobile space." HTML5 performance has held the startup back too in making the leap to HTML5 game development, he adds, although that's definitely changing. Dolivo says that eventually they will build for the Web. "Everything will eventually run in the browser."