Long before the buzz about the “flipped classroom,” there was buzz about the “Flip camera,” a low-cost but good-quality, easy-to-use video camera. Teachers and students loved it. But the company behind the camera, Pure Digital Technologies, was acquired by Cisco 2009 and production was halted in 2011.

Today, two of the executives behind the Flip Camera are unveiling their latest venture, Knowmia, a collection of “crowdsourced video lessons.”

All of this is a pretty familiar narrative in Silicon Valley: entrepreneurs found a startup that gets acquired; the company that buys the startup doesn’t simply absorb the technology or employees, but actually shuts their product(s) down; the entrepreneurs leave the company and found another startup in turn. And increasingly, the narrative includes something along the lines of “I’m a parent now, and I want to do something to improve education.”

On one hand, Knowmia’s founders Ariel Braunstein and Scott Kabat may be well positioned since the branding of their former company’s feature product coincides so neatly with one of the hottest trends in education right now. But there seem to be a lot of challenges ahead too – and not simply because consumer hardware guys and moving into educational software.

And specifically, moving into educational video where there are lots of offerings already – vast video libraries on YouTube, as well as other sites that offer online lessons (video or otherwise). Knowmia is pulling some of this content into its site – it currently touts about 7000 videos – and hopes to employ a teacher-driven tagging system so that the content is more easily discoverable. (Pity this doesn’t tap into the Learning Registry or the LMRI – although it’s not too late to do so!) 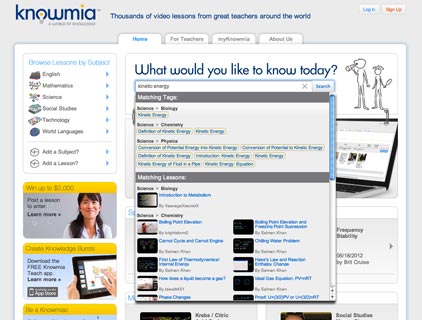 Knowmia will also host videos, a move that might assuage the fears of some schools that YouTube doesn’t just serve up quality video content, but serves up advertising as well as sometimes inappropriate related videos (although not so much with its new YouTube for Schools channel).

The startup, which is part of the latest batch of Y Combinator companies, says it plans to “add value” to these videos by creating mini-courses – that is, having teachers in certain fields frame recommended viewing lists, as well as add other elements like assessments. The company also has an iPad app (iTunes link) so that teachers (or anyone really) can create their own lessons to share on the Knowmia site.

There’s a “certain ‘magic’ that happens when a teacher and student match in style,” co-founder Ariel Braunstein told me, “when that teacher can explain things to a student that no one else can.” The point of Knowmia, he argues, is to be able to present a wide-range of video lessons on a topic so that students can decide what to watch based not just on content, but on teachers’ presentation styles.

That stance certainly suggests that this is a consumer-oriented play and not (necessarily) a school-focused one. Braunstein says that Knowmia sees itself as a “supplemental education” tool and is chasing a piece of the tutoring market – currently at $54 billion in the US and expected to increase to about $100 billion in the next few years. But will parents want to buy video lessons for their children? Or will human tutors – on or offline – remain popular? How do classroom teachers fit into this model (and I mean that both pedagogically as well as economically)?

And will the “flipped classroom” become not just a buzzword for teachers rethinking how homework is done and how class-time is spent, but one that parents too start to embrace in lieu of traditional test prep and homework help?