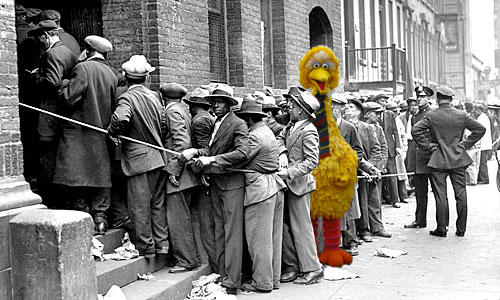 Wednesday night was the first of the 2012 Presidential Debates. I didn’t watch, but thankfully folks who did posted their running commentary onto Twitter. As the debate covered domestic issues, the topic of education did come up, and the Hechinger Report looks at what the candidates said. The key takeaway, if you trust the Internet memes, that is: Mitt Romney wants to fire Big Bird. And frankly, that has as much potential to damage education in this country as just about any policy decision I can think of.

In a move that should shock no one, Facebook has written a 20-page letter to the Obama Administration arguing that the newly-proposed COPPA rules shouldn’t apply to the “Like” button. “A “like” counts as free speech, the company has repeatedly argued,” writes The New York Times, “and muzzling a user’s ability to ‘like’ something on Facebook would infringe on a user’s constitutional rights.” Well thank goodness Facebook is looking out for our rights.

Live in Minnesota? Well then I hope you’re not taking classes through Coursera. Doing so violates the startup’s Terms of Service, as Barry Dahl has noted: “If you are a resident of Minnesota, you agree that either (1) you will not take courses on Coursera, or (2) for each class that you take, the majority of work you do for the class will be done from outside the State of Minnesota.” The restriction comes from the Minnesota Office of Higher Education that has informed the startup that under Minnesota Statutes (136A.61 to 136A.71), a university can’t offer online classes to the state’s residents without getting approval from the state. As Dahl quips, those who are looking for an education startup idea might consider setting up a coffee shop with free wifi just across the border where students can do their Coursera homework offline and legally together.

The Assocation of American Publishers and Google reached a settlement this week on the long-running Google Books lawsuit, resulting from the tech company’s scanning of in-copyright books and journals. The deal lets publishers choose whether or not Google can digitize their work. The Authors Guild, which is also suing Google for copyright infringement, has not resoved its lawsuit.

Wired GeekDad writer and early childhood education expert Daniel Donahoo launched his new startup this week. BetterApps offers assessment and consulting services to education app developers, asking them a series of questions about the products’ design all in the service of helping them build better educational apps. Donahoo was the co-author of the Children’s App Manifesto which was published last year and called for high quality and affordable apps for kids.

Recruiting site Entelo, founded by long-time education entrepreneur Jon Bischke, had its official launch this week. Techcrunch’s Rip Empson has a lengthy write-up on the startup.

Ginkgotree, a web app that makes it easy for professors to build and share digital course packets with students, launched this week. Read my write-up in Inside Higher Ed.

Skype’s education initiative, Skype in the Classroom, has added several new partners, including NASA, expanding the sorts of visitors that can virtually visit classes.

Online gradebook and lesson plan tool LearnBoost has rolled out support for several new languages, including German, Lithuanian, Greek and Russian. As these translations come from users themselves (i.e. LearnBoost crowdsources the translation of its Web app), it’s a good indication of the startup’s global growth.

“The road to ‘free’ is paved with misinformation,” says the Assocation of American Publishers, who released a statement this week about the recently signed legislation in California that would create a digital library of OER textbooks. Why, these aren’t free textbooks at all, the AAP argues, contending that taxpayers will have to foot the bill (about $5 million). Good thing the AAP is looking out for taxpayers. Perhaps they'll protest next the $200 million dollars spent on the taxpayer-financed Cal Grant B funding which is used primarily for -- you guessed it -- textbooks.

Research sponsored by the National Science Foundation has found that young children think like scientists. Alison Gopnik, a professor at UC Berkeley, says that “young children, in their play and interactions with their surroundings, learn from statistics, experiments and from the actions of others in much the same way that scientists do.” The research suggests that play and exploration promote scientific thinking better than direct instruction.

On Monday, the hacking group Team GhostShell posted data — some 120,000 records — they claimed came from some 100 major universities, including Princeton, Johns Hopkins, and Cambridge Universities. A “conversation starter,” the group called it, about the future of education — because I know nothing makes me want to talk about the future of education with someone than having my school email address and password posted onto Pastebin.

Kudos to Dr. Chuck for making available some of the demographics data from his recent Coursera course on Internet History — namely, where the students come from. A look at the maps he’s built suggests the answer is primarily the developed world.

Google announced this week that its Apps for Education offering now boasts some 20 million users in schools — K–12 and higher ed — around the world.

The publisher Wiley & Sons has acquired Deltak.edu, a company that helps colleges and universities offer online classes. According to the company press release, the acquisition price was $220 million and will “significantly accelerate Wiley’s digital learning strategy and diversify the company’s service offerings to include operational and academic solutions for higher education institutions.”

And Marjorie Scardino, the CEO of Pearson, will be stepping down at the end of the year. The new CEO will be John Fallon, who currently runs the company’s international education division. There’s talk that the publishing giant will be selling off some of its assets, including The Financial Times, and the leadership change certainly suggests that Pearson will remain committed to colonizing global education.

The University of California plans to launch an online academy for high school students this fall. “The Academy is a collaborative effort between UC Santa Cruz and the UC Office of the President, and its curriculum is well-proven.” As Gas Station Without Pumps wonders, what does “well-proven” mean for brand new online effort? Is this a rebranding of a commercial effort? A revival of the older UC College Prep materials?

The University of Southern Queensland announced the first OERu course, which will provide a way for learners to achieve formal academic credit for free learning opportunities.

The Hewlett Foundation has awarded the next $100,000 in its robo-grader contests, this time for the software that can best grade students' short answers. The winner: University of New Orleans student Luis Tandalla (who had never actually done any data science work until he took Andrew Ng's Machine Learning MOOC last fall). Robots teaching students to grade students with robots... or something like that.