2012 has been another banner year for Internet memes. Call Me Maybe. Hey Girl. Binders Full of Women. Texts from Hillary.

Recently University of Regina education professor Alec Couros made the case that memes are “an emerging information literacy and their study is important for comprehending the way in which information flows through systems.” He points to schools that have joined in the process of remixing popular memes (in this case, creating their own versions of Psy’s hugely popular Gangnam Style video) and argues that this is a “new culture of learning.”

The Year of the GIF? But following an animated-GIF-filled Olympics and Presidential Election, as well as the IPO of the GIF-sharing site Facebook, it’s not a huge surprise that the Oxford American Dictionaries looked for a visual and viral word to celebrate 2012. So “GIF” it is.

There’s been plenty of pushback on the selection, particularly since the Oxford Dictionaries told the British their word-of-the-year was “omnishambles” — no doubt a better word. (I mean, crikey, we can’t even all agree on how to pronounce “GIF” whereas “omnishambles” just begs to be uttered aloud again and again.)

“Actually, the GIF is dying,” responded The Atlantic’s Zachary Seward, who notes that the percentage of images on the Web that are GIFs has never been lower than it is today. (JPEG is the Web’s most popular format... for now.) “Of course, GIF is the only format that supports animation,” Seward observes. “So as long as there’s demand for high-fiving cats, the GIF will never quite die…”

And the GIF surely did not die this year, not when the U.S. elections provided so much fodder. Indeed, another recent article in The Atlantic argued that the animated GIF “took over the 2012 Election.” And American Public Media’s Marketplace deemed the Internet meme the “Election 2012 winner.”

Perhaps it was the combined role that the real-time Web, social media, and our collective Web attention played in this year’s election that made memes so ubiquitous. It was easy to watch some of the live events in particular — the debates, the conventions — and recognize when someone had uttered something eminently meme-worthy. Clint Eastwood and his empty chair. Joe Biden’s laugh. Almost instantly it seemed, the Internet responded, creating fake Twitter accounts and hashtags (@laughingjoebiden, #eastwooding) and, of course, creating images (animated GIFs or otherwise).

I don’t claim to make an argument here that Internet memes undermined Mitt Romney's campaign or that these will be some sort of necessary and fruitful strategy going forward. If nothing else, as is often the case with any viral hit online, these memes went away as quickly as they surfaced.

But in some cases, memes did prompt more discussion. And in many cases, they did reflect larger issues and trends. Romney’s remarks about “binders full of women,” for example, would not have touched the same nerve (funny bone, what have you) had there not already been concerns about the Republican Party’s plans to “trap” women.

Where Were the Education Memes?

So it’s interesting, I think, that with all the memes that the elections generated, that there was nothing much said about education. Nothing too funny. Nothing too viral.

There was, of course, Mitt Romney’s statement to PBS’s Jim Lehrer during the first Presidential debate: “I’m sorry Jim, I’m going to stop the subsidy to PBS. I like PBS, I actually love Big Bird. I like you too, but I’m not going to keep on spending money on things to borrow money from China to pay for.” And from there, Big Bird became a brief, but notable campaign issue and spawned an Internet meme.

PBS responded to the attack by framing this as an (early) education issue: “For more than 40 years, Big Bird has embodied the public broadcasting mission – harnessing the power of media for the good of every citizen, regardless of where they live or their ability to pay. Our system serves as a universally accessible resource for education, history, science, arts and civil discourse.” But that was PBS's response and that’s as close as we came to an edu-oriented Election 2012 Internet meme. 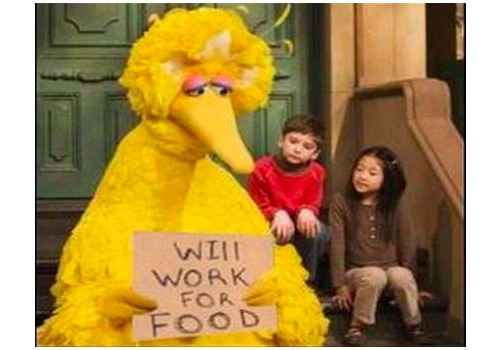 Of course, as Steve Hargadon and I have discussed repeatedly on our weekly podcast, there wasn't much in the Presidential campaign that really got to the heart of educational issues. That could be, no doubt, that both political parties have very similar platforms: more standardized testing, more charter schools. As such there wasn't a lot for the two Presidential candidates debate, and in turn, there wasn't much fodder for animated GIF-fing.

The lack of Internet memes regarding education reflects this. And perhaps the lack of memes reflects too the fact that — despite the best efforts of the Department of Education and Common Core State Standards and PISA scores and what have you — education remains a local, if not personal issue. How does something personal and local translate to the global stage of meme-ishness?

Or perhaps, to link this back to Alec Couros’s call for more student and school participation in remix culture, those who might have the sharpest insights and critiques of the system, those that can make the most painfully relevant jokes -- the jokes that really can spread beyond the local -- aren’t really playing in the playground of animated GIFs. Perhaps they're barred from doing so. Perhaps we just don't think creatively enough of how this "new culture of learning" can "go viral."