Apologies for being late with this weekly roundup of education news. I was traveling and in meetings on Friday. Friday, the day a young man walked into Sandy Hook Elementary School in Connecticut and killed six adults and 20 children. This is now the second week in a row in which my write-up of the week’s education news includes murders at a school. Last week’s occured in my hometown. If it hadn’t, I’m not sure I would have included it. I’ve been thinking a lot about that — about “what counts” as news here and what doesn’t. After all, students experience a lot of violence — at schools both K–12 and university — and it doesn’t always make headlines. What do we say, what do we write about for any of this?!

The killings at Sandy Hook Elementary (and the responses to them by mainstream, alt, and social media) have also colored what I’ve thought about education — the space, the people, the politics — for the last few days. As such, writing my Hack Education Weekly News has seemed quite ridiculous as one of the biggest events of the week had been, up ’til Friday, the furor over the University of California logo. Nonetheless, here’s a list of (some of) what happened from December 7 to 14, 2012. 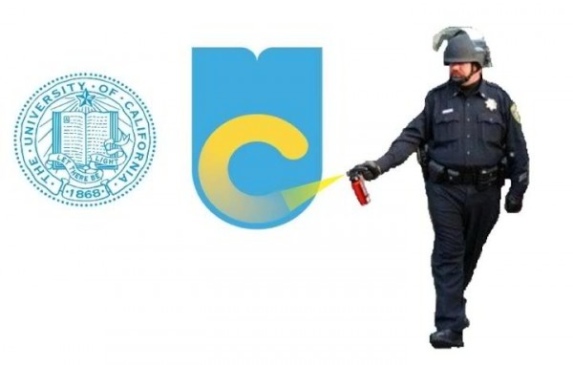 The University of California introduced a new “modern” logo this week, ditching the whole “let there be light” script for a spray-painted-looking yellow C in a blue shield. OMGWTF was the overwhelming response, and late in the week, UC withdrew the logo.

The FTC issued a report this week blasting children’s app makers for weak privacy protections. “Our study shows that kids’ apps siphon an alarming amount of information from mobile devices without disclosing this fact to parents," said FTC Chairman Jon Leibowitz. Nearly 60% of the apps the FTC surveyed transmit information from a user’s device back to the developer — or more commonly, to an advertising network, analytics company, or other third party.

The Michigan legislature passed a bill on Wednesday that would allow gun owners to carry guns and concealed weapons into locations that were formerly “gun-free zones” — including schools.

Michigan Governor Rick Snyder signed a landmark anti-union bill this week, making the state the 24th in the country to become “Right to Work.”

Demonstrating that the anti-teacher union sentiment is hardly something restricted to just the U.S., the British Education Secretary Michael Gove “has written to all state school heads in England, urging them to take ‘robust’ action against teachers involved in industrial action, and dock their pay,” reports The Guardian, “in a move described by Labour as putting the government on a ‘war footing’ with the teaching profession.”

The U.S. Education Department announced the winners of its Race to the Top-District competition. “These districts will share nearly $400 million to support locally developed plans to personalize and deepen student learning, directly improve student achievement and educator effectiveness, close achievement gaps, and prepare every student to succeed in college and their careers.” (It’s interesting that the charter school network KIPP — one of the winners — counts as a district, I think.)

Straighterline has launched “Professor Direct” — something that Fast Company’s Anya Kamenetz describes as an “eBay for professors” — which will allow individual professors to offer their own online courses, set their own tuition, and offer (ACE) credit.

MIT’s CSAIL department announced the development of a new online learning tool, Caesar, that provides crowdsourced feedback to students on their homework.

Google has teamed up with DonorsChoose to offer $99 Chromebooks for the holidays. Teachers must still go through the DonorsChoose application process in order to request these for their classrooms (and then they must in turn raise the funds for them). And hurry: applications close December 21.

In other Chromebooks news, the American Institutes for Research (AIR) says it’s working with Google to make sure that the Chromebooks are ready for online standardized testing.

BoingBoing highlights Esplora, a new Arduino controller “— The Arduino Esplora is a ready-to-use, easy-to-hold controller that ”lets you explore the infinite possibilities you have in the world of Arduino, without having to deal with breadboards or soldering. Shaped like a game controller, it’s designed to be used out of the box without extra parts since it comes with many sensors and actuators already on it.”

Khan Academy intern Jamie Alexander has launched “Khan Academy Lite,” an effort to bring the site to places that do not have Internet access.

More international test score data — the TIMSS (the Trends in International Math and Science Study) and PIRLS (Progress in International Reading Literacy Study) — were released this week, providing lots of fuel for the ol’ “American education is broken” narratives. The U.S. scores are “unacceptable if our schools are to live up to the American promise of giving all children a world-class education,” said Arne Duncan. But University of Oregon education professor Yong Zhao has the best response to this handwringing and notes wryly “The fact the U.S. as a nation is still standing despite of its abysmal standing on international academic tests for over half a century begs two questions: Is education as important to a nation’s national security and economy as important as believed? If it is, are the numbers telling the truth about the quality of education in the U.S. and other nations?”

Some interesting research from Andrés Monroy-Hernández who asks “Is working in groups better for functional works like code than for creative works like art?” He examines the community around the learn-to-code tool Scratch and found that “remixes are, on average, rated as being of lower quality than works of single authorship.”

The Joan Ganz Cooney Center at Sesame Workshop has released a report titled “Pioneering Literacy in the Digital Wild West: Empowering Parents and Educators” (PDF) that examines the current market for digital apps as well as how they are being used — in schools, by learners, by parents. As Justin Reich describes the findings in a blog post on Education Week: “breaking: most apps bad.”

In light of discussions around the importance (or not) of teacher education, Bruce Baker examines some of the data about who’s attending ed schools, which ed schools, and how that’s changed over the last decade. From 1990 to 1993, for example, the top 3 MA degree producers were Lesley College, National-Louis University, and Eastern Michigan University. From 2009 to 2012, the top 3 were University of Phoenix, Walden University, and Grand Canyon University.

"You’ll often hear the argument that half or almost half of all beginning U.S. public school teachers leave the profession within five years,” writes Matt Di Carlo on the Shanker Blog as he examines the veracity of the claim and the ways in which these statistics are gathered. (“It’s fair to say that the ‘almost half of new teachers leave within five years’ statistic has some backing, he concludes.)

In somewhat related news, TFA founder Wendy Kopp boasted this week in a Huffington Post interview that “on average, our corps members stay in the classroom for eight years.” The claim raised a lot of eyebrows as it conflicts with other data about Teach for America members which finds that fewer than 15% stay past their third year. In his Education Week blog, Anthony Cody tries to find the source of Kopp’s claim, and Kopp later clarified that “We can’t definitively say what avg is b/c some folks leave & come back, and we won’t know the total for those still at it until they retire.”

Barbara Ericson has examined the data from this year’s AP CS exam, finding (among other things), that this was the biggest year for the test. 24,782 people took the AP CS A exam this year, a 14.7% increase from 2011.

Google has announced that the applications are open for its 2013 Google CS4HS (Computer Science for High School) grant program. The program funds universities, community colleges, and technical schools to help them work with local high schools in order to bring CS and computational thinking into the classroom.

NPR reports on the school districts in California that have borrowed billions of dollars and postponed their repayments, meaning they owe far much more than they ever borrowed. Take San Diego’s Poway Unified School District, for example, which borrowed a little more than $100 million — its debt will cost over $1 billion to repay.

According to Technapex, the test prep company Testive has raised $500,000 in seed funding.

The University of California, Berkeley announced a $1 million scholarship program for undocumented students. (Because these students are in the country illegally, they do not qualify for federal financial aid.)

Former Indiana state superintendent and darling of the ed-reform movement Tony Bennett, voted out of office last month, has been hired as Florida’s new education commissioner. (The position in Florida is a political appointment, not subject to the vote of the people.)

“All I want for Christmas,” writes Scott Leslie, “is for you to buy a single Flatworld Knowledge textbook, before December 31. And then share it with the rest of the world.” Last month, the textbook publisher announced that it would be removing free access to its openly licensed textbooks. “But because of the technical restrictions FWK placed on the books (they are not at public URLs but behind logins; the content is not easily copyable unless you pay for it) after the gate comes down on December 31 and the licenses removed (because surely they will) unless copies of them are made outside of these walls, they will have effectively been removed from the Commons.” He’s created a wiki to list the texts that have been “liberated.”