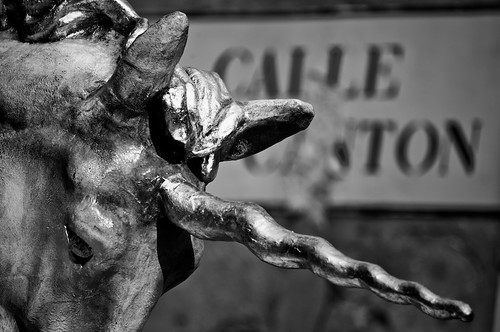 A district office of the National Labor Relations Board has ruled in favor of student athletes at Northwestern University in their bid to form a union. While the university will appeal, this is still a huge decision that could have sweeping implications for college sports and the people and institutions who profit off the free labor of these young adults.

Members of England’s National Union of Teachers went on strike this week to protest the government’s “accountability regime.”

DC-based adjunct instructors are seeking to craft a common labor agreement that would cover all unionized adjuncts in the city.

Students at the University of Southern Maine occupied the hall outside the provost’s office, protesting faculty layoffs at the school. More via Inside Higher Ed.

The Vergara v California trial wrapped up this week. Plaintiffs seek to end teacher seniority and tenure rules in the state.

A select group of teachers in Charlotte-Mecklenburg Schools will be eligible for $500 a year raises and four-year contracts, in exchange for giving up their tenure. Um. Sounds like a great deal.

After closing a record number of schools and after district-wide budget cuts last year, “Chicago Public Schools is seeking to double its furniture budget to $9.5 million, chalking up $5 million of that to an upcoming move of its central headquarters.”

The Chicago Board of Education has privatized its custodial services. Now it’s looking to hire outside companies to run school recess.

The Politics of Education Standards

Indiana has become the first state to ditch the Common Core.

Amazon has struck a deal with the Brazilian government to deliver 200 textbook titles to teachers and students in the country.

The Chronicle of Higher Education examines the Open Syllabus Project, an initiative “to build a large-scale online database of syllabi ‘as a platform for the development of new research, teaching, and administrative tools.’”

A student from Minnewaska School District in Minnesota has settled a lawsuit with her school over claims that officials has violated her constitutional rights by viewing her Facebook and email without her permission.

The FTC and the California attorney general have filed briefs in an appeals court case over Facebook’s use of teens’ data in advertising, arguing the judge who approved a settlement in the case had done so in error.

Coursera announced this week that it’s hired former Yale University president Rick Levin as its new CEO. (Last year, the company appointed one of its VCs, Lila Ibrahim, as President. She’ll now be the Chief Business Officer.) Coursera hailed Levin’s “visionary foray into online education, first in partnership with Stanford and Oxford, and later with Open Yale Courses,” but didn’t really go into detail about how that former effort – AllLearn – was a huge failure. But hey. We don’t talk about ed-tech history. It’s all disruption and unicorns these days.

edX has hired Wendy Cebula as its new president and COO. Cebula is a former Vistaprint exec. Looking at both the Coursera and edX appointments, Phil Hill asks “what about online experience?” I would add “what about a business model?” But then again, unicorns.

The University of Chicago has joined edX.

The European Commission is launching “a network of providers of MOOCs related to web and apps skills.” Google posted to its research blog a post titled “Making Sense of MOOC Data,” drawing on the data from the MOOCs that the company has run in order to give us remarkable insights like “our research indicates that learners who complete activities are more likely to complete the course than peers who completed no activities.”

“Grad school is a debt machine.”

The for-profit university startup Minerva has accepted its first cohort, bragging that having admitted just 45 students out of 1794 applications that it’s the “most selective undergraduate program in US history.” Even more selective than GWU!

The Southern Association of Colleges and Schools Commission on Colleges is investigating Alamo Colleges’ move to make the book The 7 Habits of Highly Effective People part of its core curriculum and a substitute for a required humanities course.

University of California President Janet Napolitano is skeptical of online courses, particularly for remediation. Speaking at a luncheon in Sacramento, she said that online education is “harder than it looks and if you do it right, it doesn’t save all that much money.”

Brendan Eich, the creator of JavaScript, has been appointed the CEO of Mozilla. The move has many in the company and Mozilla community upset, as it calls into question Mozilla’s values of openness. (Eich was a financial supporter of Prop 8, an anti- gay marriage initiative in California.)

Although he’ll remain with Microsoft Research, Jon Udell says he’ll be working on a new project – moving on from his community calendar syndication project to work instead on efforts surrounding the peer-to-peer web.

Charles Severance (aka Dr. Chuck) has joined Longsight as a “Sakai Strategist.”

Online education platform 2U has set its initial stock price at $13 per share. With its public offering today, 2U will raise about $120 million – and hopefully perform better than Chegg’s disappointing IPO late last year and Candy Crush maker King’s earlier this week.

Facebook has acquired the virtual reality hardware company Oculus VR for $2 billion. Among the potential uses for VR, says Mark Zuckerberg, “studying in a classroom of students and teachers all over the world … – just by putting on goggles in your home.” Add this to the company’s recent partnership with edX and you have virtual worlds plus MOOCs – pretty much the Horizon Report ed-tech fantasy. Whee.

HourlyNerd, a company that lets you rent “business gurus” by the hour, has raised $4 million, according to the Wall Street Journal, which says the company targets “McKinsey Moms.” I don’t even know what that means, but Highland Capital Partners and Greylock Partners apparently figured it was a nifty enough idea to throw in the cash.

For a little trip down memory lane, Phil Hill offers a look back at the Blackboard acquisition of Moodlerooms and Netspot which happened two years ago this week.

“Education technology startups raised over half a billion dollars in Q1,” trumpets Techcrunch.

In an examination of school vouchers, Politico reports that “Taxpayers in 14 states will bankroll nearly $1 billion this year in tuition for private schools, including hundreds of religious schools that teach Earth is less than 10,000 years old, Adam and Eve strolled the garden with dinosaurs, and much of modern biology, geology and cosmology is a web of lies.”

Knewton wants to “reboot learning styles,” which are so key to their grandiose marketing claims. Questioning the research of psychology professors like Daniel Willingham that has found no evidence of learning styles, CEO Jose Ferreira says that “To me, it’s pretty obvious that different learning styles exist.” So it’s settled then.

Among the trends I’m seeing in ed-tech these days: lots of pseudoscience bullshittery, particularly when it comes to claims about cognitive and neuroscience. Quartz takes a look this week at “the scant science behind anything that claims to boost your brainpower.” But companies like Luminosity and Knewton have raised hundreds of millions of dollars. So they have to be good. Right?