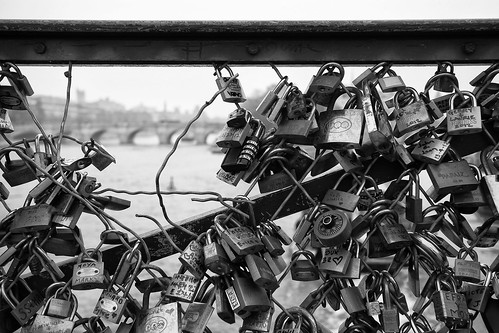 Oh hey, look. The Internet is broken! Or at least, the security of sites using OpenSSL has been broken – for several years in fact. The bug, which the NSA has (shocker!) purportedly exploited, means that encrypted transmissions – the ones you thought were encrypted? – are vulnerable. The comic xkcd has the best explanation. While the common advice is OMG CHANGE YOUR PASSWORDS, it’s best to wait to make sure the sites have actually fixed their own vulnerabilities before doing so (Check here, for example.)

RIP Windows XP. Microsoft has finally ended support for the most popular operating system ever, after years and years and years of those in the tech sector chanting “Die, IE6, die.” (But it’s not dead yet. About 28% of computers still use XP. About 4.4% access the Web via IE6.)

Yahoo recently broke the CC-attribution in Flickr. Never fear. Folks are on it.

Just when you thought the LMS couldn’t be any more of a horrible thing to do to students: according to Campus Technology, “KeyLemon, a company that makes biometric identification tools, and SwissTeach have partnered to demo facial recognition on the latter’s online learning management system (LMS), Global Teach.”

I’m happy that I escaped academia without much of a Rate My Professors record. I’m even happier now that there’s Draw Your Professor. (And I didn’t look up the faculty at the UofO at all. I swear. Ish.)

Inside Higher Ed looks at a report on some of the technical problems faced by the Common Application, a site that over 500 colleges use to handle the application process.

Weld North, a private equity firm run by former Kaplan head Jonathan Grayer, has acquired two digital learning companies: Imagine Learning and Truenorthlogic. With these acquisitions, reports The New York Times, Grayer “will take a big step toward expanding his latest venture into a learning hub for the digital age.”

Pluralsight has acquired Digital Tutors for $45 million. Because “online training” is what investors like about the future of ed-tech. Let’s all keep that in mind.

Quad Learning has raised $10 million in a Series B round of financing from MentorTech Ventures, SWaN & Legend Venture Partners, New Enterprise Associates and CNF Investments, says the Washington Business Journal. This brings to $21 million the total raised by the startup “with the goal of creating new pathways for individuals to earn their bachelor’s degree.”

In case you thought that not every single terrible idea could raise funding, look: Booktrack, a startup that adds soundtracks to e-books, has raised $3 million and has launched a classroom version. Booktrack has now raised $5 million in funding from Valar Ventures, Sparkbox Ventures, New Zealand Ventures, and other people who clearly must hate literature

The Flatiron School has raised $5 million in funding from Charles Rivers Ventures and Matrix Partners. The school, which offers class in NYC, offers tech training and does a pretty good job of recruiting women.

Quora, the Q&A site founded by Facebook’s first CTO Adam D’Angelo has raised $80 million in funding from Tiger Globa, Benchmark, Matrix, Northbridge and Peter Thiel. This brings to $141 million the total raised by this free website.

“UK-based Learning Technologies Group plc (LTG), parent company of Epic, announced the acquisition of LINE Communications for £9 million. £5.1m will be paid in cash and £3.9m in new LTG shares.” (I get this and almost all my funding news from Edukwest, for what it’s worth. Definitely a recommended read.)

According to investment research site CB Insights, global ed-tech investment has hit a record high this year: $559 million across 103 deals in the Q1 of 2014. Over half of the investment activity over the past two years has been in non-US companies.

Investment bankers Berkery Noyes has issued its latest report on acquisitions in the education industry. “There is currently an opportunity for acquirers to take advantage of the digital adoption in education and the potential to create new pathways for instruction and credentialing.” (Where “acquirers” is code of “Pearson” and “disruptive innovation” is code for “utter bullshit.”)

“Food insecurity” is on the rise among college students, with over 121 campuses adding food pantries this year alone.

More students than every before are being turned away by elite colleges as admissions are the toughest they ever have been. But, ya know, it helps their rankings so wheeee.

Community colleges rely on adjunct instructors to teach 58% of their courses.

The Kansas state legislature has voted to end due process for teachers.

The Department of Labor has been investigating unpaid internships – and then pretty much letting companies off the hook.

Florida Senator Marco Rubio wants to make it easier for private companies to profit off the student loan brouhaha. His plan: let them have a piece of your future salary in exchange for funding your college education. Indentured servitude 2.0.

Wireless wiretapping proponent (among other things) Condoleeza Rice has joined the Board of Directors of Dropbox.

Looking to put your college degree to work? Grade standardized tests for Pearson and others.

A terrible loss for the Wikipedia and education communities this week as news broke that Adrianne Wadewitz had died in a rock climbing accident. An avid contributor to Wikipedia, Wadewitz was one of the organiation’s first “Campus Ambassadors,” helping encourage professors to have their students improve Wikipedia entries as part of their coursework.

The Civil Rights Act turns 50 this year, and Pew Research released some survey data this week about the ways in which Whites, Blacks, and Latinos think about race in this country. Of note: what we think about “fair treatment” of Blacks in schools. 85% of White Americans say that Blacks are treated fairly in public schools. Just 49% of Blacks do.

Remember how folks have been clamoring for Nate Silver to turn his analytical attention towards education? Well here we go: an article that looks at various polls and contends that Jeb Bush’s education politics “may not be that controversial.”

The CDC reports that sex education doesn’t come before kids start having sex.

Gallup released its lated polling data on the “State of American Schools.” Anya Kamenetz has a good write-up of the results, with this worth noting: "K–12 teachers scored dead last among 12 occupational groups in agreeing with the statement that their opinions count at work, and also dead last on “’My supervisor creates an open and trusting environment.’”

You can read the latest findings from the Project Tomorrow survey of students, teachers, parents, administrators about K–12 digitalia.

In news that makes Nick Carr happy I’m sure, “Students Reading E-Books Are Losing Out, Study Suggests,” reports The New York Times. I mean, I think that’s what Nick Carr argued at least. I read his books on my Kindle so maybe I forget…

Northwestern University is appealing the recent National Labor Relations Board decision that would allow its football team to unionize. No surprise.

But congrats to UConn whose men and women’s basketball teams won whatever the heck that big basketball competition is. I care less about that than this comment by star player Shabazz Napier: “There are hungry nights that I go to bed and I am starving. So something can change, something should change.”