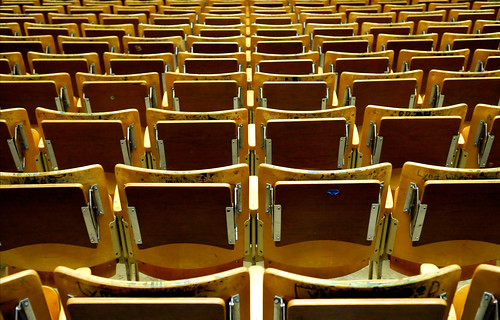 The FCC has committed $450 million in funding to improve public schools’ and libraries’ broadband under the E-Rate program. (PDF) But it's still moving forward with plans to end net neutrality. So don't get too excited about "high speed Internet" in schools, eh?

Today is the 60th anniversary of Brown v Board of Education. But racial segregation remains in US schools.

The European Union Court of Justice has ruled that Google must honor “the right to be forgotten” and remove links to incorrect and out-of-date information when individuals request it. (More on this over on Educating Modern Learners where it’s this week’s “What You Should Know This Week.”)

The Obama Administration has unveiled a new $75 million fund to “spur innovation in higher education.”

Senators Orrin Hatch (R-Utah) and Edward Markey (D-Massachusetts) are proposing an update to FERPA that will, among other things, “require schools to maintain and make available a list of all outside companies that have access to their students’ information.”

Ras Baraka has been elected the new mayor of Newark. Baraka, the son of poet and jazz musician Amiri Baraka, will replace Cory Booker, now a US Senator. Baraka ran on a campaign of taking Newark back from “political bosses, Wall Street investors, and Governor Chris Christie, whose agendas, he said, had not served the city’s struggling people.” (More on that agenda in Dale Russakoff’s story on Zuckerberg, Booker, and Christie’s plans for the Newark schools here.)

Although not directly related to ed-tech, this should give us concern: the Federal Circuit Court has reversed a lower court’s ruling in the Oracle v Google case, finding that the Java APIs are copyrightable. (The EFF responds.)

Astronaut Chris Hadfield has taken down the video of his wonderful cover of “Space Oddity” filmed on the International Space Station since he only had permission to use the song for a year.

And still more IP brokenness: Achieve3000 has been granted a patent for “its system and method of providing differentiated nonfiction content to students based on their Lexile®/reading levels.”

Goldieblox has settled its legal dispute with the Beastie Boys (it has used the band’s song “Girls” in an ad without permission, and although it probably fell under fair use, it was pretty icky considering Adam Yauch’s statement in his will that his music not be used in advertisements). The engineering toy company will contribute 1% of its revenue to a charity until it’s paid $1 million.

Coursera co-founder Andrew Ng is stepping away from his day-to-day responsibilities at the company (he remains Chairman of the Board) and joining the Chinese search giant Baidu.

PandoDaily’s Carmel Deamicis has published a recent interview with Udacity co-founder Sebastian Thrun: “A Q&A with ‘Godfather of MOOCs’ Sebastian Thrun after he disavowed his godchild.” And the religious reference in the headline isn’t even the weirdest thing. Thrun says, for example, “If you’re affluent, we can do a much better job with you, we can make magic happen.” And “It’s about advancing education, filling the skills gap, and reinventing education for the 20th century.”

“MOOCs: Expectations and Reality” (PDF): “To date, there has been little evidence collected that would allow an assessment of whether MOOCs do indeed provide a cost-effective mechanism for producing desirable educational outcomes at scale. It is not even clear that these are the goals of those institutions offering MOOCs.”

Another story about a student denied hot school lunch because of an outstanding balance on his account. “Not only was the 16-year-old humiliated in front of his peers by the very public incident, but his name was also posted, along with that of lots of other students with delinquent expenses, on a list in the cafeteria for everyone to see.” His mom stepped up and paid off the overdue balance for her son, as well as the balances for all the other students at the school in a similar situation.

Oops.“Emory University server accidentally sends reformat request to all Windows PCs, including itself.”

The decline in college enrollment is slowing.

The details continue to come out about the University of Oregon and the local police department’s response (or lack of response) to an alleged sexual assault of a student by several basketball team members. This line in the police report is horrific: “I thought, maybe this is just what happens in college,” she told police, “… just college fun.”

At Columbia University, lists of names of sexual assault perpetrators are showing up in women’s bathrooms. 23 students recently filed a federal complaint charging that the university had failed to respond properly to sexual assault cases.

The Kansas Board of Regents has finalized its new social media policy restricting what public employees, including university professors, can say, including anything “contrary to the best interests of the university.”

Robert Buckingham, a tenured professor and the Executive Director of the University of Saskatchewan School of Public Health, was fired this week for speaking out against the school administration’s plans to slash budgets and jobs. Five weeks from retirement, Buckingham was escorted from campus and “banned for life.” Facing huge outcry, the university has reconsidered its decision. He’s no longer the head of the school, but he gets to keep his tenured faculty position.

With its former CEO off to DC to be Under Secretary of Education, NewSchools Venture Fund had to hire a replacement. The new CEO: Gates Foundation exec Stacey Childress.

Google chairman Eric Schmidt has been appointed to a three-person commission to advise New York on the use of technology in schools. God, I’m so glad that there’s no insidery bullshit in ed-tech.

Phil Hill takes another look at hiring and growth at Desire2Learn.

The NCAA has released its latest report on athletes’ academic progress. “A total of 36 teams will be ineligible for postseason competition in 2014–15, up from 13 this year, and another 57 squads will face scholarship limitations or other penalties, up from 36.”

“The NSA has nothing on the ed tech startup known as Knewton,” writes Politico’s Stephanie Simon in an in-depth look at data mining in educational products. Her story has prompted Code.org to make a change to its privacy policy to clarify what sorts of data it requests from schools.

From Cory Doctorow: “As Adobe Creative Suite struggles with its license-server outage, stranding creative professionals around the world without a way of earning their living, a timely reminder: a cloud computer is a computer you’re only allowed to use if the phone company and a DRM-peddling giant like Adobe gives you permission, and they can withdraw that permission at any time.”

Ed-tech news site Edukwest has launched Edukwest Academy, which will offer online courses in an effort to “build the first ed-tech business school.”

Clever now offers single-sign on to make it easier for students to log into their edu software.

“Is The Udemy Marketplace Model Still Valuable To Instructors?”

LearnSprout, which has pivoted from the API business to the data visualization business, has raised $4.2 million in a Series A round of funding. (It brings to $4.7 million the total raised by the startup.)

Synergis Education has raised $5 million in funding from Tokyo-based firm Mitsui & Co. From the press release, “Synergis is a premium, full-service provider of educational services designed for college and university leaders who are not satisfied with the status quo.”

Web-based writing tool Quill has received a $200,000 grant from the Gates Foundation.

Funnymonkey’s Bill Fitzgerald has launched a crowdfunding campaign to support his research and writing “inBloom: Data, Politics, Money, Education, and the Crash.”

The Brown Center on Education Policy has released a study that calls into question the metrics used by New York to evaluate teachers. More from Chartbeat.

[The Class of 2014](A new survey of college grads shows a high level of optimism about job prospects.) is optimistic about its job prospects. Well, give ’em a month or two and the economy will rectify that, eh?

According to the Public Policy Institute of California, “Online course enrollment has increased dramatically at California’s community colleges. Students are less likely to successfully complete an online course than a traditional course. But many use online courses to achieve their long-term goals.”

The latest Pew Research study looks at “Young Adults, Student Debt and Economic Well-Being.” “About four-in-ten U.S. households (37%) headed by an adult younger than 40 currently have some student debt—the highest share on record, with the median outstanding student debt load standing at about $13,ooo.”

In this week’s round of meaningless edu rankings, Pearson’s Global Index of Cognitive Skills and Attainment has been released, ranking the US 14th.

The United States is ranked as the top higher education system in the world. But let’s disrupt the hell out of it anyway, amirite.