B. F. Skinner is often credited as the inventor of the “teaching machine.” While no doubt the phrase is often associated with his name and with his behaviorist theories, he was hardly the first person to design a machine for teaching. But identifying who was "the first" poses a challenge, in part because it depends on how “teaching machine” is defined. It depends on whose achievement is recognizable or recognized, on what “counts.”

In the 1960 book Teaching Machines and Programmed Learning: A Source Book, A. A. Lumsdaine argues that to count as teaching machines, devices must have the following properties:

"First, continuous active student response is required, providing explicit practice and testing of each step of what is to be learned.


Second, a basis is provided for informing the student with minimal delay whether each response he makes is correct, leading him directly or indirectly to correction of his errors.


Third, the student proceeds on an individual basis at his own rate — faster students romping through an instructional sequence very rapidly, slower students being tutored as slowly as necessary, with indefinite patience to meet their special needs."

In his “History of Teaching Machines” (1988), historian of psychology Ludy Benjamin writes that,

"A teaching machine is an automatic or self-controlling device that (a) presents a unit of information (B. F. Skinner would say that the information must be new), (b) provides some means for the learner to respond to the information, and (c) provides feedback about the correctness of the learner’s responses."

(Is this prescription or description?)

The shared features in most definitions of the teaching machine: automation, feedback, self-pacing.

As such some scholars have credited Ohio State University psychology professor Sidney Pressey, who displayed a "machine for intelligence testing" at the 1924 meeting of the American Psychological Association, as "the first" to build a teaching machine.

Pressey received a patent for the device in 1928. 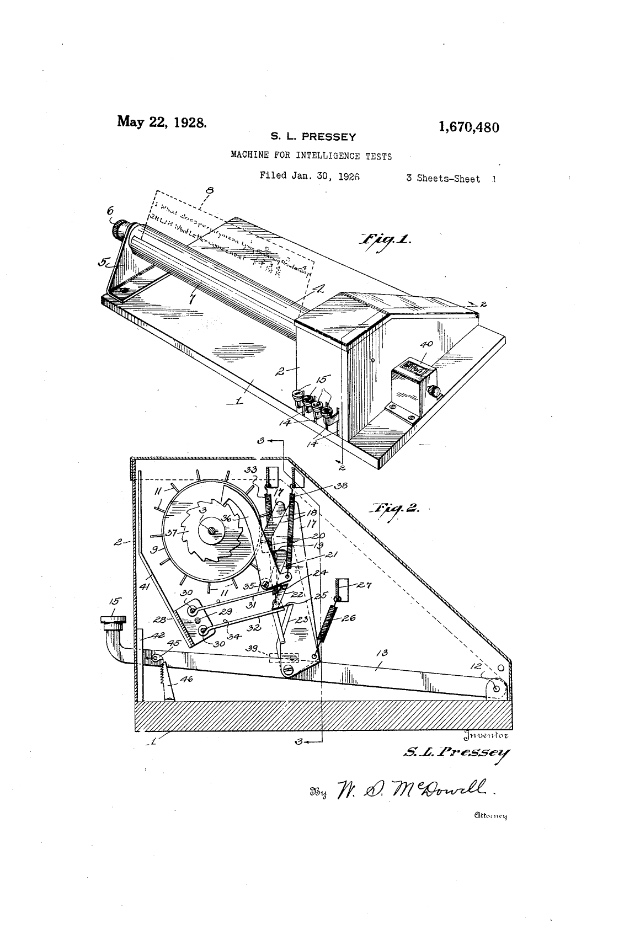 A later patent for a “machine for intelligence tests” was granted to Pressey in 1930. 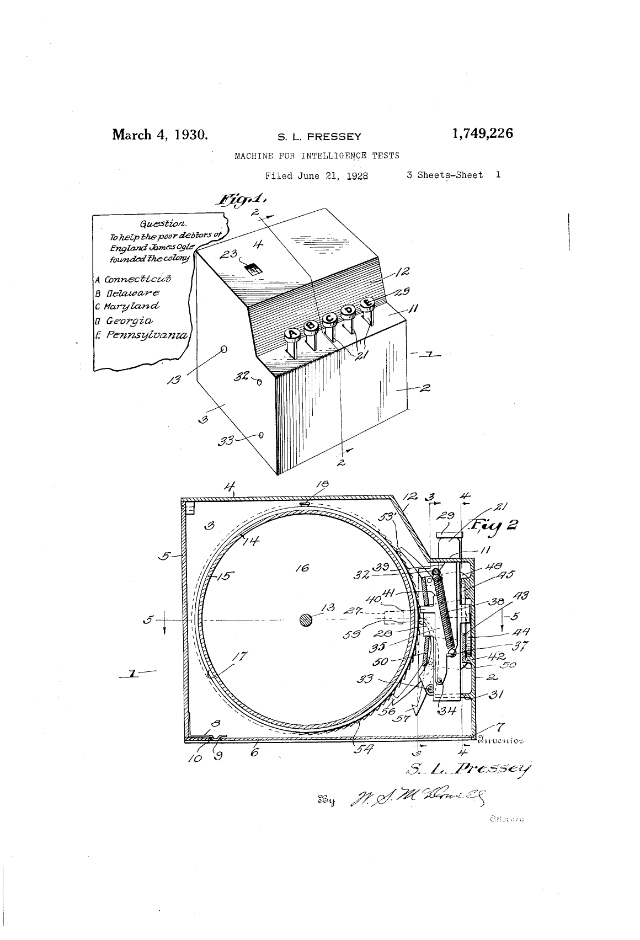 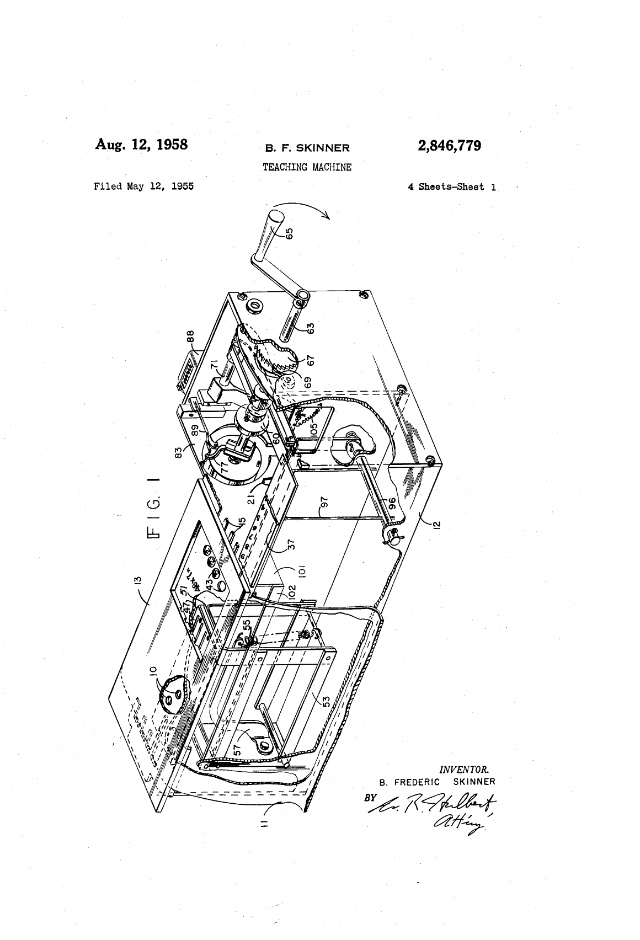 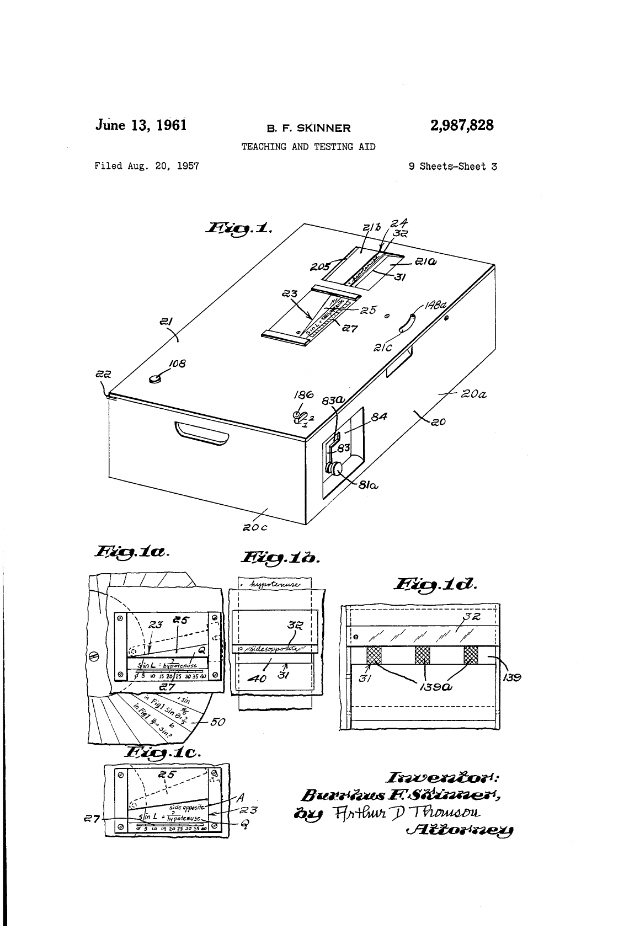 Patents purport to recognize “who was first” and are designed to protect the intellectual property of the inventor, so that that person in turn can exclude others from developing or selling the invention. The UN's World Intellectual Property Organization defines an invention eligible for patenting as “a solution to a specific problem in the field of technology. An invention may relate to a product or a process.” Education patents, in other words, offer technological “solutions” to the “problems” of teaching or learning; those problems are by definition technological.

Education patents tell us a lot about intellectual history, commercial interests, and legal machinations. They highlight our conceptions of teaching, learning, and technology – how those conceptions have changed and how they remain unchanged. They underscore the perceived connection between innovation and technology, revealing how a nascent academic discipline like education psychology was able in the early twentieth century to wield science, measurement, and machines in order to argue for its pertinence and power. 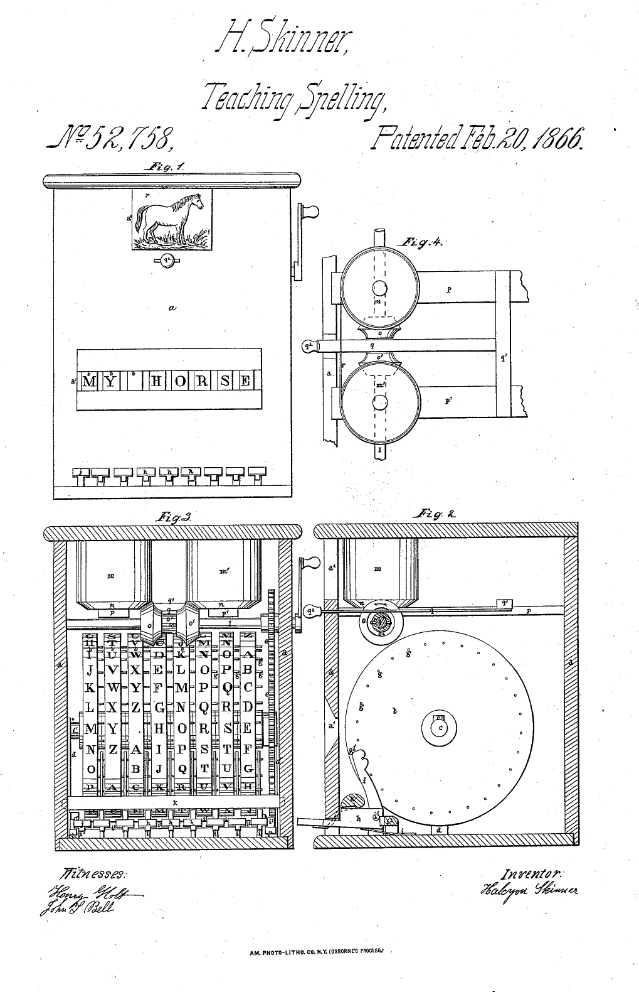 Ludy Benjamin describes the machine and compares it to his rubric for what constitutes a teaching machine:

“A pictorial scroll at the top of the apparatus was moved by a hand crank, successively exposing a series of pictures (e.g., the horse shown in the figure), thus providing the unit of information. The task of the student was to spell an appropriate word or words, for example ‘my horse.’ Words of up to eight letters in length could be spelled by pressing the keys on the front of the apparatus. Those keys provided the response requirement of the definition, and they moved the eight interior letter wheels, each of which contained the 26 alphabet characters and a blank space. However, the machine did not give any feedback about the correctness of the response. The subject could give any number of correct or incorrect spellings and would never know the accuracy of such responses. Thus, this 1866 device for teaching spelling was not a teaching machine.”

Writing in the Journal of Experimental Education in 1936, Ibert Mellan calculated that between 1870 and “the present time there are between 600 and 700 inventions issued on the subjects of teaching and education.” 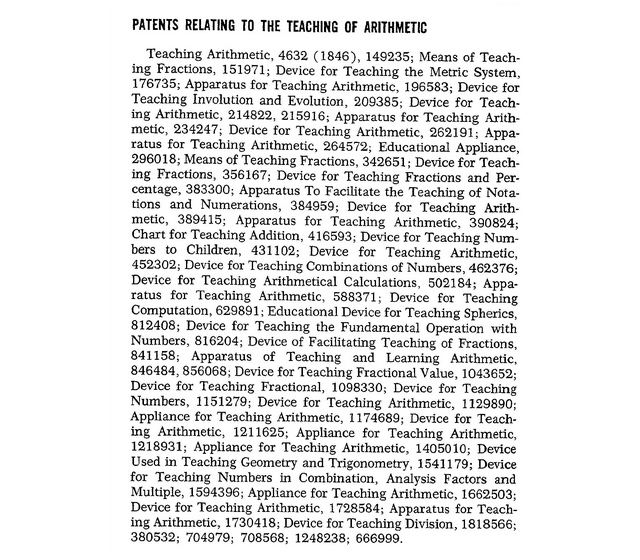 The vast majority of these were filed by inventors outside of the education field. In addition to his spelling apparatus, for example, Halcyon Skinner also filed for patents for a “motor truck for cars,” “tufted fabric,” a “needle loom,” a “tubular boiler,” and many other inventions.

Benjamin contends that the first patent from a psychologist was granted in 1913 to Herbert Aikins for an “educational appliance” for the “the teaching or testing of a pupils knowledge of arithmetic, reading, spelling, foreign languages, history, geography, literature or any other subject in which questions can be asked in such a way as to demand a definite form of words, or a definite arrangement or sequence of letters, figures, or other symbols by way of answer, all without the presence or aid of a teacher being necessary.” 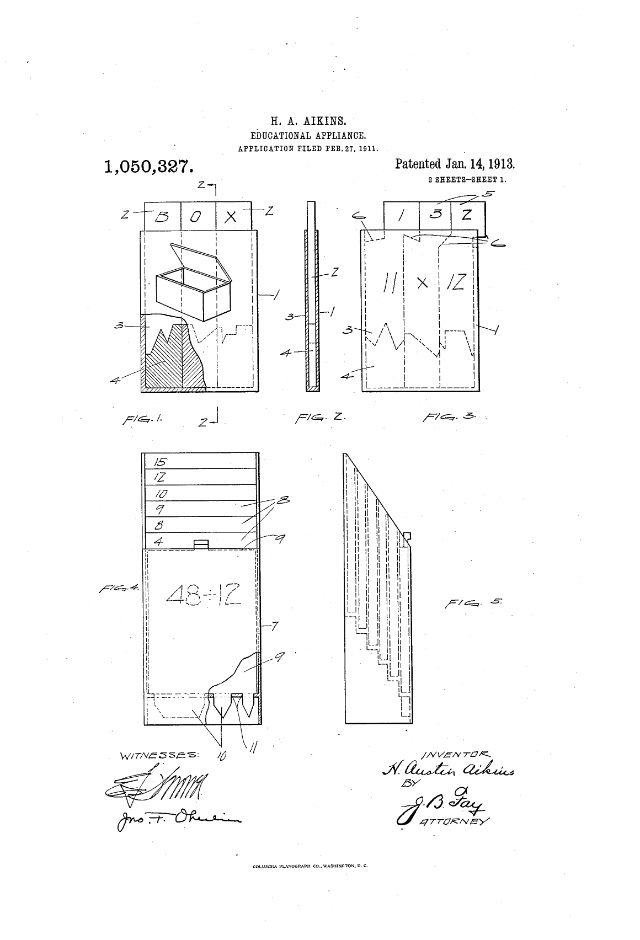 But like other early machines, Aikins’ device fails to meet the standards for Benjamin’s definition of “teaching machine.” (It was not automated.) The device is significant nonetheless, Benjamin argues, as it was built based on the research of Edward Thorndike, the “father of modern educational psychology” who pushed heavily for testing as a way to measure students’ progress.

Having a definitive answer – and a definitive answer, by extension, of what was “the first” – is less helpful and less interesting, I'd argue, than looking at how disciplines like education psychology and industries like education technology have, from the early twentieth century onward, sought to prescribe what these devices should do and to stake their claims surrounding innovation and the specifications for measurement and machines.