Roaming Autodidacts and Entrepreneurial (L)Earners: The Stories We Tell about Lifelong Learning

The survey on “Lifelong Learning and Technology” released earlier this week by the Pew Research Center provides an important counter to the sweeping pronouncements we often hear about Internet technologies and the coming democratization and de-institutionalization of education. While 73% of adults surveyed did say they consider themselves to be “lifelong learners,” there are significant class-, race-, and educational attainment-based differences in what that learning “looks like” in terms of place (namely, on- or offline) and content and expectations of what that learning will “do.”

Both of the aforementioned elements – what we think learning “looks like” and what we expect learning to “do” – clearly shape how education technologies are designed as well as how they’re promoted. But too often we imagine the “everyone” who will take advantage of the learning opportunities that technology may (or may not) afford not only as “roaming autodidacts,” as Tressie McMillan Cottom has called these idealized students, but also as untethered, entrepreneurial earners – that is, workers who can easily and upwardly navigate the labor market without any risks or restrictions.

In general, Americans do believe that lifelong learning is important, so it’s not that surprising that hyperbolic narratives about the future of learning are appealing to us. According to Pew, Americans describe themselves as inquisitive, as “information seekers,” and they believe that others should behave similarly. 87% of adults surveyed believe that people should learn new things related to their jobs and 69% say that people should stay abreast of scientific, technological, and cultural developments.

But only 63% of working adults (that’s 36% of all adults) surveyed said they’d participated in “job-related training” within the past year. And those who described their employment status as a “job” as opposed to a “career” were far less likely to participate in professional learning opportunities – just 44% of the former did some job-related learning, while 71% of the latter did so. 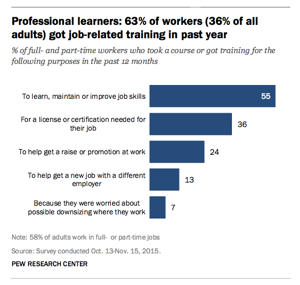 It's always worth thinking about "why" this might be the case beyond the culturally-accepted belief that "learning is good."

Pew also found that the majority of that professional learning occurred offline – at the workplace, at work-related conferences, or at dedicated offsite training facilities. "You can learn anything on the Internet," tech evangelists say. But you can't. And most folks don't. Only one-third of those “professional learners” – Pew’s study distinguishes these from “personal learners” – say that most of their learning takes place online.

I can’t help but note here that the tech/business publication Quartz covered the Pew survey on Tuesday with the headline “The Americans who’d benefit the most from online education have no idea it exists” and then on Thursday covered a report on professional development from the startup Degreed with the headline “Companies are so bad at helping workers develop their careers, most are training themselves.” The data from Pew and from Degreed contradict one another, and while the same author wrote both stories for Quartz, there’s seemingly no recognition of this. The narrative of the “roaming autodidact” and “entrepreneurial learner-as-earner” is so powerful, I guess, that a journalist might forget that it’s worth asking questions about who really benefits from this storytelling.

The Pew survey found that that familiarity with digital badges (certifications for skill mastery) was roughly the same; and while I don’t deny that Khan Academy and MOOCs have seen a lot more media coverage than badges, I don’t want to suggest here that the lack of familiarity or uptake with any of these is just a reflection of how much the media has or hasn’t covered them. It’s more likely that the storytelling about ed-tech does not match most people’s reality. 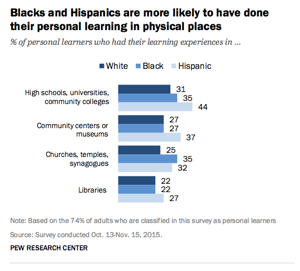 Do jobs (and which jobs) reward their employees for professional learning? What sorts of learning is actually rewarded? (That is, it is informal learning? Or are formal certifications really the signals that “count”?) Do adults (and which adults) have the resources necessary to pursue learning opportunities? These resources include things like time, money, broadband access, and technology tools, and because of the importance of offline learning, things like transportation. Also key: the language in which these are offered. As Pew writes,

One of the themes that I come back to again and again in my work is that education technology exacerbates existing inequalities. “Those who are better off and better educated get more benefits from learning,” the authors of the Pew observe. Addressing these sorts of structural inequalities demands we do more than suggest that “lifelong learning” will be an economic or intellectual panacea. And when education technology and "future of work" proponents say that it's increasingly up to the worker to become more "entrepreneurial," to become a lifelong learner, we should interrogate exactly who that imagined worker might be.