Pew Research on US Broadband Adoption

The Pew Research Center released its "Home Broadband 2010" report today, detailing the adoption of and attitudes towards broadband in the US. 66% of American adults now have a high-speed Internet connection at home, up only slightly from 63% last year.

What's striking about the report, I think, are the attitudes of those Americans who do not currently have broadband access.

21% of American adults do not use the Internet, and while we talk a lot about "access," the Pew study contends that many non-users don't think the Internet is relevant and don't think they could use a computer and get online on their own. It's not that people can't afford to be online; 31% of those who don't have broadband access simply aren't interested. Only 1 in 10 respondents indicated that they'd like to start using the Internet in the future.

The report finds strong growth in African-American households' adoption of Broadband -- a 22% increase over last year's numbers. And African-American and Hispanic households were more likely to see lack of broadband access as a major disadvantage. 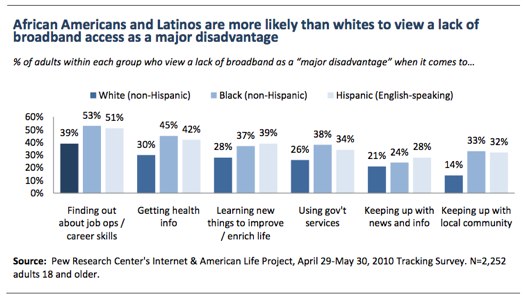 When asked whether expanding high speed access to everyone in the country should be a priority of the federal government, only 11% of Americans say that it should be a top priority and 30% feel that it is important, but a lower priority. 26% say that the government should not promote broadband expansion. Unlike Finland where Internet access was recently deemed a legal right, a fair number of Americans just don't give a damn.