New Data Dashboard from the Department of Education

I read an amusing story today in The Oregonian. Apparently the Oregon Capital News had done some calculations on the pay and benefits for the employees of the Portland Public Schools and wrote an eye-opening piece, exposing that William Griffin, a math and economics teacher at Lincoln Public High School was the third highest paid figure in the district. Griffin also happens to be the school's former football coach. And Lincoln Public High School happens to be one of those football powerhouse schools, thanks in no small parts to the efforts of Griffin.

Except not really. The data was bad. Apparently, there's another William Griffin in the district and the report inadvertently combined both these men's salaries, ending up with a $140K figure, rather than the $70K they take in.

The story is a good reminder about the problems with some datasets and databases. Just because it's data -- ya know, cold, hard facts and all that -- doesn't mean it's perfect. Data still needs to be captured, entered, labeled, and tagged properly.

That's a long introduction to what really wasn't meant to be a call to arms for better data, but rather a quick news story about the Department of Education's new United States Education Dashboard.

It's an effort, the department says, that highlights both our successes and challenges while providing a new level of transparency that is absolutely essential to our efforts to accelerate student achievement. The dashboard tracks 16 indicators, from the number of 3 and 4 year olds enrolled in preschool, to the number of 8th graders proficient in the NAEP in mathematics, to the number of Bachelor's degrees awarded in science, technology, engineering, and mathematics. 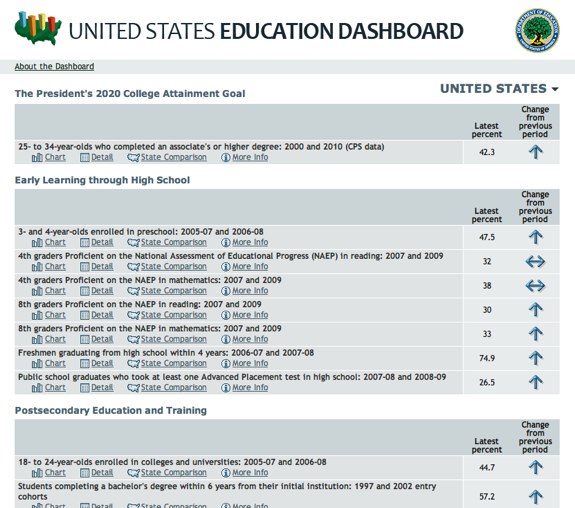 You can display charts and maps and details about the data, but you can't download anything -- from this site at least -- to build your own visualizations. Nonetheless, it's an interesting first stab at showcasing some important indicators. It's hardly an apolitical one, naturally, as part of what it tracks is which states use student achievement to assess teachers.

And that's really why I started with the football coach anecdote. It's good to be open and transparent about data. But we need to look at a lot of metrics -- and look at them carefully -- before we jump to any conclusions about what it means about a teacher's worth.