Team Text2Teach walked away last night the winner of the Seattle Startup Weekend EDU, having built over the course of the last 54 hours a new SMS service aimed at helping teachers keep at-risk students engaged. The startup enters a fairly crowded space -- I've covered some of the new companies working to build text-messaging apps for the classroom quite a bit recently -- but there were a couple of things that made Text2Teach stand out among the other 14 pitches at last night's finale:

Text2Teach was addressing a problem that exists in the K-12 classroom. And on its team was a teacher.

Over 125 people participated in this weekend's Startup Weekend, which is part of the new focus on the education vertical. And while there were business folks and developers and designers and marketers and college students aplenty, there weren't a lot of teachers present -- only 3 or 4.

That absence was evident in a lot of the projects that were built over the course of the weekend. (I've listed them all at the bottom of this post.) And as a big proponent of Startup Weekend as an educational event itself -- even when it's not focused specifically on the education sector -- I've been trying to brainstorm all weekend how we can get more educators involved in the process.

No doubt, a 54-hour event is a substantial time commitment -- it is for everyone, I should note, who give up their weekend to do this. And damn, I'm exhausted even though I didn't join a team or build a startup. I was just a mentor, along with over 20 others from the education technology community, from the Seattle entrepreneurial community, from investment firms, from the Education Department, from philanthropic organizations. Add to that list of luminaries, speakers like investers Vinod Khosla and Mitch Kapor and judges like Mike Arrington. (A big, big thank you to the folks from TeachStreet for pulling together such a kick-ass event.)

As always, I think all the participants learned a lot at these events. During the course of a Startup Weekend (education-focused and otherwise) you learn about lean startups; you learn about project management; you learn about working in teams (and teams with strangers a lot of times); you network with others interested in (ed-)tech entrepreneurship.

But without a strong presence from educators, it's a lot harder to identify problems let alone build solutions (particularly considering the time constraints). I fear that when we fail to pay attention to educators, we actually learn very little about the challenges they face. Instead, we just reiterate some of the tired old narratives that education is broken, teachers are Luddites, students are failing, schools are failing, and so on. I mean this writ large, of course, but I also fear these narratives -- with no one there to offer any alternative -- will really hamper the efforts of Startup Weekend EDUs.

I know personally how disheartening and daunting it can be to walk into a tech event and be one of just a handful of women present. I mean -- HOORAY! -- there's never a line for the girls' bathroom. But that's pretty much where my excitement ends. Add to that frustration now, the lack of a presence of educators at these sorts of hack events. As the slide below from Mitch Kapor's presentation demonstrates (that's him on the left), our students' technology usage looks different. We have to be prepared to meet the educational and technological needs of everyone. 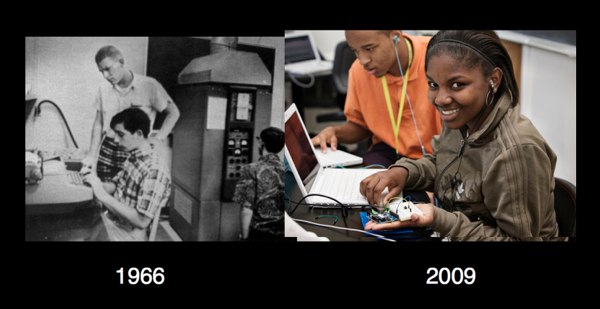 This was the second Startup Weekend EDU that I've attended and my fourth Startup Weekend in general. What's struck me each time is the gap between the pitches one hears on a Friday night and what's actually built come Sunday night. But when it comes to the education-focused events, I'm still always surprised to hear pitches for apps that already exist and for projects that have nothing to do with what educators and students want and need, with what the constraints of the classroom look like. This weekend, for example, we heard a proposal for a startup to crowdfund supplies for teachers. Wow, I thought, no one has heard about DonorsChoose.org. This isn't merely a failure in getting educators involved in the event; it's a failure on the part of folks like me -- tech and education journalists -- to get the word out about what applications and resources are available already.

That isn't to say that it's a bad thing to work on these sorts of ideas. There are lots of ways to improve on pre-existing products. But rather I think it's an indication that, despite my (and others') best efforts, ed-tech is still so very marginalized and relatively unknown.

Yet despite all these concerns, I'm a huge fan of the Startup Weekend process, and I really must say, this was one incredibly awesome weekend. Like I said, you learn so much by being there -- whether you're a hacker, a designer, a marketer, a teacher, a mentor. At the end of the 54-hour event, everyone walks away with a much better sense of how to become a startup founder, how to build a product and build a team, how to take an idea and build a business around it. That drive for entrepreneurship is really a powerful and empowering thing.

I'd also add that with the Startup Weekend EDUs, everyone walks away with a glimpse into the education sector and the knowledge that while yes, it is impossible to revolutionize education (over the course of the weekend for sure), it is possible to make a difference and to connect with other like-minded people who want to help hack the system.

I love it that Startup Weekend is committed to taking that knowledge and applying it to education. And as such, I'm interested in brainstorming ways to help support the project and to get more educators involved.

SeeQRs: a QR platform that can be used for educational tours

1001 Mentors: a site for matching mentors and mentees

SkillupLearning: an app for vocational learning for migrant workers in China

TextWorks: a project aimed at low-income students, where they'd earn discounts on textbooks based on their grades

Game2Code: a video game that teaches players to code