Updated 11/9: According to Microsoft's PR company, Teach.gov will now move to Teach.org

I'd like to think that folks would be up in arms if suddenly the government website War.gov fell under the control of Halliburton, or if Drill.gov was run by BP. Those are pretty drastic examples, I realize (and non-existent websites too, I confess). But I'm still shocked to see the news today that the Department of Education has handed over control of Teach.gov to Microsoft.

The DOE launched Teach.gov last fall as a way to help promote teaching and recruit new teachers to the profession. That recruitment piece is necessary as, unfortunately, some 10% of teachers leave after their first year on the job, some 30% of teachers quit within the first 3 years, some 50% within the first 5 years. While, sure, some of these people simply aren't cut out to be good teachers, many of those who abandon the profession early are good teachers or have the potential to be so. Recruiting more teachers has been an important (and necessary) part of the DOE's recent focus. 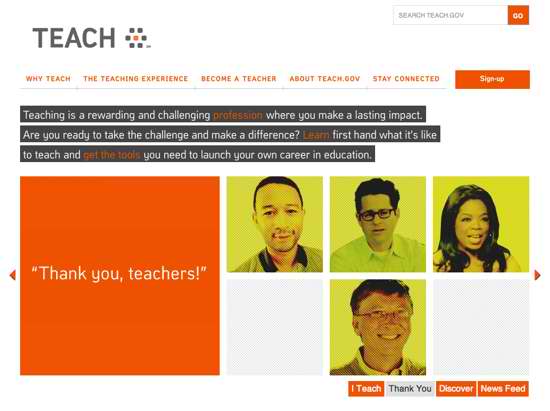 Teach.gov offered a number of "paths to teaching" to make it easier to find out information about teacher preparation programs, financial aid packages, loan forgiveness programs, certification and licensing requirements, and state and district-level job opportunities.

There's not a lot of detail about the decision by the DOE to hand over this campaign to Microsoft. The news is buried in a Microsoft press release. Microsoft, for its part, says that it will work to bring other corporate partners on to the campaign (because, yes, clearly that's what's necessary to recruit more teachers).

I wrote about the launch of Teach.gov back in September as another example of the federal government's adoption of the open source platform Drupal. Any guesses on how long it'll take to migrate to a Microsoft CMS?