Robot Graders and Other Ed-Tech Predictions for 2012 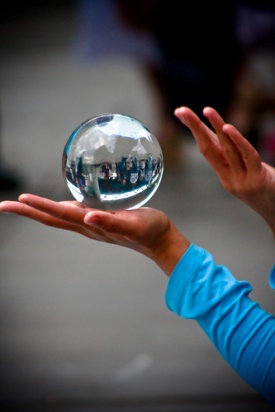 Last year I wrote a couple of prediction posts (here and here) that were awfully accurate, but only because they were terribly vague. I could do that again, I suppose, predicting that we'll see more technology integrated in the classroom, more government budget cuts, more private investment, more hand-wringing about student achievement.

There have already been a bunch of great education prediction posts this season (See: Dave Cormier, Chris Dawson, Larry Ferlazzo, for example), and this post feels late to the prediction party -- I mean, it's already January 2. So when none of the things I've write about below actually happen in 2012, I'll just blame other writers for nabbing all the good predictions first.

I've actually written 3 prediction posts, so I'm pretty sure got I've covered my bets. You can read my thoughts about the ed-tech trends to watch over on MindShift. For a more specific look at how universities and colleges will be affected by technology, I have posted my thoughts over on Inside Higher Ed. In both cases, those are rather like my 2011 predictions: broad generalizations.

But here on Hack Education, I'll be precise (and bold and probably very wrong). But what the hell...

1. 2 well-known American (and perhaps even Ivy League) colleges announce certification programs similar to MITx -- that is, some sort of recognition for non-enrolled learners who complete open online courses.

2. Related: All of these programs offer CS (read: AI) classes, as the race is on in 2012 to create the robot grader.

6. There's an update to each of the policies that governs students, children and privacy (CIPA, COPPA and FERPA). Alas, the language in neither the new FERPA nor CIPA really clarifies things, and while Congress passes a revised and more restrictive COPPA, it does nothing to address the tide of children (often with the support of their parents) who lie about their age online.

8. Microsoft makes a big marketing push over the spring and summer, trying to get schools on board with its soon-to-be released Windows Tablet. Alas, to no avail, as folks continue to wait for a great Android tablet (and wait… and wait…)

9. There will be no big "education" story out of Amazon this year-- neither textbooks nor tablets. (Amazon is the online equivalent of Walmart, and the company has no more interest in education than the brick-and-mortar retail giant. Oh, it'll sell you back-to-school supplies, sure.) Amazon will however continue to screw with public libraries.

10. Arne Duncan steps down. Karen Cator becomes the next Secretary of Education.