What to Look for in Apple's Education Announcement 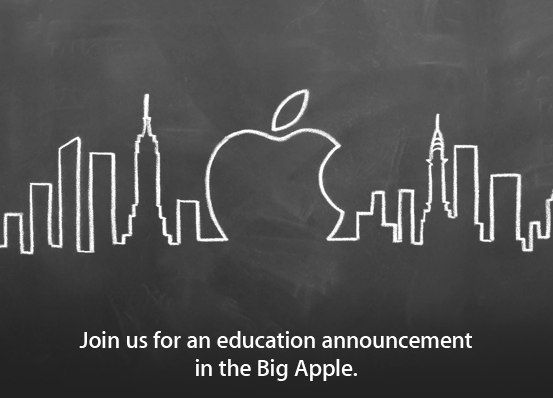 Since Apple issued invitations to its media event on January 19, there's been plenty of ink spilled about what the company will reveal. "Join us for an education announcement in the Big Apple" -- that's the only clue we have, well that and the Walter Isaacson biography of Steve Jobs and rthe revelations he was working on a plan to "disrupt the textbook industry" before he died.

Sidestepping the speculation, Phil Hill asks "four key questions" about the announcement, examining the ways in which Apple may or may not be a significant one. Will Apple follow the iTunes or the iBooks model, for example? Will it require an iPad? Will there be support for OER or will content be locked down with DRM? Will Apple expand beyond content distribution to develop a learning platform?

I have my own questions (doubts and excitement) about what we'll see, as well as a wish list, of sorts, of the things I'd like to see Apple tackle:

DEVICE MANAGEMENT: iOS devices are still very much built around the individual consumer, and as such school implementations can be challenging, particularly when it comes to managing accounts and syncing devices. Will we see an iCloud solution here?

VOLUME PURCHASING PROGRAM FOR iBOOKS: Currently iBooks aren't covered by Apple's VPP. E-Book apps are.  Will schools and libraries get to leverage their group-buying power for discounted digital books?

DISCOVERABILITY: There are some 500,000 apps available in the iTunes store, and that makes it challenging to surface new, high quality content -- educational or otherwise. Will Apple make it easier to identify apps based on grade-level? Will there be a better ratings system? (What would that look like?)

APPS VERSUS E-BOOKS (iBOOKS): As it currently stands, most of the sales of educational content in the Apple ecosystem occur outside the Apple iBookstore. People buy educational apps not educational e-books (iBooks). The enhancements available in apps like Inkling and Kno -- the ability to take and share notes, for example -- aren't available in iBooks. Will we see these sorts of features added to the iBooks app? What would make iBooks more compelling than apps for educational publishers?

AMAZON VERSUS APPLE: I should add too that it isn't just the iBooks app that really fails as a digital textbook reader. The same could be said for the Kindle app (although it does offer a first step towards shared highlights). Nevertheless, there's no doubt that the shadow of Amazon looms over Apple's announcement. Amazon's relationship with publishers and with libraries has been fraught lately. Will Apple be able to offer the publishers a sweeter deal?

AGENCY PRICING: Up 'til now, the deal has been "agency pricing," something that Apple brought about with the launch of the iPad and the iBookstore. That is, the publishers have set the price for e-books and the retailer cannot offer discounts. The retailer gets 30%, the publisher gets 70%. The Justice Department is looking into this pricing as part of an antitrust probe, and it will be interesting to see if that impacts any deal Apple can strike with publishers. One thing that's clear when it comes to pricing: digital textbooks are sure not saving readers much money. Something's going to have to change for these to be appealing to college students and to school districts.  Will Apple be able to sell digital textbooks cheaply (or give them away for free)?

CHAPTERS AND COURSE PACKETS: One of the great things about digitizing textbook content is that we can disassemble and reassemble all the various pieces that go into a one: all the chapters and exercises and diagrams from print, and all the bells and whistles and videos and interactivity from electronica. When I taught (years ago), I relied on the course packet over the textbook, trying to piece together readings for students from multiple sources. Will Apple take the 99 cent single model and apply it to textbooks and educational content? Will teachers and professors be able to suggest "playlists" for students to easily download?

SELF PUBLISHING?: This is the idea that intrigues me the most, I think -- that this isn't an event that just showcases the Pearsons and McGraw-Hills of the world, that doesn't merely prop up an old and dying industry. There have been rumors that Apple will announce a self-publishing platform. Could we see Apple cut the middle-man out here, allowing educators and experts to build and publish their own textbooks? If so, how would the content be licensed? Would Apple support OER?

SUPPORT FOR MULTIPLE DEVICES: Once we get to questions of control, things get tricky. This is Apple after all. And this is an Apple event, and so I don't really expect there to be much effort to make the iBookstore work on, say, Android or Windows devices. Heck, currently you can't even read iBooks on Macs (the app is iOS only). Device-restricted content doesn't excite me much -- even if it's free.

DRM: Similarly, content that is locked down onto a single device -- that can't be shared with others -- isn't a good model for education.  Currently the iTunesU content is DRM-free (with support for MP3, PDF, EPUB and MPEG-4 file formats). Remember: while iTunes music files were once in a proprietary format, they're now available as MP3s. Will we see DRM-free textbooks?

SOCIAL LEARNING: For all the grief folks give Google about its recent "social" efforts, let's be clear: Apple sucks at "social." Remember Ping? (Haha, no.  Because no one ever used it.) Since the failure of that music sharing network, Apple has developed tighter integration with Twitter -- that's the closest the company comes to "social."  Can this be leveraged as part of a social learning effort? Is Apple even thinking about learning this way? Or is it simply set on enhancing its content delivery platform?