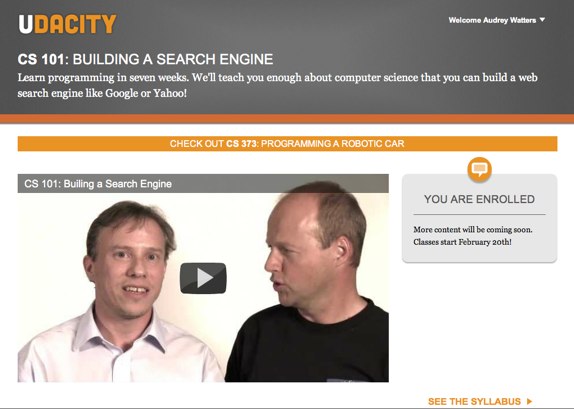 It's news that shouldn't surprise anyone that read the fine print on the registration for Stanford's Artificial Intelligence class offered last fall: Professor Stanford Thrun has announced he is resigning from the university to launch an online learning startup.

Unlike the Machine Learning and Database classes -- the other two in the trio of Stanford's free online engineering classes last fall -- the Artificial Intelligence class was run by Know Labs in partnership with the university.

Know Labs has now rebranded to Udacity, and this will be site where Thrun will offer his online CS courses, separate from the Stanford University umbrella.

The first class that's to be offered is CS 101: Build a Search Engine. "Learn programming in seven weeks," the website promises. "We'll teach you enough about computer science that you can build a web search engine like Google or Yahoo!" If you think a statement like that is a tad bold and even a bit offensive to a certain PhD student who founded Google, Thrun does get Google co-founder Sergei Brin to say a few words in support of learning computing. So go figure.

It also looks like a class on Programming a Robotic Car is in the works. (Thrun led the development of Google's self-driving car.)

Thrun announced his departure from Stanford at the DLD Conference in Berlin, and Reuter's Felix Salmon has a write-up of his presentation there where Thrun describes the popularity and success of the Stanford AI class -- so successful, in fact, that the "physical class at Stanford... dwindled from 200 students to 30 students because the online course was more intimate and better at teaching than the real-world course on which it was based."

Salmon notes with some dismay that Thrun and Stanford haven't taken the lessons learned from the AI class experiment to offer more online classes at the university. And the way he writes his story, it's clear he blames Stanford for this failiure. "Stanford was willing to spend hundreds of millions of dollars building a new physical campus in New York City — but it isn’t willing, it seems, to help Thrun build a free virtual campus which could reach the whole world. That’s a dereliction of its educational duty." But I'm not sure that's a fair or accurate depiction of what happened, particularly since Know Labs already had its name on the AI class. It's possible this direction, for Thrun, at least was already a "done deal."  Stanford does still plan on offering its free online classes, some of which -- like Thrun's -- are set to start next month.

Nonetheless, the move "off-campus," if you will, raises a lot more questions about what the role of the university will be in offering (low-cost or free) lessons and in offering certification. Those students who successfully completed the AI class received a letter of recognition from Thrun and Google's Peter Norvig, who co-taught the class, and it appears according to language in the site's Terms of Service as though the "credit" for the new classes at Udacity will work the same way.

I took a close look at the Terms of Service for the class (because even though EULAs and TOSes are not fun to read, they're too important to just click "I agree" without doing so). As such, it's clear that this is not really an "open education," despite the (initial) promise of it being free. The content is all copyrighted, and

"With respect to User Content you submit or make available to KnowLabs (including for inclusion on the Class Sites or Online Course), you grant KnowLabs an irrevocable, worldwide, perpetual, royalty-free and non-exclusive license to use, distribute, reproduce, modify, adapt, publicly perform and publicly display such User Content on the Class Sites or in the Online Course or otherwise exploit the User Content, with the right to sublicense such rights (to multiple tiers); except that, with regard to User Content comprised of a translation of an Online Course lecture video, you agree that the license granted to KnowLabs above shall be exclusive. KnowLabs reserves the right to remove any User Content at any time and for any reason."

Not so open. Not too committed to sharing educational resources with everyone.

According to Salmon, Thrun hopes to enroll 500,000 students in this first class. As such, Udacity is hiring -- and no doubt working hard on building those "robot graders" I keep alluding to.