At the 10 year anniversary of MIT OpenCourseWare last spring, the university and the larger opencourseware movement had a lot to say about what was next for the open education initiative. Over 100 million people had already accessed the content that the university had made freely and openly available, true, but it seemed clear that more could be done to really magnify the impact of the resources.

One of the initiatives that MIT OCW has undertaken since is called OCW Scholar. It takes the course materials and packages them specifically for independent learners. 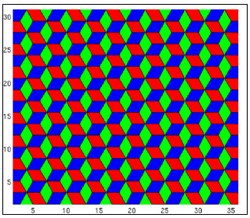 Today one of MIT OCW's most popular classes (and one that was part of the original 50 offered when MIT OCW launched) -- 18.06SC Linear Algebra -- gets the OCW Scholar treatment. (Course link here) Taught by MIT math professor Gilbert Strang, the class covers matrix theory and linear equations and other things that I know so little about I can hardly do more than cut-and-paste the course description.

What makes the OCW Scholar courses different than the university's other OCW materials is that it isn't just a repository of all the readings, syllabi, handouts and lectures (as awesome, of course, as all that is). These OCW Scholar courses have been designed to help support independent learners, particularly those who don't have access to other resources (as do those students who are sifting through the MIT materials to supplement their own college classes).

The OCW Scholar classes have more materials, for example, in this case including not just the videos from course lectures, but lecture summaries and short videos demonstrating how to do specific problems, created by MIT TAs. (The TAs' bios are here) Most crucially, perhaps, there is a study group for the class, facilitated via OpenStudy. That means independent learners needn't tackle this material alone.

Like the other MIT OCW courses, Linear Algebra is freely and openly available. There is no academic credit (but that's something we might actually start caring less and less about, eh?)

Coming soon: OCW Scholar courses in Principles of Microeconomics, Differential Equations, Introduction to Psychology, Fundamentals of Biology, Introduction to Electrical Engineering and Computer Science I, and Introduction to Computer Science and Programming. (That last one will be particularly interesting to watch now that, by my count, Stanford, MIT OCW, and now Sebastian Thrun's Udacity are all offering a CS class to the general public. Code Year anyone?)