President Obama announced the 10 states that will receive waivers to No Child Left Behind this week: Colorado, Florida, Georgia, Indiana, Kentucky, Massachusetts, Minnesota, New Jersey, Oklahoma and Tennessee (New Mexico applied for a waiver but it was not granted.) The Washington Post's Valerie Strauss takes a closer look at what these waivers mean, arguing that "States are swapping one president’s education vision for another, and both involve the overuse of high-stakes standardized tests."

U.S. Representative Mike Doyle (D-PA) has introduced a bill -- The Federal Research Public Access Act -- that stands in directly opposition to the Research Works Act (RWA), a bill supported by the publishing industry and lambasted by researchers and scholars. Unlike the RWA which would put federally-funded research behind a paywall, Rep. Doyle's proposed law would mandate free and open access to it.

The Google Books lawsuit "lurches forward." That's the headline on Paidcontent's story of the latest moves in the longstanding battle between publishers, the Authors Guild, and Google. Google is trying to remove the Authors Guild from the case, arguing that this isn't a "class action" suit. As writer Jeff Roberts notes, "ground has shifted considerably since the scanning controversy first erupted," with e-books becoming ubiquitous and Google no longer appearing to hold the monopoly over digitized content.

MindShift reports that several California universities are restricting what students can do with their class notes. The crackdown isn't entirely new (I reported on actions taken at Sacramento State back in October 2010), as schools have long held that students cannot publish or distribute their class notes for commercial purposes. The move does raise questions about the legality of many note-sharing sites, including Notehall which was acquired last year by Chegg.

What are the legal boundaries when it comes to copyright and fair use? Unfortunately, it's not always clear, and these questions tend to be resolved via lawsuits (The Authors Guild, I'm giving you one of Paddington Bear's cold hard stares over this.) But as Inside Higher Ed's Steve Kolowich reports, librarians are "going on offense — not with a lawsuit, but with a formal set of guidelines that it hopes will help libraries be more confident and less fearful of crossing ordinary copyright thresholds under the auspices of fair use." The Association of Research Libraries has released a "Code of Best Practices in Fair Use for Academic and Research Libraries" to help clarify things.

MIT OCW has launched the latest class in its OCW Scholar series. (I covered the first of its 2012 courses here). This time around, it's Differential Equations that's now available as a OCW++ course -- that is, lecture videos, course notes, demonstrations, and problem-solving videos created by MIT recitation instructors.

Blackboard unveiled the latest version of its LMS this week, with a focus on the UI and UX. Inside Higher Ed's Joshua Kim has a look at what the company has dubbed "Blackboard Ocho."

If you are a teacher using Android App Inventor in your class this spring, you can get early access to the latest version, available through MIT's Mobile Learning Center.

Mozilla's Eric Knight has laid out the road map for the organization's Open Badges initiative. Included in the plans for the year: a public beta and issuer and displayer APIs.

ProfHacker's Mark Sample takes a look at the latest version of the research and citation tool Zotero, along with the first ever Zotero client for the iPad (iTunes link).

LearnBoost continues to roll out the updates to its suite of online classroom administration tools. Once upon a time, I used to describe the startup as a "grade book," but it's clearly become a whole lot more. Last week, it enabled embeddable media in its lesson plan feature; this week, it's syncing with Google Calendars.

ShowMe has released several improvements to its iPad app, including much better writing tools making it far easier (smoother and more legible) to write on its whiteboard. Another new addition: Google Image Search within the app in order to pull images into the lessons you're building there.

The white Macbook will be no more. Apple ceased selling the devices to consumers last summer, and now it's ending sales to schools as well. Many are speculating this means more of a push for iPads in schools, although it appears as though Apple plans to offer alternatives to schools, including a lower-cost 13" MacBook Air.

It appears as though the discussions between the major publishers and the ALA didn't go so well, judging by the news yesterday that Penguin will be terminating its contract with Overdrive, one of the major distributors of e-books to libraries. Starting February 10, Penguin's e-books and audiobooks will no longer be available through Overdrive for libraries to lend their patrons. Penguin is owned by the education giant Pearson, a company with "learning" in its motto but perhaps not in its mission.

Interesting stats from a recent Book Industry Study Group survey of over 1600 college students. It found that sales of digital textbooks actually fell between 2010 and 2011 -- from 6% to 3%. While 46% of respondents said they were interested in tablets, just 3% of students say that they currently use e-readers or tablets to read textbooks.

According to the College Board, the number of students taking and passing AP exams is up -- up from 16.9% in 2010 to 18.1%. However, the College Board also noted that many academically qualified students aren't sitting the exams, either by choice or because the courses are not offered at their schools.

The National Association of Consumer Bankruptcy Attorneys has surveyed almost 900 bankruptcy lawyers, and finds that 80% are reporting a "significant" or "somewhat significant" increase in potential clients with student-loan debt, reports The Chronicle of Higher Education.

Just how lousy are the working conditions for adjunct faculty? Josh Boldt, a writing instructor at the University of Georgia has set up a Google Doc in which he's asking instructors to share data about their pay, contracts, and benefits. The plight of the adjunct is gaining increasing attention, thanks in no small part to the new MLA president, Michael Bérubé.

California has axed all state funding for public libraries. For once, I'm speechless.

Khan Academy continues to beef up its engineering staff with the addition of this week of Craig Silverstein, Google's very first employee. No word yet on what Silverstein's role will be at Khan Academy. "Programming," he suggested to Mike Swift from The Mercury News. But considering his role in making Google "Google-y," it will be interesting to watch how or if his move from one big tech organization to another marks a shift in culture. Also, mad props to EdSurge for breaking this story, and curses to anyone who described it as "a newsletter" without offering a link.

The Yale Daily News reports that Open Yale Courses may be in jeopardy as the grant money that funds the university's open courseware initiative runs out at the end of this year.

The Irish non-profit Coder Dojo is coming stateside, launching its first Dojo in San Francisco, hosted by the social code repository Github. Coder Dojo offers classes and mentorship to help kids age 7 to 18 learn programming. The classes are free and laptops are provided to those attendees who aren't able to bring their own.

The eighth annual Google Summer of Code has launched. The program offers an opportunity for university students to work on real-world, open source projects for mentoring organizations from around the world. 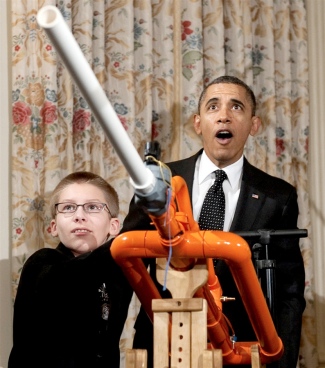 The White House hosted a Science Fair this week, hosting a number of great projects, awesome young builders, scientists and makers, and resulting no doubt in the best photo of President Obama this week.

Harvard held a conference this week, focusing on teaching and learning. "In large part, the problem is that graduate students pursuing their doctorates get little or no training in how students learn," writes Dan Berrett for The Chronicle. "When these graduate students become faculty members, he said, they might think about the content they want students to learn, but not the cognitive capabilities they want them to develop." Much of the event focused on problems with the lecture, which "fails at ... educational goals: prodding students to make meaning from what they learn, to ask questions, extract knowledge, and apply it in a new context."

In an email to those who took his online AI class last fall, Sebastian Thrun gave a few more details about his new startup Udacity, which has also posted a slew of new classes "coming soon" onto its site. Thrun says that "In the next months, we will offer an entire computer science curriculum through Udacity, and offer certification services so that an entire degree can be obtained online."

Things might not be going so well for Udacity's competitors back at Stanford as several of the popular classes that were supposed to be offered this spring have disappeared from the list of offerings, including the Tech Entrepreneurship and Lean Launchpad classes.

Dan Meyer, What Silicon Valley Gets Wrong About Math Education Again and Again

George Siemens, Openness: Why learners should know about, and influence, how decisions are made about their learning