MITx Opens for Enrollment (and Certification - For Now - Is Free) 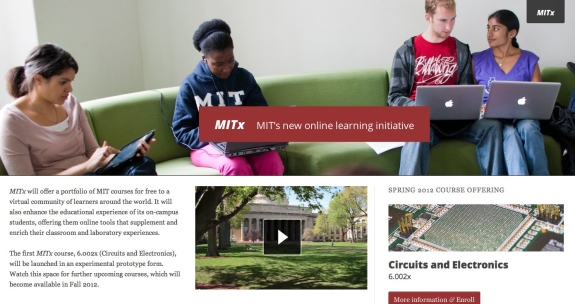 MIT opens registration today for the first of its online courses offered as part of its new MITx initiative. The university announced MITx late last year as the next step not just in informal online learning but in alternative certification. Registration for MITx is free and open to anyone, and for this first "prototype" class, there is no additional charge to receive the certification upon successful completion of the class.

This first class is "6.002x: Circuits and Electronics." It will run from March 5 through June 8 and will be taught by Anant Agarwal and Chris Terman (co-directors of MIT's Computer Science and Artificial Intelligence Laboratory), Piotr Mitros (one of CSAIL's research scientists), and Gerald Sussman (a professor in the department of electrical engineering and computer science).

According to the course website, the class will demand approximately 10 hours a week from those enrolled. There will be video lectures and demonstrations, homework exercises and an "online interactive lab specifically designed to replicate its real-world counterpart." All of the assignments and exams will be graded by "robots," or rather artificial intelligence software. Use of this machine grading makes it possible to scale the offering to the same sort of level that Stanford experienced with its massively popular online offerings last fall. For now, verification of students' academic honesty in the MITx course will rely on the "honor code," but in the future the university says it will develop a more sophisticated system checking students' identities and curbing plagiarism and cheating.

Circuits and Electronics, as the name of the course suggests, is meant to be an introduction for electrical engineering and computer science majors. The materials for 6.002 are already available via MIT Opencourseware, but MITx clearly offers more than just the syllabus and readings.

But the connection to MIT OCW is important here, and it's something that makes MITx quite distinct from some of its online learning competitors. As MITx is situated as part of the university's broader mission, MIT isn't just offering isolated courses or content here, disaggregated from other related materials and/or catering to people who already have a fair amount of expertise in a field. Rather the MITx classes will be situated as part of the larger university curriculum and tied into its other online learning initiatives. There will be a list of all the related curriculum and courses on the MIT OCW website, for example, with the pre-requitsites available (and/or coming soon) as MIT OCW Scholar classes.

Much of the initial interest in MITx has focused on the certification part and the question of whether or not a letter from MITx will mean much on the job market.  If a certificate from MITx (or Udacity or the like) is accepted, so the argument goes, "the jig is up" for higher ed.  But by situating MITx as part of the larger educational mission of the school, it appears as though MIT is making a different argument here for its continuing relevancy -- not just as an issuer of diplomas and certificates, but as a source for a "world class education."