At O'Reilly Media's Tools of Change for Publishing conference today in New York, the digital textbook app-maker Inkling unveiled Habitat, a platform whereby other publishers can tap into the Inkling technology and production infrastructure in order to create their own interactive e-books. Techcrunch's Rip Emerson has a good write-up of the news, something that he describes -- not surprisingly -- in light of Apple's recent textbook announcement. 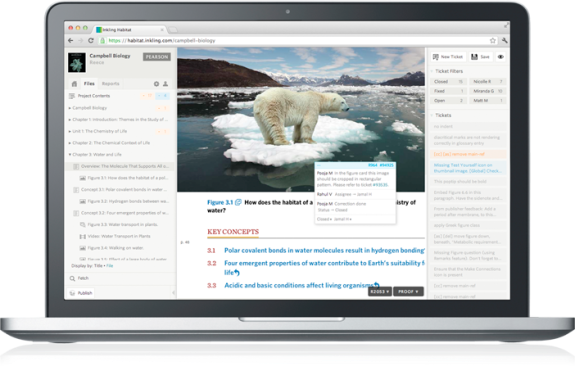 As my assessment of the Apple news probably made clear, I'm not too fond of the textbook as an academic artifact. I am however quite intrigued by Inkling. Considering how I've railed against textbooks lately, I should probably explain:

When I first talked to CEO and founder Matt McInnis in early 2011, it seemed clear to me that he recognized that textbooks are a compilation of resources, and when we talk about digitizing textbooks, we're really missing the boat if we simply take the static content of the textbook and repackage it in an electronic format -- a PDF with a few bells and whistles and maybe some video embeds. When McInnis explained the company's vision to me, he said Inkling's plans were to "gently disassemble the textbook, describing the process as an engineering problem not a publishing one.

When McInnis and I spoke again last week and he briefed me on Habitat, he reiterated this sensibility. "To reinvent the book, you have to reinvent the printing press," he argued. Desktop publishing was the first step in doing just that, but even the shiniest of high-end software there hasn't really addressed some of the inefficiencies in the publishing system (handwritten comments on drafts, emailing massive files back and forth, and so on). The Habitat platform, which is just open to a few early adopters and should be open to more publishers later in the year, deals with both the production and the human processes that go into book-making -- managing the production team in a better cloud-based, collaborative environment.

But this isn't a DIY, self-publishing platform like iBooks Author, it's worth pointing out (although I suppose eventually Inkling could open it up to everyone).

What it is, says McInnis, is part of Inkling's "semantic publishing platform" and that description --along with his comments about the disassembly of the textbook -- make me excited about the possibilities of, well, disassembling the textbook. It isn't just that the parts of an Inkling e-book are marked as chapters or illustrations. There's a richer level of metadata here so that pieces can be marked up with their learning goals, for example. I think that markup and metadata could make it easier for us to disassemble textbooks -- and I don't just mean e-books built on the Inkling platform, but how we approach any number of digital learning resources.

Inkling also announced today it will have an HTML5 reader available this spring, good news for Web-based reading and non-iPad owners.

Inkling will also soon carry some of the most popular O'Reilly book titles. And here finally are the interactive e-book guides that I have been waiting for -- work on learning to code by coding right into the textbook itself. (No word on when these titles will hit the Inkling store shelves).