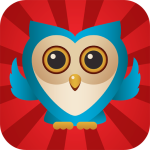 At its education event last month, Apple made the point of touting the amount of educational content it offers via its App Store: some 20,000 apps fall under the "education" category. But we really shouldn't confuse quantity and quality when it comes to educational content. Indeed, in some ways, the abundance of educational apps makes it even tougher to locate good ones -- even with Apple's promotion of featured apps and bestseller lists and with the App Store reviews.

How do you know which apps have an educational (not just entertainment) value, which apps are developmentally appropriate, which apps teach particular content or focus on a certain subject (either in general, such as math or literacy apps, or more specifically, such as those that teach addition or phonetics)?

That's where the startup Kindertown steps in, with an (educational) App Store within the (Apple) App Store. Hoping to take advantage of the trend of parents increasingly using mobile devices (and handing those devices over to their kids), Kindertown provides a free app that curates and reviews what it believes are the best educational apps out there. 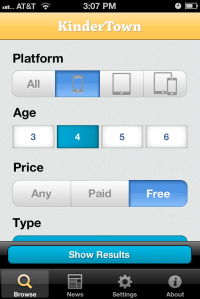 Currently the app works on iPad, iPhone and iPod Touch and only offers insights into Apple's educational app content. But as such, it lets users filter apps based on type of iOS device, age range (currently the focus is on early childhood education, so that age range is 3 to 6), and free or paid. Users can also indicate if they're looking for particular subject areas -- math, language, art, social studies, or science, with the latest update to the app offering further drill-down into the specifics of a particular subject (for example, in the case of math, you can search for geometry, logic, measurement or number sense apps). From there, you can read more information about the app, read the Kindertown review, look at screenshots, and should you choose, download the app.

While it is possible for developers to submit their apps for review and inclusion in the Kindertown store, most of the legwork in identifying quality apps is done by the Kindertown team itself. I spoke with Carolina Nugent, the company's Director of Education, who explained the process that she takes -- going through different review sites, pouring through the App Store, "spending hours searching for the gems." She said that she looks for a number of things in an app -- that it offers scaffolding, for example, and effective feedback for learners. Most apps, even those earmarked as "educational" by the Apple App Store, don't make the cut for Kindertown.

As I argued last week when I reviewed Chalkable, an app store for schools, the problem of "discovery" in educational content is a substantial one. For its part, I should note here, Kindertown is aiming at parents, not schools, with its app store -- but I'm not sure that we should make too much of that distinction. EIther way, there's a lot of potential (and demand) here to make good recommendations for the grown-ups downloading the apps -- whether it's by curation from the Kindertown team, reviews from educators, or suggestions from other parent-friends.

There's also potential too -- particularly if Kindertown can establish itself as a reputable voice in the educational app world -- for it to build other services and products alongside its app reviews. This could include specific recommendations based on previous purchases, usage patterns, and so on. Some of this would require educational app developers tapping into a Kindertown SDK, and most app developers "aren't ready for that," says COO Brennan Knotts. Hopefully they'll get ready in fairly short order.