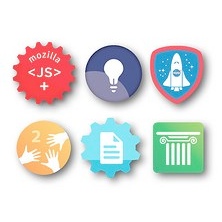 The winners of the "Badges for Lifelong Learning" competition were announced this past week at DML2012. It's hardly surprising, with it being the focus of the research competition, that much of the conference -- formal sessions and informal conversations -- was devoted to the questions surrounding badges: what are they for? what will they do? what practices will they reward? will badges change what we learn, what we value? how?

Despite the conference's official support for badges, it seemed that many of the attendees were deeply skeptical, if not cynical about them. Hardly a session went by without some sort of "and you can get a badge for it!" snicker.

It's an easy joke to make, no doubt, although I'm not sure it's due to any the specifics of the Open Badges project itself. Rather I'd say it's due to the ways in which badges and other similar tokens -- digital and otherwise -- have been slapped on almost every product and service imaginable. Gold stars. Rewards cards. Premier Platinum Frequent Flyers. Foursquare mayorships. WoW achievements.

These all might serve to create more loyal customers. (Might.) But is this the model we want for learning? In the broadest possible sense, I guess we could argue that, sure, we do want loyal lifelong learners. But will badges foster loyalty to learning? Or will they curb a free and open-ended exploration in exchange for commitment to a particular brand or path?

These questions about motivation are really important, and I don't want to dismiss them. But I think it's important to remember that motivation for learning is actually quite varied and there are a lot of very practical, economic realities that shape both the intrinsic and extrinsic aspects that prompt us to learn. As such I don't think we can argue that a reward necessarily destroys or corrupts.

And I also think Open Badges offer more than just a reward, even if that's what badges -- the lower case B kind, both new and old, digital and sewn onto sashes -- have long been about.

Badges (the capital B kind) aren't the only thing that does any of this, of course. We have all sorts of credentialing practices, for example -- college degrees being the most obvious (and/or the most accepted, the most desirable, the most expensive, the most broken).

We also have all sorts of recommendation practices. These range from formal to informal, meaningful to meaningless -- the difference between listing 3 folks on a job application who are willing to vouch for you if called upon during the final stages of the hiring process and having a really well-connected friend "put in a good word" at the beginning of that same hiring process.

Open Badges aren't the digital effort underway either. Just this week, former Delicous founder Joshua Schachter launched Skills.to, where you can "tag yourself and your Twitter friends with endorsements for skills."

Skills.to is a little bit recommendation, and if you look at the list of the most recommended people on the service so far, a lot reputation. Clearly we are wrestling with the ways in which our digital lives enhance and detract from reputation. The Web in particular provides all sorts of new ways for us to showcase who we are, what we do, who we know, what we make, what we've done, where we've been -- for better and for worse.

Why, then, do we need Badges? Shouldn't our work speak for itself? Doesn't the Web afford us ways to escape some of the older (offline) reputation and rewards systems? Shouldn't we have a domain of our own where we can highlight our accomplishments and our skills?

I'm not sure that the Open Badges project purports to replace any of that. Indeed, the Badges might be utilized as widgets to enhance a personal website, combining recommendation and reputation and reward in one packet, rather than on multiple pieces of paper. I use "packet" purposefully here -- not just as e-portfolio or job application but as JSON packet, the data exchange the Open Badges contain -- all the information about the issuer, the recipient, and other metadata, including "the evidence" of the accomplishment or skill.

As I've written previously, one of the most important aspects -- in my opinion -- of the Open Badges project is that it is "open." The infrastructure is open (anyone can become an issuer). The technology is open (open source). And users control their own data.

This makes the initiative very different from many of the other products and services on the Web that also claim to offer recommendations and endorsements (and that, if I were to make a prediction, are also very keen to move into the "alternative credentialing" space). Take LinkedIn, for example. If you choose to close your LinkedIn account, you can download a list of your "connections," but you cannot export the endorsements that others on the site have written for you. "You own your data," LinkedIn assures you, but they're controlling it. They're selling it.

With the vast amounts of data that we create (around all our online transactions -- learning endeavors or otherwise) and with it scattered across numerous sites, there has been a growing interest in and demand for data liberation. Now I don't know if, as a society, we'll make a transition to personal data lockers (check out Sing.ly and the Locker Project). The forces behind closed, walled gardens are strong (IPO strong). Perhaps Open Badges could be part of this effort.

But that means reframing some of the discussion around badges, away from just about rewards and alternative credentialing, to learner data ownership and liberation.  Considering some of the winners of the DML Competition -- well, Disney and Microsoft specifically -- perhaps this will be the first true test of how this new open infrastructure will work, not just to better demonstrate learners' skills but to give them better control over their learning data (and their recommendations and reputation).

Disclosure: I'm doing research work for Mozilla, the builder of the Open Badges infrastructure, but my work is unrelated to this particular initiative.