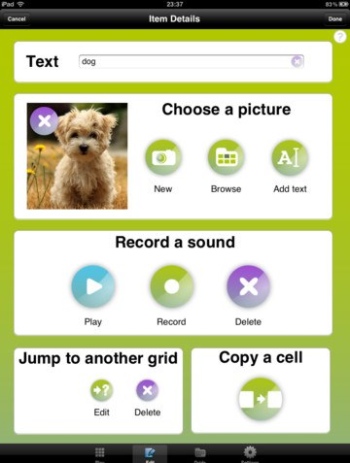 It’s hard to know where to begin in describing the iOS app Tapikeo, which just received a fairly substantial update to its iPad version (iTunes, $2.99). “Audio picturebook creator” really doesn’t do it justice. Nor does “flashcard maker.” Nor does “storyboard creation tool.” Nor does AAC app. It’s all of those things and more.

The key to “more” here is the open-endedness of the app. At its basic level, Tapikeo lets you combine pictures plus sounds. From there, it’s up to you.

There’s a grid-style layout into which pictures can be imported or snapped, audio recorded, and text added. The app comes with 4 demo grids, and 5 more are available for in-app purchases (it's worth pointing out that the design of the app makes it difficult for kids to purchase these themselves). There are even more free grids available to download too. An animal grid with photos and the animals’ respective sounds. A bird grid, also with photos and sounds. A construction vehicles grid with photos and the trucks’ names. Alphabet. Numbers. Time. Colors. You get the picture.

Touch a photo, and hear the word or sound you’ve associated with it. But as you can create your own grids, add your own photos and sounds, and build your own storyboards, there are lots of possibilities for what you can do with Tapikeo, and the app would work well for kids who are pre-reading, kids with disabilities, older kids who want to build mobile presentations and books, and anyone who wants an audio-visual study tool.

All the stories that are made in the app can be exported as HTML, so the content can be shared with others.