Last fall, 3 Stanford classes were offered free, online, and open to the general public: Artificial Intelligence, Machine Learning, and Intro to Databases. Their popularity far exceeded the university’s initial expectations from what I can gather – hundreds of thousands of students in a class’ll do that, I suppose. Since then, interest in Stanford's MOOC experiment has continued, seemingly taking two paths: the first was Sebastian Thrun’s startup Udacity (Thrun taught the AI class and left the university saying "I can't teach at Stanford again").

And now, two other Stanford professors, on leave but still affiliated with the university, are officially unveiling their startup, Coursera.

That Daphne Koller and Andrew Ng have started their own company isn’t exactly news (Ng taught last fall's Machine Learning MOOC, incidentally). I covered Coursera earlier this year. But today the startup is pulling back the curtain on its plans, announcing that it’s raised $16 million in funding from Kleiner Perkins Caufield & Byers and New Enterprise Associates. It has also secured partnerships with four universities – Princeton, Stanford, the University of Michigan, and the University of Pennsylvania – which will offer open online courses through the Coursera platform.

Over 1 million students have already signed up for the initial courses that Coursera’s had posted on its website. There have been some delays – legalities over licensing and copyright, according to the word on the street – in getting these up and running, but starting April 23, there’ll be at least 30 new classes offered via Coursera. 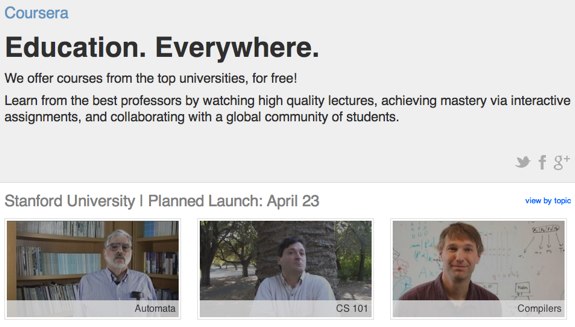 There’s been a lot of talk about the ways in which these sorts of massive and free online classes are going to “change higher education forever.” It’s the promise of scaling a university education to everyone… well everyone with an Internet connection, that is. And, um, everyone who’s ready for a fairly advanced computer science course (it’s worth noting here that of the 160,000 students who signed up for Thrun’s AI class, only about 20,000 successfully completed it -- not too shabby actually. But note also: many of those were already well-versed -- PhDs, even -- in the subject.).

Interestingly, with all the hubbub about MOOCs lately, there's been little questioning of who and what's being taught. There's been litte talk in the mainstream about expanding these latest MOOCs beyond the CS department (funny, considering MOOCs' disciplinary lineage).  Of course, part of the reason why these giant classes can work at this scale is because of the particular CS tech involve, that is, their use of AI technology to assess students’ quizzes and homework assignments. There are only certain classes (perhaps. for now) that robot graders can grade, after all.

So what’s exciting to me about the Coursera news today isn’t just that we’re seeing another new online learning startup à la Udacity or another set of universities entering the MOOC fray (joining MITx, for example).

Both Udacity and MITx – as well as those 3 Stanford classes last term – focus on CS, but Coursera’s course catalog will extend beyond that one discipline. Ng and Koller promised me classes in poetry. They said there’ll be classes in science fiction and in folklore.  There'll be sociology.  There'll be continuing ed in medicine.

“How will you grade this?!” I asked (fearing, I confess, the machine learning professor Ng’s answer would be “machine learning, of course!”). But Koller and Ng said that they remained skeptical about the ability of that technology to offer high quality feedback or assessment for students. So they’ve built something else – not an automated grading system.

Rather, says Ng, the engineering efforts at the startup have been focused on “building up a peer grading technology” where students are trained to grade each others’ work according to the professor’s specifications. It’s what Ng described as a “calibrated peer-review” – in other words, a little bit peer review and a little bit crowdourcing. The latter works akin to Amazon’s Mechanical Turk, whereby microtasks are distributed and labeled and as a result “the best” feedback can be surfaced. “The numerical grade, while useful,” says Ng, “isn’t really the best form of feedback.”  Students need feedback, not just grades.

Will the students in the Coursera classes will be supportive of one another (it's a question I raise based in part on my experiences in the Udacity forums)?  That remains to be seen.  Nonetheless, the focus on peer feedback is an interesting one, as talk about "scaling education" tends to focus on boosting the technology capacity and not boosting human connectivity.

Changing Higher Ed: Online and Off

As such, this isn’t just about building a technology platform that can scale “content delivery” or extend certification to hundreds of thousands of students, Coursera co-founders insist. “Pedagogy is equally important,” says Ng, noting that when we switched from scrolls to books, we had to rethink how teaching and learning happened. And now again, it’s time to reconsider these things. Who do we best teach online?  How does pacing change when you move your lectures online?  How much, truly, can we rely on lecture after all?  How often should assessment happen and what does it look like? What’s appropriate feedback? How do we support and connect learners in a MOOC? How do we support faculty?

And how does this change the university? Are these "disruptions" just online, or is the offline, on-campus experience changed now as well?

“There’s a growing amount of content out there on the Web,” says Koller, “and so the value proposition for the university is no longer simply getting their content out there. Rather, it’s fostering that personal interaction between faculty and students and students and students.” By being able to take advantage of online educational content -- particularly lecture content from some of the best professors at the most pretigious universities in the world -- students will benefit too. It’ll mean that the university classroom can be “flipped” – with lectures pre-recorded and assigned as homework. Koller, who’s been flipping her classroom since well before Khan Academy popularized the term, says that universities have been reluctant to add “active learning” opportunities at expense of covering “the curriculum” via lecture.  And thanks to the increasing wealth of online classes, there’ll be more opportunities for hands-on on-campus experiences.

And in turn, by making that content available – freely and openly on the Web – that will mean a “better education for everyone,” say Ng and Keller.

Registrations are open now for several of Coursera’s classes. I for one plan to put their promises about poetry and peer review to the test.