Inside NYU art professor David Darts’ black metal lunchbox, painted with a white skull and crossbones, is the PirateBox – a tiny Linux server, a wireless router, and a battery. Turn the PirateBox on and you have a self-contained mobile communications and file-sharing device, whereby those in the vicinity can upload and download files securely and anonymously. (See this 2011 Ars Technica story for photos and details.) Built with free and open source software and openly licensed itself, the PirateBox has inspired a number of other projects, including Alan Levine’s Storybox and now Jason Griffey’s LibraryBox. 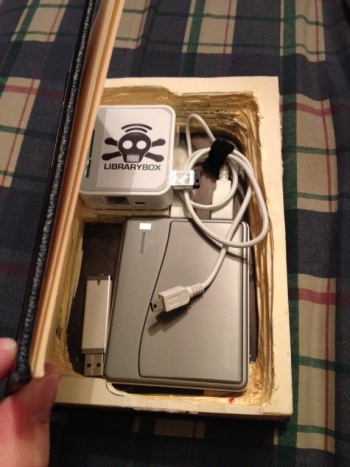 The head of Library Information Technology at the University of Tenneessee at Chattanooga, Griffey has built a prototype of the LibraryBox, whose “guts” sit nestled in a carved-out book rather than in a lunchbox, and he’s looking for help in customizing the device to better suit the needs of a mobile DIY library.

As with its lunchbox ancestors, the LibraryBox generates a wireless network that anyone can join via a WiFi-enabled device. That network isn’t connected to the larger Internet, just to the box itself. But from there, people can access the contents of its file server – and they can do so anonymously as no data is tracked or stored on who they are or what they download. There's also no need for specific e-reader hardware or apps, as even the cheapest of cellphones tend to have WiFi, and e-books can be downloaded and opened in several formats (including HTML, ePUB, PDF, and QiOO Mobile).

Griffey says the LibraryBox will “take the 'pirate' out of PirateBox.” That doesn’t mean exorcising the spirit of the larger PirateBox project, which its creator Darts says was “inspired by the free culture and pirate radio movements” and serves as a “playful remixing of the title of the world’s most resilient bittorrent site, The Pirate Bay.” Rather, replacing “pirate” with “library” makes it more apparent, in Griffey’s case, that this is about open access to information and to books. As he describes some of the inquiries he’s received about the LibraryBox, it’s clear that this device could have enormous potential for boosting literacy and education and for opening access to digital educational materials.

Griffey says he has lots of plans for LibraryBox that will make it a true fork of the PirateBox project (making it easier to install for those folks unfamiliar with the Linux command line, for starters). He’s also pursuing a way to scrape Project Gutenberg for public domain content. Drop him a line to help out.