Inkling Finally Brings Its Interactive Textbooks to the Web

The interactive e-book publisher Inkling has finally released an HTML5 version of its app, meaning that its 150 titles are now available on both the iPad and the Web.

Maybe it’s unfair to say “finally.” It has only been 2.5 years since the iPad was first unveiled and since Inkling, founded by the former Apple education exec Matt McInnis, came out of stealth with a textbook app that really highlighted the potential for re-engineering -- not just digitizing -- educational resources for these new tablet devices.

Then again, it’s been 2.5 years. I’d argue that Inkling’s app and vision remain at the forefront for reimagining textbooks and building the technology to support that. But technology moves pretty quickly. In those intervening years, the iPad has seen rapid adoption, but digital textbooks -- particularly ones that aren’t available across devices or across platforms (as has been the case with Inkling up ’til now) -- really haven’t. McInnis told me in an interview last week that he couldn’t have pitched Sequoia Capital (one of its investors) back in 2010 “to put educational content on the Web behind a paywall.” Digital textbooks needed the iPad then to pique people’s interest. They needed the Apple App Store. But now, they need the Web in order to escape the control of that very Apple ecosystem. They need the Web to gain more widespread adoption.

Inkling also needed some of the advancements that Web technologies, namely HTML5, have made over the past few years. The Web standard has reached a point of power and stability, and the new Inkling HTML5 Web app can have all the features of the very slick iPad app, but with no Flash and no Java and no plug-ins -- just HTML, CSS, and JavaScript. McInnis says proudly it may be the “most sophisticated HTML5 app ever written.” (It’s worth pointing out here that that sophistication relies on using an up-to-date webkit-enabled browser -- in other words Chrome or Safari.)

By making a feature-rich interactive textbook app that works across platforms – on the iPad and on the Web -- it may well be that Inkling has tackled here one of the major complaints that students have had about digital textbooks: students want to have access to their books across multiple devices. (Other obstacles to student adoption remain, including cost, of course.) 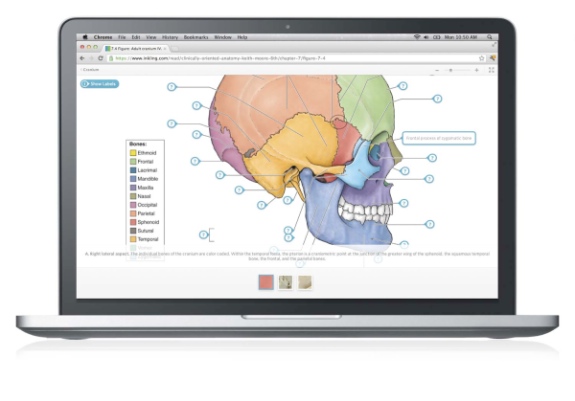 Inkling has taken care to think about what the reading experience is like depending on different devices too. What appears in a mobile Web version isn’t simply resized, but it’s redesigned from what you see reading that book on your laptop. Indeed, how do we read differently when we’re reading on a mobile device (particularly when we too are “mobile”) versus at our desks? Do we still prefer to highlight and take notes into an e-book on a laptop than it is on an iPad? Do we prefer to re-read those notes -- review, study, cram -- on a mobile device? Do we prefer to have access to the Web and to other apps (multi-tasking still sucks on the iPad, after all)? I’m not sure – it likely depends on the student, I suppose.

Inkling’s recently released Habitat means that publishers will be able to “build once” and design their content for all these platforms. That may well be a big draw for publishers.

But again, we will see if this is a big draw for textbook buyers.