Hands-on with the New Google Chromebook 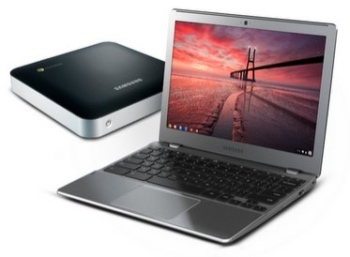 Disclosure: Google has loaned me one of its new Chromebooks to test drive. I own the previous model, which I received last year at Google IO. That Chromebook dutifully serves as our household “backup computer,” a task for which it’s perfectly suited (that’s a back-handed compliment, I realize).

Last week, Google unveiled its latest Chromebook, the notebook that runs its Chrome operating system. It’s both a hardware and a software refresh: a new Samsung chassis (and the introduction of the Chromebox, a desktop computer) and Aura, the latest version of the Chrome OS.

And for the first time, it really fells like an OS. Before now, using a Chromebook was a stark reminder that you were “stuck” with the browser. Google has taken steps with the latest Chrome OS to make it feel more OS-y. Or at least, it’s more app-y. Web apps are more app-like now, less bookmark-like (although that remains what they are). 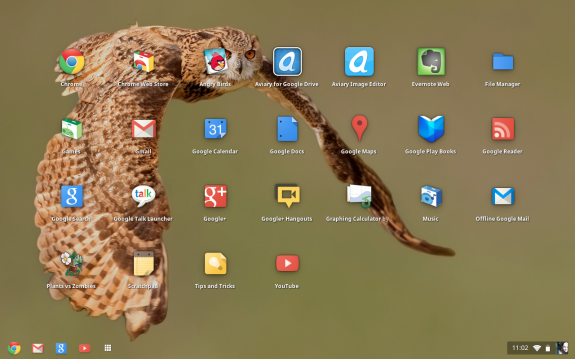 The new Chrome OS lets you access and launch your apps via a more traditional desktop view. You can also escape – or at least resize – that Chrome browser. There’s now a launch bar at the bottom of the screen. You can select how you want these apps to launch too: normally as a new browser tab, or as a separate “window” that is stripped of the tool- and address-bar. 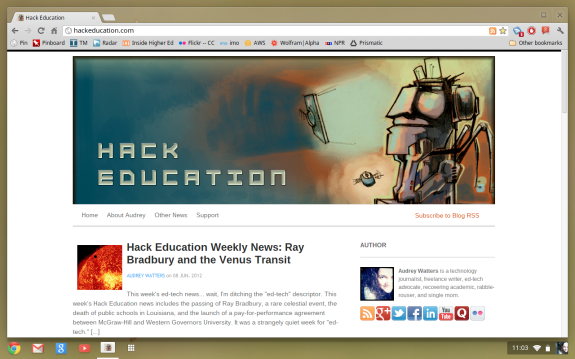 The Chrome OS still lets you sync all your apps, bookmarks, and now tabs across all your Chrome-browser-using devices. Even with focus on apps, this is still a browser- and Web-oriented operating system. And it still centers on your being a Google Apps user. Many schools are, of course, and that makes Chromebooks pretty appealing.

But the big problem remains: working offline. A Web-based operating system would demand the Web – a WiFi connection. Thanks to the offline capabilities of HTML5, it is possible to create Web apps that aren’t reliant on an Internet connection, and you can find them in the Chrome Web Store: Angry Birds, for example, as well as Google Books.

The cornerstone of Google Apps -- and hence of Chrome OS -- is Google Docs, or rather, Google Drive. It’s still not available offline, although Google does say that’s coming in the next six weeks or so. Until then, Chrome OS feels at best incomplete and at worst unreliable.

Like I said, I really suck at gadget reviews; I'm just not that much of a gadget freak. And in the case of the Chromebook, it’s the OS that I find most interesting; the hardware, not so much. But a few, obligatory words on it:

When the first Chromebooks launched last year, they were widely panned by critics who found them underpowered and who argued that most people weren’t ready for a Web-app-only device.

Power doesn’t feel like a problem with the new Chromebook. It’s by no means souped up (1.3GHz processor and 4GB of RAM), but powerful enough for Chrome OS and probably suitable for most users. The new device felt fast, and I still marvel at the speeds with which it boots or wakes up (as in, seconds). And unlike my Mac which struggles painfully with Chrome, the Chromebook handled lots and lots of tabs without crashing and without spinning the fan into a frenzy. It’s not a surprise, I realize, that the Chromebook handles the Chrome browser better than the Mac; but it was a welcome change nonetheless.

Despite these improvements, I do think the other part of early Chromebook critiques still stands: it's not the readiness of the Chrome OS or the Chromebook, but the Web-readiness of us. And that’s still the biggest obstacle to Chromebook adoption, I’d argue. If you’re considering one, you must ask: how well can you function inside the browser? How much do you rely on desktop software? Me? I use Skype almost everyday (although I’d love to replace that). I use Byword for composing stories. And I use YoruFukurou, a Twitter client (No, I will not use the Web interface or the Tweetdeck Web app. Yuck.). And I’m reminded even when using Google’s own Web apps – like Chat, for example – that they’re just not all up-to-snuff with the desktop alternatives. There is a Chrome Remote Desktop app now that lets you access another computer, but that’s not really a satisfying answer to the problems of Web-readiness. (The answer is HTML5, I believe.) 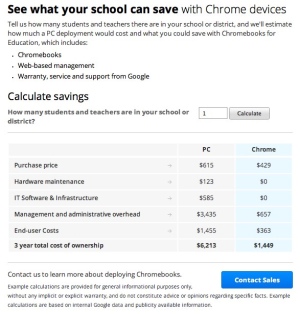 The question for most folks – schools in particular – will be whether or not all of the perks and drawbacks of Chromebooks are worth it at this price: $449 a pop for the WiFi version, $549 for one with Verizon Wireless 3G access (but just 100MB a month of data). There’s an additional $30 per device charge for schools for management and support.

All this adds up, of course, but as Google is quick to point out, it’s still cheaper than most laptop alternatives, particularly since you don’t have to worry about OS licensing or IT overhead. Is it a price that schools will go for? I’m not sure. If they’re Google Apps for Education users, if they’re looking for laptops, then it’s definitely something worth exploring.

I predicted at the beginning of the year that we’d see Google axe the Chromebooks. And even with this latest hardware and OS refresh, I’m still not sure what the future holds for the project. Google wants to make a convincing case for users to think of all its services – the Google Drive, Google Docs, Google Plus, Gmail, Search, and the Chrome browser – as inextricable from the Web. The problem, I think, is that Chrome OS and the new Chromebook still highlight all the places where we operate pretty darn well without the Web.