RIP White MacBook: The Future of Apple Computers at School

Once there was the MacBook. It was "the notebook for everyone." It was the notebook for many schools – the Apple-oriented ones, at least. But the iconic white, plastic-case devices were pulled from stores in 2011, and sales to educational institutions were discontinued earlier this year.

The decision to scrap the white MacBook followed on the heels of the redesign of another Apple notebook, the snazzier, sleaker, more metallic MacBook Air. Both the Air and the white MacBook competed for that same entry-level Apple consumer. Both sold commercially for $999. At that base price, you got a lot more bang for your buck from the heavier, clunkier MacBook: a bigger screen, more storage, more processing power, a DVD slot, an Ethernet port.

Monday at its annual developer conference, Apple unveiled updates to its Mac line. The MacBook Pro line, with retina display (ZOMG!), starts at $1199. The MacBook Air now has a faster processor (1.7 GHz), more storage (4 GB), and a USB 3.0 slot. The 11" version, still $999, is the cheapest notebook that Apple offers.

Will the MacBook Air be “the notebook for everyone”? Will it be the new mobile computing device of choice for schools?

Um... so what's the new inexpensive Mac that schools can buy? The Air? #wwdc

Nope. The new inexpensive computer for schools to buy isn't the Air.  It's the iPad.

I’m not making any shocking revelations here, of course, about the lure and the hype and the promise of the iPad. All the recent announcements that Apple has made regarding education insist otherwise. Its January education event, for example, focused on textbooks which remain – as iTextbooks at least – iOS only as the iBooks app is not available on Macs. There are over 20,000 educational apps in the App Store and along with iTunesU, that makes it one of the largest libraries of digital edu content available; and Apple readily touts the power and potential of the iPad as a learning device in its TV commercials. 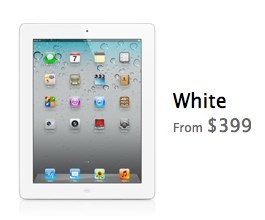 Consumers have responded accordingly, buying some 67 million iPads since their initial release in 2010. And schools are responding too. Apple says that in the second quarter of 2012, sales of iPads to schools outnumbered sales of Macs by 2 to 1, something it credits to the discounts offered educational customers (that is, $399 for an iPad 2. real world math: $399 < $999).

There was just one mention of schools in Monday's WWDC keynote. (There were a handful of mentions of “learning,” I should note, but those all involved the improved capabilities of AI assistant Siri.) It came in regards to a new feature of iOS 6 called “Guided Access" which will allow someone – presumably a parent or a teacher – to disable some of the iDevice controls, restricting a user to just certain functionalities or to just a single app.

Initially, the WWDC presentation framed Guided Access as a feature designed for those with special needs. But then Apple Senior VP Scott Forstall added, “There are a lot of schools who’ve been adopting iPads and some are starting to actually administer tests on their iPads. Well single app mode allows the teacher to lock that iPad into the test so the students can't go look up the answers in Safari.” Immediately following the keynote, Pearson announced that it would bring its online testing software TestNav to the iPad. (It's already available for Macs, Windows, and Linux machines.) THE Journal predicts a "boon for high-stakes testing" with the devices.

Will the ability to take standardized tests on iPads play a big part in that many purchasing decisions? I don't know, although sadly for many schools, testing is one of the main uses of computers -- whether desktops, laptops, or tablets. I imagine that the arguments in favor of iPads will remain the cost and the content.  But Guided Access is a good reminder of another argument -- an argument used both for and against Apple: a penchant for control. Testing joins the other ways in which the Apple brand means "closed" and "controlled."  The app ecosystem remains controlled by Apple.  You can only install apps from the App Store, for example. There's no command line on the iPad. There's no cracking open the device to repair or tinker with it (although it's worth pointing out here that it's damn tough to do that on an Air too).

And so, I miss the white MacBook already, in all its plastic clunkiness.