Hack Education Weekly News: The University of Virginia and the Future of Public Education 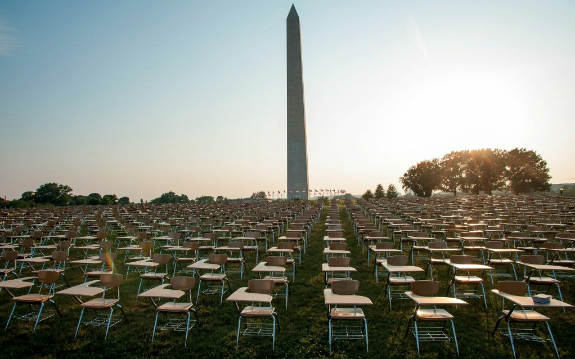 The University of Virginia has become the frontline of the battle for control over public education this week, as the fallout and outrage over the Board of Visitors’ firing of President Theresa Sullivan continues. In FOIA-ed emails, it appears as though the BOV read a couple of op-eds from David Brooks and John Chubb and decided that if the school didn’t jump on board the MOOC train right now that the “campus tsunami” was apparently going to destroy them all. Instead, it looks like they’ve done their best to destroy a public university. Good job! (And it’s worth noting that the “job” here is a result of being a political appointee a.k.a. big donor of Virginia governor Bob McDonnell).

On the campaign trail, Presidential candidate Mitt Romney has been hailing the for-profit Full Sail University as an example of a school that has managed to keep college costs under control. But according to a new site launched by the Department of Education this week, the College Affordability & Transparency Center, Full Sail University has the third highest net price for for-profit 4-year schools and is more expensive than public or private non-profit universities.

Attorneys-General in 15 states are investigating QuinStreet a California-based marketing firm that’s matching for-profit universities with military veterans who have GI Bill benefits to spend. The company runs the site GIBill.com and is being accused of misleading vets into thinking that it’s actually a governmental agency.

American education is failing, says the College Board (which as I’ve noted in the past profits handily on testing students, so I guess it would know, right?). To help draw attention to the problem, it’s launched a “Don’t Forget about Ed” campaign, timed with the Presidential election. It installed some 857 desks on the National Mall this week to highlight the number of students who drop out of high school every hour.

Last week, there were indications that Jeff Bezos and Hillary Clinton were poised to announce a Kindle Learning Initiative. But the event at the State Department was cancelled, and no word given as to why. Meanwhile, the National Federation of the Blind has sent a letter to the Secretary of State pointing out that the Kindle does not meet the needs of the blind or print disabled. “It is no excuse that a vendor has not made its product accessible.”

The Minnesota Supreme Court has upheld a ruling that says that students can be punished for their Facebook posts. In the unanimous decision, it said that it wasn’t saying that public universities can regulate students’ personal expression, but it found in this case that the student in question had violated “academic program rules that are narrowly tailored and directly related to established professional conduct standards.” The student in question was part of the University of Minnesota’s mortuary program and had posted to Facebook statements about her playing with cadavers. (Um, isn’t that the problem more than Facebook status updates? I’m no lawyer, but still…) The Chronicle has more details.

It’s the time for summer blockbusters, and among them let there be MTT2K, not to be confused – or only slightly confused with MST3K – Mystery Teacher Theatre 2000. This is actually the work of hosts Dave Coffey and John Golden who, much like the MST3K antecedent, offer a running commentary as they watch math videos. Um, the running commentary is much like MST3K. The quality of the videos they’re reviewing isn’t the same. OR IS IT? Coffey and Golden watch and respond to Khan Academy videos, and it looks like their first episode, in which they find substantial flaws with how Khan teaches the multiplication of negative numbers. Dan Meyer points out that they really need better sound equipment. And Khan Academy has yanked the original video they analyze.

LaunchPad Toys, one of my picks for the best education startups of 2011, has launched its latest app, MonkeyGram.  Look for a review tomorrow!

The Reading Rainbow app has finally arrived on the iPad. It had its official launch this week, which resulted in lots of gushing stories from tech journalists who were thrilled to spend a little time with Levar Burton. And honestly, I would be too. But I would have asked him some tough questions about how the $9.99 per month subscription fee jives with what was once the encouragement for kids to find books in their public library (you know, that place where you can read for free).

The Chronicle covers the launch of Heroes of Hat!, the first game released by Utah Game Forge, a University of Utah owned and operated company that helps students bring their video games to market. Bonus: students retain IP.

Not an official launch, but an official unveiling: Microsoft announced Surface, its new tablet. One of the features that’s caught people’s attention is its cover/keyboard. Is this feature enough to help unseat Apple’s domination of the tablet market? Price will be a key factor, but Microsoft did not reveal how much the Surface will cost nor when it will be released. “Coming soon,” which wil be too late for schools making IT decisions for the 2012–13 school year.

The American Federation of Teachers has partnered with TSL Education (the British publisher of the weekly Times Educational Supplement) to release a lesson-plan sharing website: sharemylesson.com. The site will offer free resources to teachers, and as The New York Times cites a TSL executive saying, if teachers “are here to share user-generated content, you can’t turn that into a marketplace and think you can get away with it.” Of course lots of sites do “get away with it” (what a striking way to frame that, eh?), including BetterLesson, and TeachersPayTeachers.

The Wikiotics Foundation has launched an open education campaign to build the “Last Language Textbook,” the idea being to create free, openly-licensed, and Web-based resources to replace language-learning textbooks. The campaign will start with English-language-learning resources.

I’ve been a fan of the content on iTunesU for a while, but one of the things that it’s definitely lacked is a social element. But now Stanford University’s most popular iTunes U course, iPad and iPhone Application Development will have that, thanks to a partnership between the university and Piazza, a social learning startup that lets students and teachers interact online, in real-time. Here’s hoping more classes and more universities follow suit.

In order to save money, Michigan State University will be closing thousands of alumni email accounts. The school will no longer maintain the email accounts of students who graduated over 2 years ago, which means the end to the .edu domain for about 117,000 people.

After news that several of its teen users had been approached by child predators, sexually assaulted and raped, the flirting app Skout has shut down its teen community. Only those 18+ will be able to use the app. The Wall Street Journal takes a closer look at what happened at Skout, despite the startup having lots of precautions in place to prevent this sort of thing.

Confidence in public schools has reached an all time low, finds Gallup. Just 29% of Americans say they have “a great deal” or “quite a lot” of confidence in them. It also found record low confidence in the news – 21% – who have been doing a bang-up job informing us about how schools are failing, am I right?

The GAO released a report this week comparing the ways in which charter schools and public schools address special needs students. The summary of its findings: about 11% of students enrolled in regular public schools were on special education plans in 2009–10, but just 8% of charter school students are. Cue the accusations that charter schools purposefully ignore or fail to enroll special education students. The Shanker Blog, of course, has the best insight into the study and the stats.

Some interesting statistics out of MITx, which recently wrapped up its first MOOC, 6.002x Circuits and Electronics: 154,763 students registered; 7,157 received certificates for passing the class. That’s a 5% completion rate, compared to a 14% completion rate for Stanford’s famous AI MOOC.

The Pew Center has released its latest report, this one on libraries and e-books. It found, among other things, that 58% of all library card holders say they do not know if their library provides e-book lending services. There’s a lot more in this report than this one statistic, but it certainly seems to indicate that the publishers’ claims that e-book lending at libraries is going to destroy their businesses is a wee bit of an exaggeration.

The results of a survey about higher ed’s adjunct workforce, undertaken by the Coalition on the Academic Workforce, have been released. And no big shocker here: the news is grim. half of those who answered the 2010 survey saying that their annual personal income is less than $35,000 and two-thirds saying that they make under $45,000. Inside Higher Ed has more details.

UniversityNow has raised $17.5 million for its for-profit university.  Read more from me about this school and its business model here.

The Gates Foundation announced $9 million in grants to “support breakthrough learning models in higher education.” That includes $1 million to edX, because apparently the $30 million apiece from Harvard and MIT wasn’t enough, eh?

A hearty congrats to GlueJar which has successfully unglued its first book, Oral Literature in Africa. The title will now be made available in an openly licensed digital format, thanks to GlueJar’s crowdfunding platform, Unglue.it. (My post on the site’s launch is here.)

This is actually an end-of-funding story: Phil Hill analyzes the University of Michigan and Indiana University’s decision to pause their investments in the open source LMS, the Sakai Open Academic Environment. While Hill argues that, on the surface at least, the decision won’t change much, he does wonder what the future holds for Sakai Project.

Former NYC school chancellor Joel Klein is getting back to work focusing on the education-side of the News Corp business, wrapping up his duties as the internal investigator on the company’s phone hacking scandal.