LaunchPad Toys has released its latest app, MonkeyGram (iTunes link) – a follow-up to its popular Toontastic storytelling app. One indication that popularity: some 300,000 Toontastic cartoons are created every month.

That usage has given the folks at Launchpad a lot of data to see what kids are doing: the kinds of stories they create and share. But as co-founder Andy Russell observed – not surprisingly – older kids use the app differently. They tell different stories. Arguably, they tell better stories. They create characters that they use repeatedly, creating not just a one-off cartoon but a whole series.

But once they’re teens, their interest in creating the Toontastic cartoons seems to decline. They aren’t interested in using the iPad app for this (adults and teens seem to prefer the web app). And they’re less likely to upload their creations to what's seen as a "kids’ site." According to Russell, “their storytelling is different” too.

The teens are more interested in messaging, he suggests, than what we traditionally think of as storytelling. They want to share those stories/messages with their friends on Facebook, but they want to share privately too, via text-messaging. They use emoticons and text-speak. And unlike the more imaginary stories told by younger kids, the kinds that teens tell tend to involve their friends, rather than fictitious characters – “real friends, plus zombies,” Russell adds.

LaunchPad Toys has taken all this into consideration with the new MonkeyGram app. Like Toontastic, you can create animated cartoons by picking a background, adding characters and recording your voice as you move the characters around on the screen. But MonkeyGram is akin to a postcard than the more elaborate stories made with Toontastic. You can use your own photos as a backdrop and you can also pull in friends’ photos to replace the cartoons’ faces. Once you’ve made the postcard, you can then share it with others. (The recipients get a link that opens a dedicated player for the animation.) 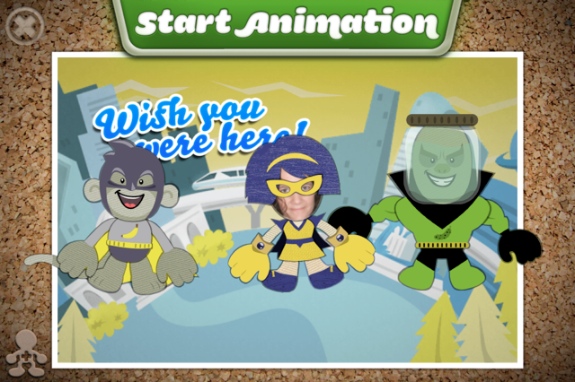 Because of the Faecbook integration (I think), the app says that “users must be older than 13 to share cartoons with MonkeyGram.” That makes the age-appropriateness of MonkeyGram a little hard to figure out. It seems well-suited for the tween crowd. I do think young teen girls will like it.

Those teen girls are, of course, the most avid text messagers, and it’s interesting to think about how we recognize (or fail to recognize) the ways in which teens communicate digitally, how we ask kids to conform to our expectations of storytelling. According to Russell, the idea of MonkeyGram was in part to give a basic framework for a creative form for messaging and then “get out of kids' way.”