News Corp Rebrands Its Education Division, But Is It Enough for Schools to Trust It?

News Corp and Education: Some Background 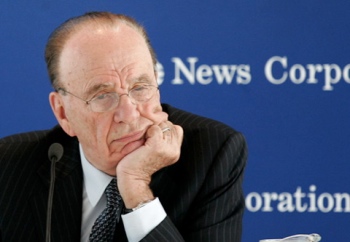 Rupert Murdoch’s News Corp made two important acquisitions in November 2010: paying $360 million for a 90% stake in the educational content/assessment company Wireless Generation and hiring New York City Schools Chancellor Joel Klein. These were the first signs that News Corp was making a foray – clearly a political and a technological one – into the education sector. But there were plenty of questions about what exactly the publishing/news company had in mind .

Since then, News Corp has made a few more moves, including hiring Diana Rhoten, the co-founder of education startup accelerator Startl, teaming up with the College Board to make education an important issue in the 2012 Presidential campaign, and sending Murdoch and Klein to speak at various events about the “failures” of the current education system and the promises of technology to fix things.

Whatever the company’s plans might have been, they were sidetracked in 2011 by the phone hacking scandal at its News of the World tabloid – revelations that the paper had hacked into phones of politicians, celebrities, and British citizens.

Joel Klein set aside his leadership over the company’s new education division to lead the internal investigation. (British prosecutors filed charges against 8 of the organization’s editors yesterday.) The New York state comptroller yanked a no-bid contract that had been granted to Wireless Generation, citing its association with News Corp following the phone hacking scandal. (The state did not, however, sever ties for the contract given to the Shared Learning Collaborative, a Gates Foundation-funded initiative for a nation-wide educational data infrastructure with software built by Wireless Generation. New York City is one of the pilot districts for that project.)

Despite what looks to be an ongoing criminal proceeding against News Corp, the company hopes that its announcement late last month to split the company in two will help assuage fears about its ethics and its future. One company would focus on the newspaper and publishing business (including The Wall Street Journal and HarperCollins); the other on entertainment (including Fox News). And yesterday News Corp unveiled the new brand for its newly formed education division: Amplify.

Klein will be CEO. Rhoten, CSO. The rest of Wireless Generation’s management is listed on the new company website as “the team.” 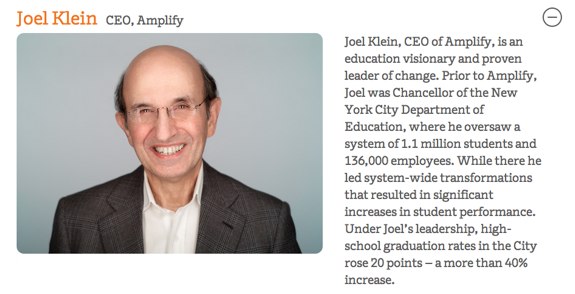 News Corp and Education: Some Analysis

Amplify will offer digital learning tools for the K through 12 market and will focus on three areas: assessments and learning analytics, digital curriculum (Common Core-aligned content for math, language arts and science), and content delivery.

There isn’t a product – hardware or software – to hold and evaluate yet, but according to yesterday’s press release, Amplify is building a “breakthrough, 4G mobile tablet-based platform” in collaboration with AT&T. A pilot program will run in “schools across the country” during the 2012–2013 school year. (4G lets students use tablets at home even if they don't have WiFi there; it also allows schools to filter and monitor their Internet access, per CIPA.) 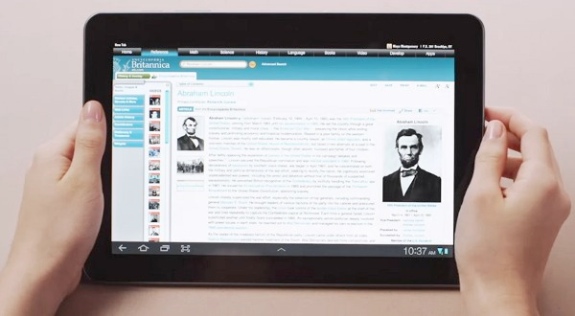 According to the demo videos on the Amplify website, the tablets in question look a lot like the Galaxy Tab, the Samsung Android tablet that’s currently facing a ban in the US due to a patent lawsuit from Apple. Because of this, it’s hard to say what the actual hardware will look like when the pilot programs launch this fall. Could be a Windows device.  Could be Android.  Could be iPads... All devices make brief appearances in the promotional videos (something that leads me to think what we really have here is vaporware.)

Well, actually the tablets are unlikely to be iPads as the operating system that Amplify touts seems to be specifically designed to comprehensively track student data, interactions, purchases, assignments and so on – something that the consumer-oriented iPad just doesn’t do (or rather, it doesn’t do for schools). Furthermore, Apple has its own content ecosystem, one to which many textbook publishers and app makers have already flocked.

That’s just one of the areas in which Amplify will have to battle – it’s Amplify versus Apple the hardware maker, and Amplify versus the Apple app ecosystem. It’s also Amplify versus other content providers – Pearson, McGraw Hill and so on – many of whom also have their own systems that connect digital content to learning analytics. And it’s Amplify, Wireless Generation and what it describes as its “proprietary technology” versus an increasing demand for open educational content and (I wish) open source and interoperable hardware and software.

But the most challenging uphill battle that Amplify may face is separating itself from the stigma of News Corp – Ruper Murdoch, the political bent of Fox News, and of course, the phone hacking scandal. How will schools, teachers, parents and students feel about News Corp’s entrance into analytics, assessment, and curriculum? Will the re-branding be enough to make people forget those connections?

Image credits: The Inquisitor and Engadget