On Tuesday Apple issued its quarterly report, one that analysts are describing as “lackluster, ”disappointing,“ and a ”reality check“ – all despite $35 billion in revenue and $8.8 billion in profit. The company ”only" grew by 23%, its slowest since Q3 of 2009. The reason, in part: consumers may be holding off on purchasing new iPhones (sales fell 26% from the previous quarter). Also down: revenue from the iTunes App Store (off $100 million from Q2).

iPad sales, however, remain strong, and Apple was able to tout the number of iPads sold to schools – some 1 million iPads last quarter alone. As it noted with its second quarter results, Apple is now selling 2 iPads for every one Mac to US K–12 customers. According to CEO Tim Cook, the rapid adoption of the devices is “unlike anything I’ve seen in technology.”

The sales of Macs to schools also hit at an all time high last quarter, which despite all the hype about iPads and iPad sales is fairly noteworthy. After all, iPads are frequently bought for one-to-one programs, while that isn’t necessarily the case with Macs. (Apple pointed to a purchase of 11,000 iPads by the Mansfield School District in Texas, for example, which plans to give every high school student and teacher a device.) And iPads are cheaper too – the iPad 2 is sold at a discounted $399 to schools, as opposed to the lowest price MacBook – the Air – which starts at $999. (RIP white MacBook.) The boost in Mac sales points to the ripple effect from the iPad’s popularity: schools are investing in Apple hardware; schools are investing in the Apple ecosystem.

A nod to that was the release today of an update to its iTunes U app (iTunes link). The app, which was initially launched at Apple’s big education event earlier this year, now allows any teacher to create their own private courses, pulling together links, audio, video, text, and app materials (again most of that from within the Apple ecosystem) through a browser-base course manager and inviting select students to participate. (Teachers do still need to go through Apple’s verification process to make these courses public.) 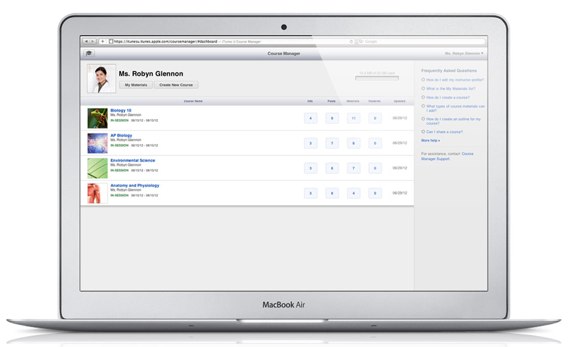 Apple also added an improved note-taking features to iTunes U making it easier to sync notes with specific, timestamped places in video and audio content.

I’ve long called iTunes U one of the great undiscovered gems of the iTunes store as it hardly receives as much hype and attention as the slew of third party educational apps therein. “The world’s largest catalog of free educational content,” iTunes U boasts over 500,000 lectures, videos, and resources. But even with the update to the app, there’s still a lot of room for improvement here, particularly when it comes to what many people see as Apple’s Achilles Heel: “social.” There still isn’t a way for teachers to interact with their students via iTunes U nor for students to interact with each other.

It’s content delivery – “course distribution” according to the website – plain and simple. It’s not very social; not very hackable; not very remixable – much like the Apple products themselves.

Nevertheless, it’s all incredibly appealing to schools it seems, who last quarter bought one out of every 17 iPads sold and who are certainly helping Apple retain its status as not just a leading consumer electronics company, but as one of the leaders in education technology.