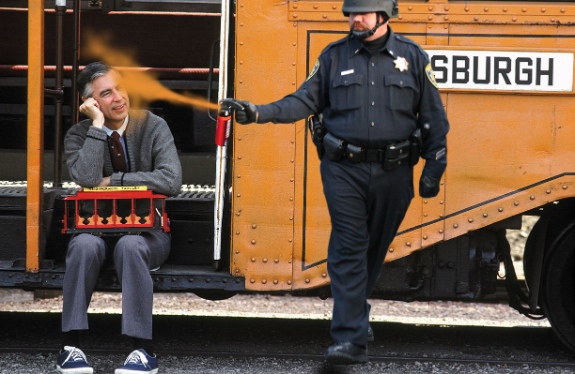 Adios to UC Davis’s Lieutenant John Pike of pepper-spraying infamy. Pike has been on paid administrative leave since last November when he attacked non-violent protestors on campus. (His 2010 salary was $110,243.12.) The school announced this week that Pike is no longer an employee, although it declined to comment on whether Pike had been fired or had left on his own accord.

On Monday, Senator Tom Harkin released a report some two years in the making, investigating for-profit colleges. And it’s pretty damning. Among its findings: in 2010, the for-profits it studied had a total of 32,496 recruiters, but only 3,512 career-services staff members. 22.4% of these companies’ revenue went to marketing and recruiting, 19.4% to profits and just 17.7% to instruction. Their CEOs were paid an average of $7.3 million. The vast majority of these companies’ revenue came from taxpayers in the form of federal financial aid, and because of the way in which the GI Bill works (mo’ money for colleges), these for-profits aggressively marketed their schools to vets. The Apollo Group, which operates the University of Phoenix, the largest for-profit college, got $1.2 billion in Pell grants and $210 million more in benefits under the Post–9–11 GI Bill. Two-thirds of Apollo’s associate-degree students leave before earning their degree.

Thank goodness that the Cybersecurity Act of 2012 has died in the Senate. Because among its provisions would be making it a federal offense to violate a company’s Terms of Service. So yeah, all those kids who’ve lied about their age in order to access Facebook…

Mexico’s President-Elect Enrique Peña Nieto has promised to create a National Digital University, reports Tony Bates, as part of his goal to raise the country’s university participation to 50%.

George Mason University’s Center for History and New Media has released another tool (in its long line of awesome tools, I should note here): Scripto. The open source Scripto makes it easier for archives and collections to solicit community help in transcribing materials.

The Chronicle of Higher Education notes that when World Education University opens this fall it will offer free content via an ad-supported model. “Any Silicon Valley start-up will tell you that if you can drive enough eyeballs to your Web site, you can find ways to leverage that and monetize it,” said Scott Hines, the university’s CEO. Right. Let’s look at the stock market and see how well that’s going: Facebook shares, down. AOL, down. Yahoo, down. But hey, good luck with that business model, World Education University! (And good luck getting accreditation too.)

The interactive e-book company Inkling has released version 3.0 of its app, bringing its catalog of textbooks to the iPhone and iPod Touch. (The company also has an HTML5 version too.) The iPhone app, which syncs reading across all your devices, only downloads one chapter at a time so that the files don’t take up all your free disk space.

DIY.org, the makerspace network and showcase for kids, has added a new feature so that kids can highlight their skills. (I love the Fort Builder skill, personally.)

SnappSchool, one of the many startups founded last year to focus on text-messaging between school and home, is shutting down its SMS functionality to focus on its homework help service for parents (which I covered here).

Last week, I noted that Singularity University is looking to move from non-profit to for-profit status. And now, the plot thickens. Wired notes that the university is also seeking more control over its students’ IP. Bad news for students. Bad news for openness and innovation.

FounderDating, a matchmaking service for entrepreneurs looking for co-founders, is teaming up with Teach for America to help pair up those interested in education entrepreneurship. There’s an application and screening fee for FounderDating, which promises its network has folks with industry and technical expertise.

The online study group website OpenStudy has just launched Catapult, a cash-based reward system that PandoDaily calls a “Kickstarter for education goals.” Citing Roland Fryer’s study on paying students to perform well in school… well… it just made me sad as I’ve been a fan of this startup for a long time.

The New Teacher Project (founded by former DC schools chief Michelle Rhee) released a report this week called The Irreplaceables, finding that some of the best teachers leave the profession every year. As The Shanker Blog notes, it’s a good thing that this report highlights the problem of teacher retention. But as it also notes, much of this study is only based on one year of data, so it is awfully hard to make sweeping pronouncements about who’s “good” and who’s “bad” and who’s “effective.”

Those pesky education researchers! Look what UT Austin professor Walter Stroup thinks he’s found: that there are serious flaws in the ways in which we use standardized tests to measure student achievement and predict student performance. Oops!

According to a new survey by the National Consumer Law Center finds that of the students that default on student loans, 80% are unemployed, 65% attended for-profit universities, and less than 47% actually completed their degrees. (via Inside Higher Ed)

The Pew Research Center has released the results of a survey it conducted with some 1000 “experts and stakeholders” on their thoughts about the future of higher education. What will higher ed look like in 2020? 39% said it won’t be much different than it is today. 60% said it would be “quite different.” It doesn’t look like anyone in the survey mentions jet packs, proof that professors really just aren’t forward-thinking at all.

According to data from the Department of Education, of 3.5 million kindergarteners enrolled in school during the 2010–11 school year, 25% came from families living below the poverty level.

Educational game-maker MindSnacks has raised $6.5 million and boasts that its games have been downloaded over 4 million times. MindSnacks now has 14 titles for language-learning and test-prep all aimed, as the name of the company suggests, on “bite-sized” study portions.

MIT OpenCourseWare continues to expand its OCW Scholar courses with the announcement this week that Introduction to Psychology is now available in this format. (For more on OCW Scholar, see this story from January.)

The “Panel Picker” is now open for the 2013 SXSWedu. You have a little over a month to submit your session. (Me, I’m considering pulling together a panel on “open-washing” in education – in open-source, in open content, in MOOCs, and in other areas that have the adjective “open” but aren’t. Interested? Lemme know.)