6.003z: A Learner-Created MOOC Spins Out of MITx

It’s hard to not see Stanford University as the leading force in a lot of the recent MOOC-related buzz; or at least that’s the story that Stanford and its startup spin-outs tell. That’s put MIT in the role of catch-up, arguably, even though the university was a trailblazer in earlier open courseware efforts.

Despite partnerships with Harvard and Berkeley and over $60 million in funding, MIT’s MOOC initiative MITx has only offered one class since its launch – 6.002x, Circuits and Electronics. That course is a foundational one at MIT, required for all undergraduates in the electrical engineering and computer science programs. But only 7000 students successfully completed the class – a completion rate of about 5% (compared to a 14% completion rate for Stanford’s AI class).

6.003z is the creation of Amol Bhave, a 17-year-old high school student from Jabalpur, India who was disappointed to learn that MITx had no plans to offer the follow-up class to 6.002x. Typically, the next class students take at MIT is 6.003, Signals and Systems. So Bhave took matters into his own hands, creating his own open online course with help from two other members of the 6.002 learning community – a class based on a blend of MIT OpenCourseWare and student-created materials. 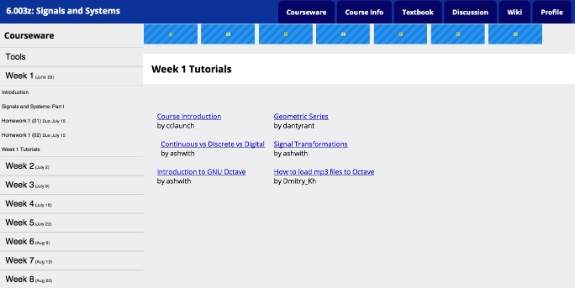 At the heart of 6.003z are the video-taped lectures from Professor Alan Oppenheim (who arguably boasts one of the best mustaches in Eighties educational video – something which does, of course, prompt me to point out once again that this format is not new). But in addition to the videos and the other MIT OCW materials, Bhave and others have created tutorials specifically for this 6.003z class.

The creation of 6.003z is a triumph of the recent MOOCs, I’d argue, because it showcases learners building and creating their own knowledge, their own websites, their own technologies – not restricted to a single platform or institution or curriculum-map or major. (About 800 students signed up for 6.003z, and Bhave says that about 300 completed the weekly assignments. He's planning on offering more classes too.)

I fear too that too often we forget that the O in MOOC should mean more than just “open enrollment.” 6.003z was possible because of the openly licensed materials that MIT has made available – materials that students don’t just read or consume but that they are free to remix as well. And 6.003z points to a growing ecosystem for open learning, one that learners and not just institutions should be free to organize.