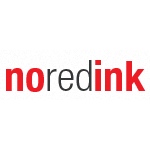 High school teacher Jeff Scheur tells a pretty familiar story for anyone who’s taught writing: you spend a lot of time grading essays, doing your best to provide personalized feedback on what the students are saying and even how they’re saying it. But that feedback can often be overwhelming to students – all the comments and circles and “red ink” – and it’s sometimes difficult for students to figure out how to improve.

That’s particularly true when it comes to providing feedback on their writing mechanics, Scheur contends. Grammar, punctuation, and spelling –they’re all fundamental to clear communication and good writing, but they’re something many teachers spend less and less time on in class.

So in his spare time, Scheur created NoRedInk, a website to help students practice and review their grammar. In order to make this process a little less onerous, Scheur lets teachers and students personalize the practice assignments and quizzes with the names of their favorite bands, sports teams, movie or TV stars and friends.

NoRedInk also adjusts the questions based on what students get right or wrong and shows tutorials if students get stuck. And as Scheur argues, it’s important that “kids learn to fix their own sentences” – something that’s led him to steer clear of multiple choice exercises. Instead, students have to type the correct answer or drag-and-drop the right punctuation.

The website also offers a dashboard for students as well as teachers to track progress on individual skill areas.

NoRedInk is currently a one-man-gig (Scheur is looking for a technical co-founder), but that hasn’t stopped him from getting well over 4500 teachers to sign up since the site went live in March. NoRedInk is free to use for now – “at least for this semester,” says Scheur. The startup is part of the current cohort at ImagineK12, the education incubator in Palo Alto, California.

Grammar and the Common Core

There's been a lot of talk recently that the Common Core State Standards are going to be a "boon" to the education industry, and when Scheur and I chatted last week, we talked briefly about what this would mean for his startup.  (He gets bonus points in my book for dismissing the notion of claiming that NoRedInk was "Common Core-aligned."  Scheur's motivation here comes from his work as a teacher, I think, and less as a CCSS-bandwagoneer.)

Out of curiosity, I did some very basic “CTRL-F” research in the Common Core State Standards (PDF) this afternoon, looking for guidance, guidelines, and well, standards about the teaching of what I’d call the “mechanics” of writing. By that, I mean grammar and punctuation mostly – the mechanics of how you assemble letters, words, and phrases in way that conform to the norms of formal writing. Here’s what I found, based solely on the frequency of key words:

Of course, you can only glean so much based on the number of times the CCSS mention “apostrophes” and the like. But my sense is that the Common Core doesn’t really focus much on the mechanics. (By comparison, “analysis” is mentioned 57 times; “creativity,” none.) The standards do say that students must “demonstrate command of the conventions of standard English grammar and usage when writing or speaking,” and there are certain grade-levels attached to certain skills. 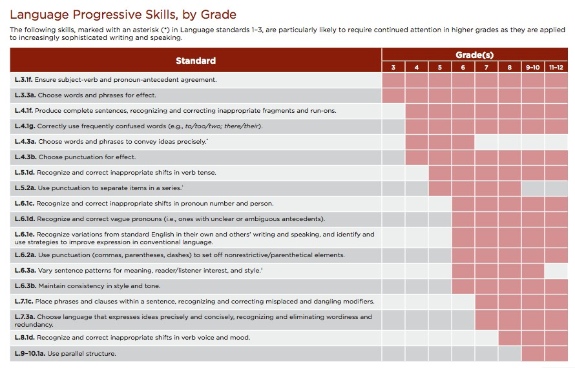 You pick some of this up when and if you read a lot and read a wide variety of genres. You pick some of it up when you write extensively, and again when you experiment with different forms, styles and with your own voice.

But what if we neglect grammar at the K–12 level and continue to neglect it in college?

A recent article in the Harvard Business Review states things pretty bluntly: “I won’t hire people who use poor grammar.”

“Grammar is relevant for all companies,” writes iFixit and Dozuki co-founder Kyle Wiens.

“Yes, language is constantly changing, but that doesn’t make grammar unimportant. Good grammar is credibility, especially on the internet. In blog posts, on Facebook statuses, in e-mails, and on company websites, your words are all you have. They are a projection of you in your physical absence. And, for better or worse, people judge you if you can’t tell the difference between their, there, and they’re.”

Students will be judged, whether it's by the Common Core assessments or by future employers or by those who read their Facebook status updates. So in addition to NoRedInk, here are some other grammar-related resources.