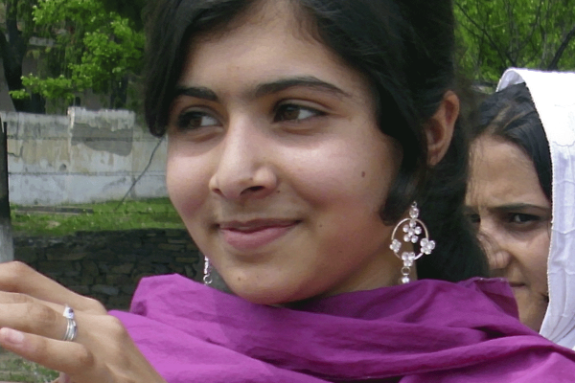 The Pakistani Taliban has claimed responsibility for the shooting of 14-year-old Malala Yousafzai. Malala has been an outspoken advocate for girls’ rights to education, blogging for the BBC about the growing influence of the Taliban in her hometown of Mingora. Malala was shot in the head and neck while on the bus on her way home from school this week. She remains in critical condition.

The CEO of the Chicago Public Schools, Jean-Claude Brizard, is out after only 17 months on the job. Brizard was hired by Rahm Emanuel to help push through the mayor’s education agenda — an agenda which culminated in the recent teachers’ strike.

The Supreme Court heard arguments this week about affirmative action and college admissions. The case, Fisher v University of Texas, stems from a white woman’s lawsuit that she was discriminated against and denied admission to the university because of her race. The decision is expected next year and could have a major impact on college admissions processes.

A huge victory for universities this week as a federal judge threw out a lawsuit against the University of California, University of Wisconsin, Indiana University, Cornell University and University of Michigan by the Authors Guild who had claimed copyright infringement for scanning and digitizing books (with Google’s help) as part of the Hathi Trust. Judge Harold Baer said that the universities had a fair use defense in doing so. Read more about the decision in Wired.

A federal judge sentenced Lorenzo Garcia, the former superintendent of the El Paso Independent School District, to three and a half years in prison for his role in a conspiracy to fraudulently improve the district’s test scores by prevent students predicted to score poorly from taking the required NCLB assessments.

Education historian Diane Ravitch has posted on her a blog a list of the financial contributors to the campaign in Washington State to legalize charter schools (a measure that voters have rejected twice in the past). The big donations come from Bill Gates and the Bezos family (the parents of Jeff Bezos, Amazon CEO).

Go Go Games’ iPad game for kids with autism arrived in the iTunes App Store this week (iTunes link). I met the founding team earlier this year at Stanford’s LDT Expo, and I’ll repeat what I said then: this is an incredibly thoughtfully designed game.

Education Week’s Jason Tomassini interviews the newly appointed CEO of Promethean, Jim Marshall, who says that the company is considering open-sourcing its platform in order to help counteract what has been a downward spiral for the interactive whiteboard-maker's profits.

College enrollment dropped last year, according to the Department of Education. About 18.62 million undergraduates were enrolled in colleges and universities in 2011, down from 18.65 million in 2010.

According to a recent survey by Piper Jaffray, 40% of American teens own an iPhone (up from 34% this spring), and 62% say they plan to buy an iPhone (for whatever that’s worth).

PandoDaily reports that CourseHorse, a New York-based startup that offers a directory of offline classes, has raised $500,000.

Thomson Reuters has acquired the e-learning business Knowledge Platform, which provides risk and compliance learning programs for financial businesses in Asia and the Middle East.

The University of Texas, Austin will pilot a program next year it hopes will boost graduation rates by offering to forgive some of the the student loans of those who can graduate in a four year time period.

Cardale Jones, a quarterback at Ohio State University tweeted last week that college athletes shouldn’t have academic requirements. “Why should we have to go to class if we came here to play FOOTBALL, we ain’t come to play SCHOOL classes are POINTLESS.” He later deleted his tweet, and the university suspended him for one game.

Congratulations to all the Nobel Prize winners announced this week. And a special shout-out to Sir John Gurdon who won the prize in medicine this week and noted that his biology teacher in school (Eton College namely) said on his school report that his plans to study biology and become a scientist would be a “sheer waste of time.”