In May, I decided to re-institute a new monthly feature here, something that I used to write for MindShift: a post highlighting some of the new and updated educational apps that have been released over the past 30 days or so. I’m not sure if it’s worth continuing, frankly, as each month that goes by, I seem to choose fewer and fewer apps to feature. Clearly this isn’t an exhaustive list of all the new educational apps. Clearly. It’s just the one that I thought was the most exciting. 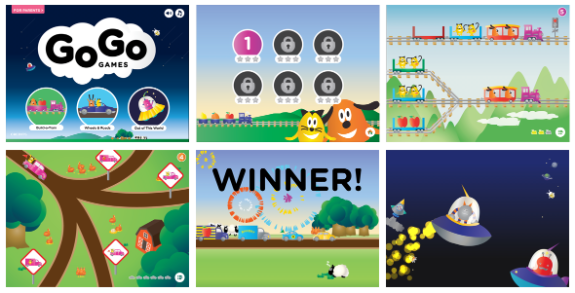 Go Go Games was among my favorites when I first saw Stanford grad students and startup founders Joy Wong Daniels, Alexis Hiniker, and Heidi Williamson demo it at the LDT Expo back in August. The iPad app made its official debut in the iTunes Store this month, and so let me echo what I wrote back then: “Wow. This is a project to keep an eye on, and when Go Go Games comes to the iTunes Store (soon, say the team), I’d heartily recommend this app to all families, not just those with autistic children.” So here you have it: my hearty recommendation.

Go Go Games is designed to support elementary and preschool age children with autism, as I noted back in August: “Incredibly thoughtful game design.” The app offers a series of games — Build-A-Train, Wheels & Roads, and Out of this World — that all utilize Pivotal Response Theory to help children build up the perception skills necessary to play a matching game. That perceptual capability is something essential to learning but incredibly challenging to children with Autism, and helping develop that unlocks many other learning possibilities.

“We designed the game to feel more like play but work like therapy,” says co-founder Alexis Hiniker — that is, reinforcing and enhancing the behavioral therapy that many Autistic children already receive through the way in which many of them also tend to spend their free time: playing video games. And the app’s game mechanics are both thoughtful and fun, with a wonderfully designed UI and wonderfully drawn characters to boot.

The app has already received rave reviews during its development from parents and teachers and has also earned a 5-star rating from Common Sense Media.