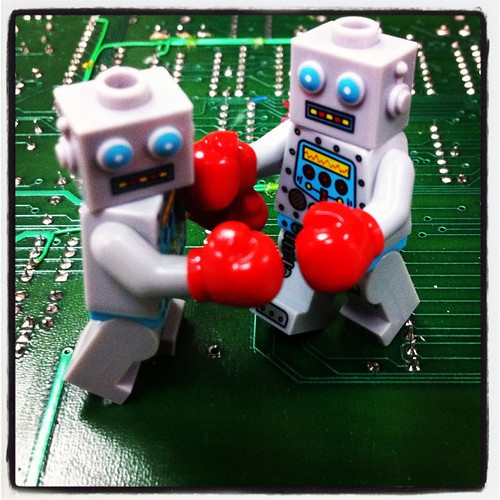 Happy 30th anniversary to A Nation at Risk, and congratulations to all the reformers who’ve managed to maintain the chant that “schools are broken” with such steady determination for three decades!

A new bill proposed in the California state legislature would create a fourth division of the state’s higher education system. According to The Chronicle of Higher Education, it would establish the “New University of California,” “an institution with no faculty and no tuition that, like the University of California, would be governed by a board of 11 trustees and one chancellor.” No teachers. Lots of administrators. Sounds like a revolution to me.

The North Carolina State House voted unanimously this week to require elementary students be taught cursive and memorize their multiplication tables. The sponsor of the bill said that cursive is "a skill that’s needed in the larger world and is thought to be a requirement for a well-rounded educated person.”

Oregon governor John Kitzhaber signed into law this week a bill that grants in-state tuition to undocumented Oregon high school graduates. Eligible students must have attended school in the US for at least five years; studied at an Oregon high school for at least three years, and graduated; and show intention to become a U.S. citizen or lawful permanent resident.

Great headline from the Electronic Frontier Foundation highlighting the Computer Fraud and Abuse Act, a piece of legislation that’s been used by the Department of Justice to prosecute folks like Aaron Swartz. According to some interpretations, violating a website’s Terms of Service is a crime. Hence the headline: “Are You A Teenager Who Reads News Online? According to the Justice Department, You May Be a Criminal.” After all, many news sites state in their TOS that they cannot be used by those under 18.

Check out Episode 1 of Adafruit’s new science series for kids, Circuit Playground. Adafruit Industries is a DIY electronics marketplace. Founder “Ladyada” Limor Fried is featured in the first video — “A is for Ampere” — along with a friendly robot Adabot.

The open-access publishing startup Unglue.it (one of my picks for the best education startups of 2012) announced this week that textbook publisher De Gruyter will offer 100 of its titles on the crowdfunding platform. Books that raise $2100 will be “unglued” — released in a DRM-free digital format under a Creative Commons license.

Texas high school student Kyron Birdine was suspended this week for writing YOLO on a state-mandated standardized test and tweeting about it. As Gawker reports, Birdine and his peers “are being forced to take both the new State of Texas Assessments of Academic Readiness (STAAR) test and the old Texas Assessment of Knowledge and Skills (TAKS) test, even though only the TAKS will count.”

Stanford isn’t joining edX, but it is planning to work with the MOOC initiative on the code-base for the edX platform. EdX announced this week its timeline for open-sourcing that platform (June 1), and Stanford says it will contribute features from its Class2Go platform. Among the projects that will be open-sourced: code for the edX LMS; Studio, a course authoring tool; xBlock, an API for integrating third-party learning objects; and machine grading API’s.

George Mason University history professor Mills Kelly will no longer offer his infamous “Lying About the Past” course after a undergraduate committee rejected a proposal to make the course part of the history department’s core curriculum. “Lying About the Past” has received a lot of notoriety as one of the projects involved students creating a historical hoax and releasing it online (for example, via a Wikipedia entry). That made Jimmy Wales angry. And no one likes Jimmy Wales when he’s angry…

Phoenix College math instructor James Sousa has posted some 2,600 video tutorials online, all under a CC BY-NC-SA license. Sousa, who has been teaching math for 15+ years, has posted all the work on YouTube as well as on MyOpenMath.com. More details via the Creative Commons blog.

The reference and information services company Credo has acquired OnlineTutorSolutions.com, which the company contends will help it boost its services by connecting “students to on-staff, state-certified tutors at their point of need.”

The Australian textbook startup Zookal has raised $1.2 million in funding. Zookal buys university textbooks, then rents them to students.

Hires and Fires and Other HR News

No, McDonalds is not requiring cashiers to have a Bachelors Degree. Reports to that effect circulated this week, coinciding quite nicely with the narrative that college degrees are oversold. The AP clarifies that a third party job search site added the requirements, not the fast food giant.

Rutgers University has fired its basketball coach Mike Rice after video surfaced of him physically and verbally abusing his players — shoving them, throwing basketballs at them, calling them gay slurs. The team’s assistant coach has resigned, the university’s athletic director is out too, and there are rumors that the Rutgers president might be the next to go.

But in some awesome Rutgers news, Joyce Valenza — blogger, librarian, champion of kids’ digital literacy, and all around nice person — is joining the faculty of the university’s School of Communication and Information.

Techcrunch reports that “Aardvark Co-Founder Max Ventilla Departs Google To Read A Lot Of Books On Education.” The Q&A site Aardvark was acquired by Google in 2010. And apparently, based on a photo that his wife posted to Twitter, Ventilla is reading about education. Journalism.

President Obama has proposed a new $100 million initiative — the Brain Research Through Advancing Innovative Neurotechnologies, or BRAIN for short. Pretty clever, huh. The plan is to map the human brain. Many scientists are non-plussed.

The data journalists at The Guardian have launched the US Student Debt Project, a series on… well… US student debt. Drilling down into the data is important as many people throw around numbers without much thought or criticism: take for example the difference between the average student loan debt owed in the US ($24,301) — this is the number you hear most folks cite — and the size of the median student loan debt in the US ($13,600). And all those students who are saddled with “hundreds of thousands in student loan debt”? Just 3% of borrowers take out more than $100,000 in loans. Debt still sucks though. Trust me. I know.

UC Irvine, Cal State Fullerton and Chapman University will pay $275,000 apiece to the OC Register for “a half-page ad in each of 45 sections over the next year, along with feature stories, events coverage, personality profiles and other light fare produced by Register staffers.”

In other totally non-biased education news, tune in all month for a special series on online education in the pages of PandoDaily — sponsored by the venture capital firm Accel Partners. “Education is broken,” writes founder Sarah Lacey, so her tech blog is going to “dig deep” into the online education trend. Wheee!