Sorry for the delay in posting this round-up of the week’s education news. I spent the week in Maine with family (my mom turned 70), with limited access to the Internet. As always, you can stay up on the blogs that I’m reading, via the News Elsewhere tab above or via this site’s “firehose” Twitter account. 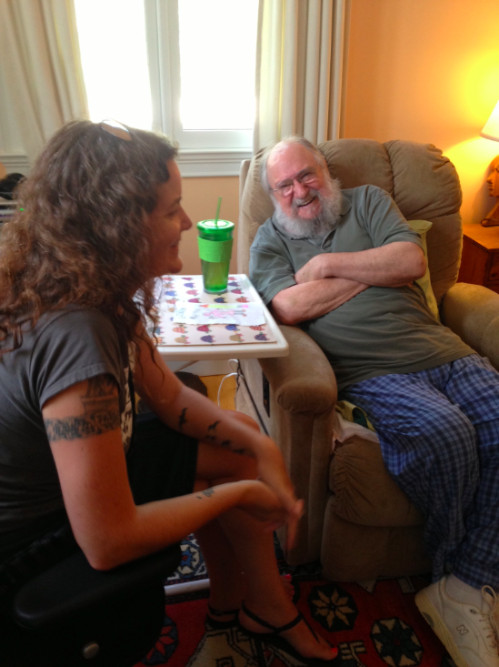 While in Maine I was also incredibly fortunate to spend an afternoon with my hero Seymour Papert. I shared with him not just the outline of my book, Teaching Machines, but also my review unit of the latest LEGO Mindstorms. Write-up forthcoming…

The Partnership for Assessment of Readiness for College and Careers (PARCC) unveiled the costs of its Common Core tests in math and language arts this week: $29.50 per student. That’s more than what half of its member states are currently paying for standardized testing. More details via Ed Week’s Catherine Gewertz, who also looks at the price tag for the other testing consortium’s tests. She notes that PARCC “seeks to make the point that $29.50 isn’t a lot to spend on a test, noting that it’s about the same as ’a movie date”’ or ‘dinner for four at a fast-food restaurant,’" which isn’t exactly the analogy I think works best for arguing how we should spend education dollars, but what do I know.

Georgia became the latest state to back out of PARCC.

The Miami Dade Library System will close nearly half its branches due to budget shortfalls. And hey, good luck potential Presidential candidates from Florida running on an education platform!

The USA Today reports that members of the House Education Committee are on the receiving end of a upswing in campaign donations from for-profit universities. (And in related news, committee members have put forward the “Supporting Academic Freedom through Regulatory Relief Act,” which will stop the Obama Administration from cutting off federal aid to schools with high graduate debt and low repayment ratios.)

The North Carolina legislature reached a budget deal that would allow school vouchers beginning in 2014, that would end teacher tenure in the state, and that earmarks $5.1 million for Teach For America.

The Chicago School District is laying off 2000+ employees, including about 1000 teachers.

Politico has launched a new “pro” education vertical with some awesome education journalists, including former Inside Higher Ed reporter Libby Nelson and former Reuters reporter Stephanie Simon. No word yet on the subscription price for the new service, which offers a daily round-up of education-related news, as well as more in-depth coverage.

Google announced it has partnered with Pearson, Wiley, Macmillian Higher Education, McGraw-Hill and Cengage Learning and will be bringing textbooks to its Google Play store next month. Wheeee.

As part of Phase 1 of its recently signed deal with Apple, the Los Angeles Unified School District, will begin handing out iPads to students this fall, with all 640,000 students to receive the devices by the end of 2014. Wheeee.

The Knight Center for Journalism in the Americas is offering a MOOC on data journalism, beginning August 12.

7 Indian Institutes of Technology and a number of IT firms, including Infosys and Cognizant, are teaming up to offer MOOCs.

Be sure to tune in to the WCET blog in the coming weeks for details on how ACE (the American COuncil on Education) has assessed five Coursera courses. (Kudos to Pat Book, ACE’s former Assistant Vice President, for authoring the posts and for encouraging this level of transparency about the accreditation process.)

The Minerva Project, a for-profit education startup that says it aims to be a new “Ivy,” has partnered with Keck Graduate Institute and will launch the Minerva Schools at KGI with the first class matriculating in the fall of 2015. (I covered the school’s initial funding back in 2012 here.)

Sports Illustrated reports that the Pac–12 conference’s presidents have sent a letter to the NCAA asking it to “engage in further, careful consideration” before allowing for-profit universities to become Division I members. While this issue is under consideration, the schools say they will not schedule games against for-profit (new Division I member) Grand Canyon University. Of course, it’s difficult to argue that college sports aren’t a hugely profitable business, so the sneering at Grand Canyon University is a little rich.

Language-learning giant Rosetta Stone has acquired Boston-based startup Lexia Learning for $22.5 million. Lexia Learning makes literacy software, so it looks as though Rosetta Stone might be returning to its pre-airport-kiosk roots: selling software to schools. Or perhaps we’ll see more learn-to-read kiosks appear in malls and airports. I dunno.

Pearson posted a report on its finances from the first-half of 2013: sales are up 5%. Its education division grew by 3%. Its education digital platform registrations up 19%. So far, it doesn’t appear that all these new education technology startups have disrupted Pearson yet. Hmm. Go figure.

The Next Web reports that the class notes marketplace Flashnotes has closed a $1.5 million seed round of investment and has acquired a rival startup, Noteutopia.

Edsurge reports that Ellevation, which offers ELL software, has raised $2.35 million in funding.

Margaret Spellings, President George W. Bush’s Secretary of Education, will be taking over the president’s foundation and policy institute this fall, according to The Huffington Post.

The Connecticut Supreme Court has decided that Paul Vallas can stay in office as Bridgeport’s superintendent of schools while he appeals a decision of a lower-court judge that ruled he was unqualified for the position and had to vacate it immediately.

Nate Silver is leaving The New York Times for ESPN. Let me echo those who really hope he’ll write more about education testing.

Sallie Mae and Ipsos Public Affairs released a survey this week about the amount that families pay for college, finding that the amount “leveled off for the school year that ended this summer after falling between 2009 and 2012. For the most recent year, families paid an average of $21,178,” writes Inside Higher Ed.

The OECD is weighing standardized testing higher education students around the world (because the whole PISA thing is working out so well, I guess). More details in The New York Times.

How much time do schools spend on standardized testing? According to a new report by the AFT, “The grade-by-grade analysis of time and money invested in standardized testing found that test prep and testing absorbed 19 full school days in one district and a month and a half in the other in heavily tested grades.”

Digital textbook provider Coursesmart has released its annual survey on digital textbooks and devices is out. Among the findings: 99% of students surveyed own at least one digital device, with 68% saying they use 3 or more devices every day. 79% of those surveyed say they’re using a digital textbook, up from 63% in 2011. More thoughts on the survey via The Digital Reader’s Nate Hoffelder.

The UK Department of Education has released statistics on the number of students expelled from primary schools, prompting some newspapers to offer some hand-wringing headlines about bad students and bad teachers.. But The Guardian offers a more measured analysis, as well as the data you can download and explore yourself.

College enrollment is down, and The New York Times is on it.

Stanford University says it is investigating a security breach of its technology infrastructure, and “as a precautionary measure, we are asking all users of Stanford’s computer system – that is, all those with a SUNet, or Stanford University Network, ID – to change their passwords.” More details via Techcrunch.

MIT President Rafael Reif has penned an open letter to explain why the university has intervened in a FOIA case for more information pertaining to the prosecution of Internet activist Aaron Swartz: “We are not trying to stop the public release of these documents. We are simply asking for the opportunity to look at them carefully so we can be confident that the proper redactions have been made, so that releasing them does not pose a risk to MIT employees who became involved in the case in the course of simply doing their jobs.”

The American Historical Association issued a statement this week on the embargoing of history dissertations. It “strongly encourages graduate programs and university libraries to adopt a policy that allows the embargoing of completed history PhD dissertations in digital form for as many as six years.” To do otherwise would spell DOOM! for young scholars. Or something. So much for the move towards more open access publishing, eh? Rick Anderson, Mills Kelly, Timothy Burke, William Cronon, Sherman Dorn, Adeline Koh, Dan Cohen, and much of academic Twitter have weighed in.