“In most contemporary educational situations where children come into contact with computers the computer is used to put children through their paces, to provide exercises of an appropriate level of difficulty, to provide feedback, and to dispense information. The computer programming the child.” -- Seymour Papert, Mindstorms 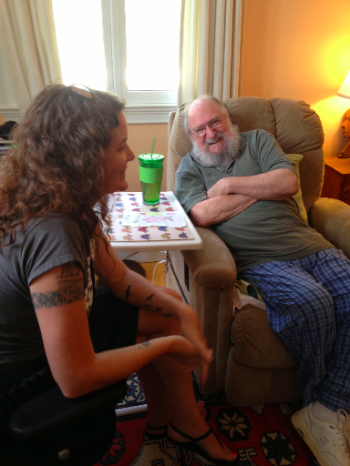 Read Mindstorms. No, really. I insist. Step away from ed-tech until you've done so. Read Mindstorms, then come back and let's talk. (Amazon Affiliate link)

I met the book's author, Seymour Papert, last week when I was in Maine and had the opportunity to thank him for the most important (or at least, my most favorite) ed-tech book, for Logo, and for all his work. It's been profoundly influential on my own.

His theories and his writing demonstrate such passion for learning and curiosity and discovery, such belief in the intellectual agency and capacity of children, such an incredible vision for what computers could mean for education.

It was really a special gift to get to spend some time with him.

I visited Seymour with my little brother and our friend Boston College professor Damian Bebell, both of whom stop by to see him regularly. In fact, my little brother had accidentially left behind his "figure eight" device the week before. He'd brought it to show Seymour, to talk about the mechanics of tree climbing and tree descent, along with plans for the treehouse he's building with my nephew. No surprise, Seymour had been intrigued by the metal clip, and Fred had inadvertently left it behind.

This time, Fred brought along the latest Mindstorms robotics kit (Disclosure: LEGO sent me a review unit, which I had shipped to Maine so I could elicit my nephew's feedback while I was visiting. A longer review, jointly written by him and me, is forthcoming.) We showed Seymour all the sensors and pieces and demoed a couple of the programs (which use a Logo-like language). Seymour poured over the manuals as Fred talked about my nephew's interactions with this, his first programming experience.

The first program in this new Mindstorms set tasks you with instructing a robot to stop its forward motion when it gets to within 30 centimeters of an object. Fred talked about how my nephew (age 7) and niece (age 4) thought that the sensor that this program utilizes looked like eyes. Indeed, its behavior -- "seeing" then stopping -- seemed completely "eye-like" to them. So the two of them were curious if the robot could see sideways or only straight ahead, and they devised an experiment: a maze to test the robot's peripheral vision.

A wonderful example of a constructivist/constructionist learning experience.

There's a line in a 2011 Wired Magazine article about Khan Academy where Bill Gates calls constructionism "bullshit." It's a line that's stuck with me because it makes me so damn dangry, no doubt, but also because it highlights Gates' dismissal of established learning theories, his ego, his ignorance.

And it highlights too, I think, the huge gulf between those like Gates who have a vision of computers as simply efficient content delivery and assessment systems and those like Seymour who have a vision of computers as powerful and discovery learning machines. The former does things to children; the latter empowers them to do things -- to do things in the world, not just within a pre-defined curriculum.

The desire for automated teaching machines is, of course, the subject of the book I'm writing. And I was thrilled to have a chance to talk to Seymour about it.

However, when I told him the book's title -- Teaching Machines -- and mentioned the name most associated with that term -- B. F. Skinner -- the room fell completely silent. And oh, how Seymour scowled.

I should interject here, for readers who are unfamiliar, that Seymour experienced a terrible accident in 2006. While his mind is still brilliantly sharp, communication is a struggle. 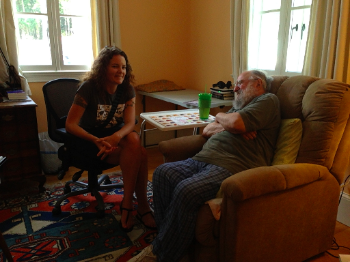 So when I say that I mentioned "Skinner" and that Seymour scowled, he really made it very very clear what he thought about the man and his theories. I quickly explained that my book would offer a critique of teaching machines, particularly behaviorist ones, and that I wanted to interrogate rather than simply advocate our push automate education.

Seymour asked why I was so critical of ed-tech (a question I get a lot), and I said that because so much of what I see runs counter to what he wrote about in Mindstorms, so much seems to merely digitize (if not automate) old classroom practices rather than facilitate transformative ones. I then pointed to Damian and joked, "I blame the psychometricians," and we all had a good chuckle.

That's probably the thing I'll remember most about my visit with Seymour: we laughed a lot. We laughed about this ed-tech time warp we're stuck in, where a book written in 1980 remains so relevant and so radical when it comes to computers and learning. I told him about my ride with Sebastian Thrun in the self-driving car, and we agreed, laughing, that the MOOC providers -- heck, everyone really, but particularly the ones who're making headlines these days with their claims of the latest education technology revolution -- desperately need to read Mindstorms.