Google announced Play for Education at Google IO, its annual developer event, this spring. Today the educational tablet initiative gets its official launch.

During its recent quarterly earnings report, Apple boasted that iPads have 94% of the education tablet market. It’s an impressive statistic, and not simply because Apple has almost entirely squeezed out all competitors since iPads first hit stores in the spring of 2010.

Apple’s continued dominance is impressive because iPads remain the more expensive tablet option, and – go ahead, ask any educator who has to manage tens or hundreds of devices for a school – they simply aren’t designed for school usage. Device administration – provisioning, syncing – is a challenge. Buying and installing apps, a pain in the ass.

In other words, iPads aren’t the ideal solution for schools. Not even close. But folks – lots and lots of folks, clearly – remain convinced they’re the best solution available.

It certainly hasn’t hurt Apple that its competitors have stumbled – fabulously – with their tablet rollouts. Microsoft tried to give away its tablet to all the attendees at ISTE’s annual conference in order to stir up educator interest, but ended up posting a $900 million loss due to “inventory adjustments” when Surfaces simply didn’t sell. Amplify, News Corp’s education wing, won a major deal with a North Carolina school district which bought $30 million worth of its tablets. But just a few months into the school year, the district has already recalled and returned the devices after widespread reports of broken screens and faulty chargers.

Apple can say glibly that their computers “just work,” and we all know it’s not quite that simple. They don’t always. Not really. But really, they often “just work” so much better than the alternative.

Despite Apple’s near monopoly of the education tablet market today, there is plenty of room for competition, particularly as more and more schools look towards 1-to–1 computing solutions (a result, in no small part, of the new Common Core State Standards’ requirement for computer-based standardized testing by 2014). Not everyone is going to "go Apple," particularly when so many have already "gone Google" with their cloud-based software.

And with that, we have Google’s unveiling today of its “Google Play for Education” – its play, pardon the pun, for the education tablet market, its Android-based store and tablet "solution."

There’s a fair amount here that other app stores – Apple iTunes, no doubt – already offer: the ability to find apps based on grade level and content area, for example. Google’s new app store also makes it possible to search for apps by a specific Common Core State Standard, a feature that isn't really too surprising considering the big ed-tech push to align apps and textbooks thusly. Google's app store also highlights apps that are ad-free and that are teacher- and/or Google-approved. (I can't help but think here, you’re meant to believe that there’s an educator's hand, not just a corporation -- cough cough Apple -- involved in what’s been approved for inclusion in the store.)

But most importantly -- most importantly practically -- Google has streamlined the app procurement process, making it much simpler for educators to buy apps with funds from multiple or different purchase orders and/or school and/or personal credit cards. That's step 1. 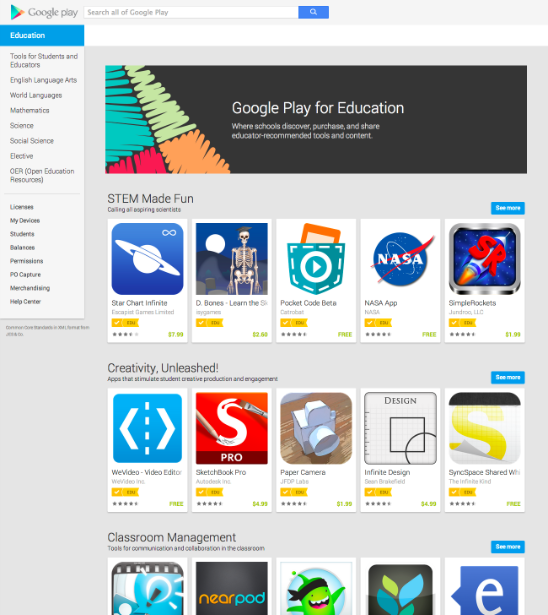 And then – oh! – the provisioning process.

As all of this is connected to a Google admin account, the system will prompt educators if they haven’t bought enough licenses for a class (Google knows how many students are in your class. Because Google knows).

The tap-to-install features, alongside the streamlined app purchasing process, means that teachers can – ostensibly, of course – buy and install apps during a class period. That is, if all the paperwork and payments are in order with Google HQ, a teacher can purchase and install apps for their class on the fly, rather than submitting a request with the front office to buy an app and/or gathering up all their students’ devices so that IT can commence a mass-installation process.

But again, it’s all part of a larger Google Apps administration. And there are trade-offs there as there are with any of these solution-providers. But for many schools that will lean towards an Android tablet solution, these are trade-offs that have already been made when schools "went Google."

The new Google Play for Education will be offered via three tablet options: the Nexus 7 which is available at launch today, along with an ASUS Transformer Pad and the HP Slate 8 Pro which will be available early next year. The price starts at $229 per tablet with a $30 per tablet management fee.

It’s a price point that’s certainly very competitive with Apple and with many of the tablet competitors out there. And no doubt, Google hopes to leverage those schools already using its Google Apps for Education software for either its Android or its Chrome OS hardware.

The search giant has been promoting Chromebooks for a couple of years now as a Web-oriented, cloud-based alternative to tablets. But now that schools seem so keen to adopt tablets, Google is hoping to serve that market too, thanks to its investment in Android. Out of beta today, Google Play for Education has a lot of the pieces in place to do that – it’s just a matter now of waiting for the developers (Apple still wins the numbers game here) and, of course, the hype and the actual customers to follow.